Is your seat belt on? Is it tight? Head restraint in position? Good, because otherwise you're going to suffer an awful case of nutrition-science whiplash and have to get fitted for a neck brace.

Well, an article (and two huge meta analyses) in the American Journal of Clinical Nutrition is saying "never mind" to all that. They're even suggesting that it would be better, obesity-wise and health wise, if food manufacturers replaced all the glucose-containing sugars in their products with fructose.

A Little Bit of Historical Perspective

Fructose was first suggested as an alternative sweetener for diabetics back in 1915, about the same time a pitcher for the Boston Red Sox named Babe Ruth hit his first major league homerun. This favorable view of fructose continued through the next 90 years or so, legitimized by its inclusion in the American Diabetic Association's recommendations for diabetics in 1979.

Quite simply, fructose led to lower blood sugar values than glucose-containing sugars, and this was confirmed with the advent of the glycemic index in 1981. Fructose had one of the lowest values, 20, whereas glucose and maltose clocked in at 100 and 105, respectively. (Generally speaking, the lower the value the better.)

The American Diabetes Association continued to recommend its use at moderate intakes until 2002. That's when a study came out – mind you, just one study – that suggested fructose might have an adverse effect on blood fats. The authors of that 2002 study also suggested that maybe the increases in societal obesity stemmed from the increases in the usage of fructose.

All dietary hell broke loose. Since then, nearly every diet expert, amateur or professional, has gone after fructose with the fury of prohibitionist Cary Nation.

Two new meta-analyses have jerked us back to pre-2002. The first of these analyses looked at 47 acute, randomized, controlled feeding trials involving 81 trial comparisons in subjects with and without type 2 diabetes.

It showed that substituting fructose for glucose in food over a dose range of 15 to 100 grams lowered post-meal glucose without an adverse effect on triglycerides.

The second meta analysis pooled the evidence from 11 chronic (longer use of fructose) randomized, controlled studies involving 14 trial comparisons with 277 subjects with or without diabetes:

"The substitution of fructose for glucose or sucrose over a wide dose range of 24 to 150 g/day in food or beverages improved glycated hemoglobin and fasting glucose without an adverse effect on insulin, blood lipids, or body weight, especially in participants with impaired glucose tolerance or type 2 diabetes."

The European Food Safety Authority pretty much concluded the same thing, and there are many other controlled chronic feeding trials involving over 1000 participants that led to fructose-induced improvements in "glycemic control" that were more effective than most of the anti-hyperglycemic drugs on the market.

The author of the article was acutely aware of its implications. He wrote that the new data "disputes the notion that there would be any advantage to the popular strategy of replacing fructose with glucose-containing sugars free of fructose (including glucose, maltose, and their many proxies such as brown rice syrup and barley malt syrup), as a means of mitigating the purported effects of glucose."

He also points out that replacing fructose with glucose-containing products also increases the GI (not good), while leaving the calories potentially higher because glucose is less sweet than fructose and as such takes more to achieve the same level of sweetness.

You should probably stop freaking out about fructose. It's probably "better" for your waistline than glucose or, as is commonly used in current products, "cane sugar." At worst, it might be on par with glucose-containing sugars.

However, there's still some evidence out there that fructose might affect certain genes that control brain function, but that's probably not even a consideration unless you're drinking liter-size bottles of Mountain Dew every day. 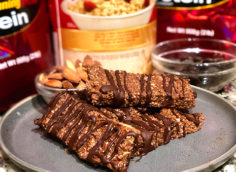 Use this easy recipe to whip up your own portable protein. No oven required.
Feeding the Ideal Body, Nutrition & Supplements, Protein, Recipes, Tips
Chelsie Lysenchuk April 29