Let's start by throwing out the terms "good" and "bad," because both coconut oil and saturated fat from animals have, in certain situations, both negative and positive consequences on health.

While saturated fat from animals is often demonized as causing heart disease, there is, in fact, no experimental evidence that links saturated fat to heart disease. All our fears are based on assumptions derived from casual observation.

But that's too simple a "truth." Other research has shown that ingesting saturated fat from animals reduces lipoprotein(A), a substance that's implicated in heart disease. Saturated fat also improves liver, brain, and lung health, along with contributing to stronger bones.

Coconut oil is equally enigmatic. There are at least five studies that show it has identical or better effects on health than other low-saturated fat oil like sunflower, peanut, or even olive oil.

But there are also several human studies that show coconut oil to have a negative effect on blood lipids, including LDL cholesterol, at least when compared to lower saturated-fat oils.

My best advice is to continue to moderate saturated fat intake while including coconut oil in your "starting rotation" of cooking oils, cooking with it one day, and then switching to olive and canola on subsequent days before using coconut oil again. 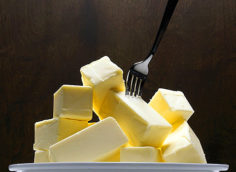