Poor old flaxseed was once a rising star in the nutritional world. It was touted as being the highest non-ocean source of omega-3 fatty acids, so if you didn’t like to eat mackerel, herring, or oysters every day, flaxseed was your girl.

But then people found out that flaxseed came with an omega-3 catch: It didn’t actually contain DHA or EPA, the omega-3s the human body needs. Instead, it contained alpha linolenic acid, which the body has to convert to DHA and EPA.

That might not sound like a big deal, but it turns out the conversion process is kind of a heavy enzymatic lift for the body, so much so that only 10 to 15% of the linolenic acid gets converted into DHA and EPA (the rest is burned as energy).

So flaxseed fell out of favor. It was left to molder on the shelves at Whole Foods, passed over for the younger and prettier chia seeds, but don’t worry, flaxseed isn’t vindictive like your ex. She’ll take you back, because that’s just the kind of big-hearted seed she is.

And while she may not have the omega-3 horsepower of her fishy friends, adding a daily teaspoon or two to your diet could improve your health considerably in the following categories:

Flaxseed, at least in animal studies, has proven to be effective in slowing the build-up of plaque induced by high-cholesterol and high-fat diets, in addition to lowering circulating levels of trans fats.

As far as human trials, flaxseed has been shown to significantly decrease systolic and diastolic blood pressure, so much so that it led to a prediction of a 50% decrease in the incidence of heart attack and stroke.

A review of ten human trials led to the conclusion that flaxseed reduced the rate of tumor growth in women with breast cancer. Cancers of the prostate, lung, colon, ovary, endometrium, liver, and cervix have also been inhibited by flaxseed.

Women involved in a 12-week, randomized study found that dietary flaxseed oil led to a significant decrease in trans-epidermal water loss, skin roughness, and scaling, with an increase in skin hydration and fullness.

Because of its high fiber content, flaxseed has shown a lot of promise in giving relief from constipation, in addition to reducing symptoms of irritable bowel syndrome (IBS). It also appears that it’s fermented in the gut and leads to the formation of short-chain fatty acids, which may favorably alter the microbial microenvironment. 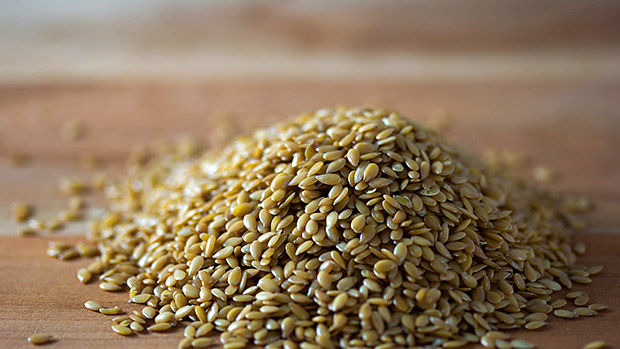 While we generally think of flaxseed in its whole-seed form, it’s also available in ground form, as flaxseed oil, and as partially defatted flaxseed meal. More recently, a “milk” form has entered the market to compete with almond and oatmeal milk.

The latter iteration is fast gaining popularity as it contains no cholesterol or lactose, is suitable for people with soy, nut, or gluten allergies, and is more healthful than almond milk.

I prefer the ground form, though, as it adds a slightly nutty flavor to foods. Crushing the outer seed also makes both the ALA and the ecoisolariciresinol diglucoside (SDG), flax’s predominant antioxidant polyphenol, more bioavailable.

However, crushing the seed through grinding also exposes these chemicals to oxidation, so ground flaxseed needs to be kept in the freezer to preserve its magic.

What are the Naysayers Going to Point Out?

Every nutrient or food seems to have its detractors, and flaxseed is no exception. They’ll tell you that the protease inhibitors, phytic acids, linantine, and cyanogenic glycosides found in flax make it impossible or unlikely that the body will be able to absorb and benefit from it.

They’re right in theory, but wrong in practice, as several studies have reported no deleterious effects from these flax components.

Other party poops will complain about the cyanide formed in the gut when flax is ingested, like cyanide ever killed anybody. Okay, it has, but this isn’t an issue here. Taking one to two teaspoons of flax will result in about 5-10 mg. of hydrogen cyanide being manufactured, but the human body can easily detoxify up to 100 mg. of cynanide a day.

Just keep your flax consumption down to less than a kilogram a day (2.2 pounds), which I wouldn’t think would be an issue.

To reap the benefits of flaxseed, add a teaspoon or two a day to anything that might benefit from its texture or taste, from oatmeal to salad or yogurt to soups. Start slow, though, as your gut may rebel against such a big dose of fiber if it isn’t used to it.