About 10 or 15 years ago, research came out suggesting that eating chocolate was good for you. It supposedly had something to do with positive effects on arachidonic acid metabolism and the health of the human heart.

People went nuts. Men and women who'd gone to great lengths to hide their Russell Stover assorted chocolates box for years could now store them openly on the same shelf as their spirulina. Citizens of Hershey, Pennsylvania rejoiced. Willy Wonka gave raises to all the Oompa Loompas and they all went on a weeklong bender.

People who took the advice to heart lived happily ever after. Until they died. Except for all the obesity, diabetes, and atherosclerosis in between.

As usual, the humans misinterpreted the information, ate lots of chocolate, and essentially invalidated what was initially good advice by growing less healthy instead of more healthy. The thing is, eating a chocolate bar every day can be hugely beneficial to human health in a number of ways, provided you're eating the right kinds of chocolate or chocolate bars. It can also have various bodybuilding benefits, too.

Years ago, pretty much your only choice was buying milk chocolate bars because Europeans ate dark chocolate and Americans ate milk chocolate, thank you very much, you commie bastard.

The trouble is, the darker varieties of chocolate are the healthful ones since they have a lot more of the juicy polyphenols we want, in addition to containing more caffeine, which acts synergistically with the polyphenols. The cocoa polyphenols increase the cognitive-enhancing effects of caffeine while simultaneously reducing its jitter-causing effects.

Old-fashioned American chocolate bars were also confectionerily jacked up with lots and lots of sugar, in addition to worrisome amounts of heart-gunky trans fat. As a result, they probably inadvertently negated any of the healthful effects of the limited amount of cocoa polyphenols they contained.

Some of the newer chocolate bars have fewer of these nutritional drawbacks. Play it safe, though, by looking for bars with the following properties:

Luckily, many of the new keto chocolate bars on the market fit the bill and use, as a bonus, either natural sweeteners or no added sugars. Eating one (a small one) or half of a larger one every day should pose no problems and actually be healthful, as long as you take into consideration their high-fat content and make adjustments elsewhere in your diet. 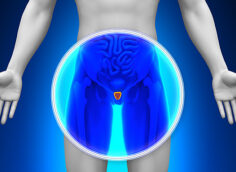 Insure sexual health, pee like a teenager, and maybe even live longer. This lycopene-rich juice can help... and it's not tomato juice.
Nutrition & Supplements
Chris Shugart November 26