Most moviegoers have seen the highly acclaimed film, "The Martian." In it, Matt Damon's character is stranded on Mars and his only hope of survival lies in his ability to "science the shit" out of the situation. He's only got a limited amount of rations, but among them is a package of potatoes. He avoids starvation by slicing them up and growing them in soil comprised of Martian dust and his own feces.

While it looks like he did indeed science the shit out of the situation, it's unlikely that growing potatoes would have been possible unless NASA had stocked his spaceship with organic potatoes. Nope, Matt Damon should have starved, his emaciated corpse propped up against the wall of his greenhouse, forever scanning the ground for the green sprouts that would, alas, never come.

The scary thing is this: If an Earthbound counterpart ate as many non-organic potatoes over the course of a year as Damon's character did, it could have seriously damaged his health. Here's why.

What makes Damon's situation so improbable is that the vast majority of potato farmers bombard their potatoes with chemicals, first while the spuds are still in the ground and again after they come out. These chemicals aren't meant to kill bugs, though. Instead, they're meant to prevent the potatoes from sprouting "eyes" so they'll have a much longer shelf life. And, if they don't sprout eyes, you can't propagate them and survive on Mars.

Infinitely worse than semi-sterile potatoes, though, are the chemicals they use to achieve that effect. One of them is maleic hydrazide, and it's applied to potatoes while they're still growing. Current EPA guidelines prohibit its use within seven days of harvest, or allowing livestock to graze or forage on treated areas. This seven-day period gives the chemical enough time to penetrate the interior of the potato instead of remaining on the leaves or the stem where it can get into the bloodstreams and fat reserves of any farm animals misfortunate enough to have nibbled on them.

Once the potatoes are harvested, they're cleaned up and sprayed with another chemical called chlorpropham, again to prevent the tubers from sprouting eyes.

The trouble is, both of these chemicals interfere with the cellular mitosis, or cell division, of plants. Interfering with cellular division inside the plants may be acceptable, but you certainly don't want to ingest any chemicals that are harmful to humans.

To be fair, it's uncertain as to whether or not these chemicals interfere with human cellular division, but there's some evidence that they at least interfere with mitosis in human lymphocytes, and that ain't good.

Additionally, even the EPA seems to be a little worried about these chemicals. Case in point, while they insist chlorpropham is non-carcinogenic, they admit that it does have its unspecified risks and that the tolerance value of picked potatoes should be reduced from 50 PPM (part-per-million) to 30 PPM.

Sure, you're thinking that you can just wash or even peel your potatoes to ensure your safety. That may work in the case of chlorpropham, which is just sprayed on the surface of the plants, but it won't work all that well with the maleic hydrazide, which is absorbed into the potato. There's at least one study that shows that the maleic hydrazide residues in potatoes after cooking don't vary much with residues before cooking. 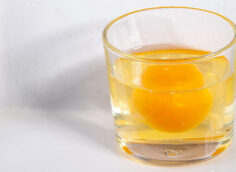 Athletes and bodybuilders used to drink raw eggs. Then we decided that was stupid. Now, a new study shows that maybe it wasn't. Check it out.
Dietary Myth Busting, Protein
TC Luoma September 22