I don't know about you, but every time I eat fish, I feel kind of good about myself. I feel kind of like what it must feel like to get blessed by the Pope, only with plenty of essential fatty acids and creamy tartar sauce.

I don't, however, feel quite as nutritionally virtuous when I take a slab of mahi-mahi, dip it in an egg wash, body slam it into a heap of panko breadcrumbs, and fry the bastard; not like I might if I wrapped it up in some organic banana leaves and steamed it in a bamboo basket while listening to some pan-flute music.

So it's inevitable that when I cook fish any other way than by steaming it, part of me worries that I've ruined its fatty acid profile and made it unhealthy in general.

It turns out I was worrying for nothing because a rigorous study about the effects of different cooking techniques (pan frying, baking, broiling, microwaving) on fish indicates that except for instances when I might use the wrong cooking oil, it doesn't much matter how I cook my fish; it's all pretty good, as far as retaining those coveted fatty acids.

Katrina Flaskerud and her fellow scientists from the University of Minnesota wanted to examine how cooking affected the polyunsaturated fatty acid (PUFA) content of fish, along with how varying modes of heat affected the production of oxylipins.

For those who aren't familiar with them, oxylipins are a family of oxygenated natural products that are derived from PUFAs when you expose them to heat or various chemical reactions.

But back to the study. Trout fillets were baked, broiled, microwaved, or pan-fried in corn oil, canola oil, peanut oil, or high-oleic sunflower oil. The scientists then measured the PUFA and oxylipin content of each sample and compared them to raw fillets.

Each test was repeated three times, but before you dismiss the study because they used trout and who the hell eats trout, consider that trout has more omega-3s in it than a lot of fish that are noted for their high omega-3 content; fish like herring, sardines, albacore tuna, and yes, salmon.

My point is this: It's fair to assume that the results seen with trout are probably representative of what you'd see with other types of high omega-3 fish.

You also have to remember that the scientists are from Minnesota, land of 10,000 lakes. My God, they probably can't pull out of their garages without having a trout jump out of a lake and hit their windshields. It would have been practically criminal if they'd chosen some other type of fish. 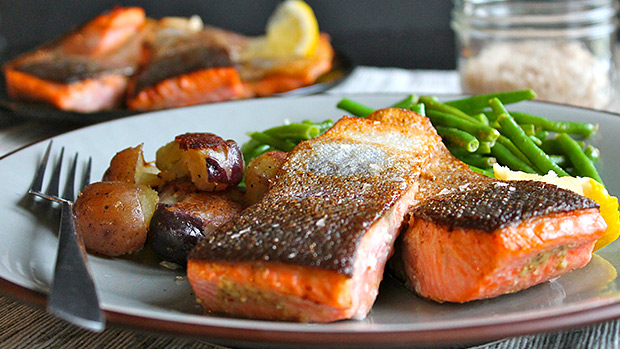 The PUFA content of the various samples wasn't altered when samples were baked, broiled, microwaved, or pan-fried in corn oil or canola oil.

The results of this study are excellent news for fish eaters, or for people who would be fish eaters if they could just fry the damn thing. Apparently, the only cooking style you should avoid is pan-frying in peanut oil or high oleic acid sunflower oil.

Having said all that, frying, regardless of the oil used, can be potentially problematical in a couple of other ways. For one, any time you expose any kind of animal protein to high heat, you risk the formation of carcinogenic chemicals known as of heterocyclic amines.

There's also the potential for protein oxidation, which has to do with the oxidative degradation of particular amino acids, leading to possibly cytotoxic and mutagenic free radical species, but to be fair, protein oxidation can affect any type of fish (or meat in general) between the moment the fish died and up until it's swimming through your digestive juices.

Don't worry, though. Both of the aforementioned concerns – heterocyclic amines and protein oxidation – can be mitigated or even eliminated by using various polyphenolic spices like marjoram, sage, thyme, oregano, rosemary, turmeric, curry powder, chili powder, black pepper, parsley, ginger, and probably a whole lot of others.

Just sprinkle one or more of them on your fish during or after preparation.