Burn Twice as Much Fat?

News of a recent study popped up on a lot of my news apps and each of them featured some variation of the following headline:

"Men exercising before breakfast burn twice the fat and have 'profound changes' on health, says study."

Besides, the study seemed to confirm what many in the fitness biz still believe, that pre-breakfast cardio burns a lot more fat than cardio done some other time, but as I read on, my hope turned to ashes.

Oh, the obese men in the study who exercised before their cornflakes and toast breakfast (no lie) actually did burn twice as much fat as those who exercised after, but "the pre-breakfast exercise routine did not translate into more weight loss."

Hel-lo? It didn't translate into more weight loss? Isn't that the whole point? Apparently, this double amount of fat burning, while it apparently happened, could seemingly be measured only by a yet-to-be-invented, incredibly sensitive bathroom scale, one capable of weighing zeptograms, which are a billion, trillion times lighter than a gram.

Congratulations fat bastards in the study, your fasted cardio resulted in the loss of several zeptograms!

Anyhow, back to square one. Fasted cardio doesn't work. But let's take it a step further. As far as fat loss in general, cardio is itself a hugely inefficient and dumb fat-loss method, regardless of what ex-gulag commandant Jillian Michaels says. You'd be far better off taking a different approach.

Let's say one day you get all inspired to find out whether you actually have abs underneath all that flab or if they're just apocryphal, like the Yeti or the final book in the Game of Thrones series.

Heroically, you decide to add another 20 minutes of treadmill work onto the end of your weight workouts. You're in pretty good cardiovascular shape, so you run at a pace of 6 miles per hour. And, because you're so determined, you do this six days a week.

Assuming you didn't miss a day, didn't eat any additional calories during that period, and were able to fight off the increased hunger from doing all that additional work, you'd supposedly burn approximately 5,500 calories in a month's time (229 calories burned in 20 minutes multiplied by 24 days).

Using the traditional "3500 calories equals a pound of fat" rule, you'd have lost a little over a pound and half of fat. If you continued on the same route for six months, you'd presumably lose about 9.5 pounds of body fat.

Not bad! Unfortunately, it doesn't work quite that way.

The "3500 calories equals a lost pound of fat" rule only applies for the first few weeks of a diet or weight-loss plan. A mathematician by the name of Kevin Hall, PhD., figured out that over the course of a year, people only lose about half of what's predicted using the outdated 3500 calorie rule.

In effect, the real number of calories you need to lose to rid yourself of a pound of fat is about 7,000. That's because the old 3500-calorie rule fails to take into consideration that the body pivots and adapts in a number of ways to minimize or even erase the effects of reduced caloric intake. It also doesn't account for gender, or the fact that the metabolic rate drops as body weight decreases.

Therefore, at the end of those six months of running to nowhere, you'd likely have lost closer to 5.5 pounds instead of the 10 or so predicted by the old 3500-calorie rule.

Using cardio as a pathway to abs or hunkiness in general is a lousy, inefficient way to do it. Granted, cardio can burn a lot of calories, but it would require doing crap like you see in the CrossFit Games, or swimming across the English Channel while towing a barge full of naked ladies cheering you on, and both on a daily or at least regular basis.

If you have the drive to actually pull any of that off – while not losing a substantial amount of muscle along the way – you're a better man than I am, Gunga Din.

I know that accepting this inconvenient truth could theoretically put thousands of inept personal trainers out of work, but it's better to face reality. The only legitimate, sustainable way to lose substantial amounts of body fat is through plain old calorie restriction.

Consider this: If, instead of doing 20 minutes of hard cardio, you decided to have just one tablespoon of olive oil on your vegetables instead of the three you normally dump on them, you'd have avoided close to 240 calories, which is more than what you'd burn on the treadmill in 20 minutes.

If you substituted the cup of raisins you throw in your morning oatmeal with a cup of raspberries, you'd have saved yourself from over 400 calories, which would take over 40 minutes of running to burn.

Maybe you have a couple of fancy IPA beers after dinner. Calorically, they're the equivalent of a Big Mac. If you just swapped them out for a single, ordinary, mass-produced TV commercial beer, you'd again have accomplished the same thing as doing 20 minutes of hard cardio on the treadmill.

The aforementioned examples of simplistic substitutions obviously isn't meant to be a very encompassing list, but just an attempt to maybe get you to agree that the amount of calories lost or saved by simple dietary manipulations is a lot more effective than doing cardio.

But if making substitutions every day requires too much thought, do the Velocity Diet for month, or just go "zero" or low carb for a few days or weeks (not that I think there's any special magic in avoiding carbs; it's just an easy way to cut out calories); anything except doing the treadmill every day or flailing around like a damn fool with the battling ropes or NordicTrack St. Vitus' dance elliptical emulator.

I'm gonna 'fess up. I do cardio. Regularly. But I do it for my ticker and to build work capacity, not to lose fat. I get lean by 1), trying to build muscle so that my metabolism increases and my body burns more calories just by existing, and 2) by saying no thanks to seconds at dinner.

Cardio can help, of course, as can fat-burning supplements or supplements that increase nutrient partitioning or insulin sensitivity, but simple calorie restriction has to be part of that.

Stop being a sucker. 73% of the olive oils on U.S. shelves are counterfeit or inferior. Here's what you need to know.
Feeding the Ideal Body, Nutrition & Supplements, Olive Oil, Tips
TC Luoma October 7

Tate's here to school you on the finer points of bulking and cutting. Get the details on getting jacked and shredded.
Diet Strategy, Feeding the Ideal Body, Nutrition & Supplements
Nate Green & Dave Tate August 23 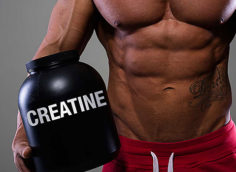