I used to cover pro bodybuilding shows for the various newsstand magazines. Yeah, I know. Don’t rub it in. At least it beats embalming corpses. Probably.

Anyhow, after a show, the assorted “journalists” and photographers would gather in hotel bars and some fool would invariably start comparing the modern physiques with those of the past, probably similar to baseball writers sitting around after a game debating whether Mike Trout is better than Willie Mays.

The general consensus was nearly always that the boys from the Golden Age of bodybuilding – guys like Arnold, Zane, Dickerson, etc. – were much more symmetrical; that they actually had waists instead of something that looked like what the Nazis used to fortify their underground bunkers.

We chalked up that lack of narrow waists to drug excesses. The growth hormone the modern-day guys used was indiscriminate in its effects; it made lots of things grow bigger; not only their muscles, but their skulls, their joints, and, apparently, their visceral organs too, thereby forcing their trunks and waists to balloon outwards to make a mockery of symmetry.

At least that’s what we thought. Hell, that’s what everybody thought. It turns out, though, that something else might also be playing a role in making those visceral organs grow and distending those mid-sections, something that many non drug-using recreational lifters might be vulnerable to: Excess protein.

I kid you not. It’s what Paul T. Reidy from the kinesiology department of Miami University in Ohio just theorized in a recent edition of The Journal of Nutrition. 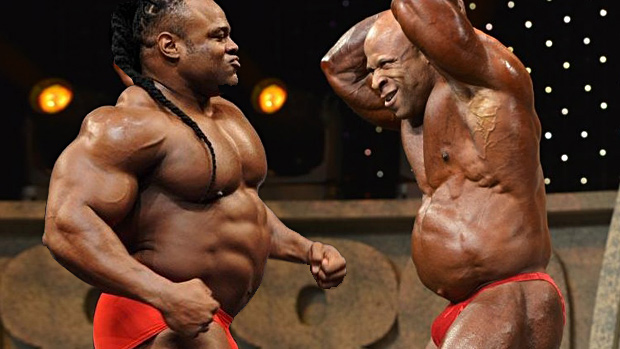 Before you freak, I need to let you know that the amount of protein Reidy feared might cause visceral organs to grow is above the daily 1.6 grams per kilogram that most of us in the strength and bodybuilding business recommend.

So relax. At least for a few minutes.

In his commentary, Reidy writes that while sports nutrition has made progress in determining protein requirements, their “hyperfocus on skeletal muscle has gradually overlooked the protein metabolism of the body as a whole.”

Reidy was particularly interested in a 2019 study that involved a group of experienced lifters who habitually ingested roughly 2.4 grams of protein per kilogram of bodyweight.

The scientists, in their analysis of the lifters, used a method called “indicator amino acid oxidation” (IAAO), which, instead of using muscle biopsies, is only minimally invasive and tracks levels of an “indicator” amino acid.

Reidy explains that the 2 grams per kilogram number is puzzling because, normally, resistance training increases the body’s amino acid efficiency for MPS. For one thing, lifters appear to get better at intracellular recycling of protein after about 3 months of lifting, but for some reason, the lifters in the aforementioned 2019 study required even more protein to reach maximum MPS, despite being presumably more efficient at recycling it.

Where Was All That Extra Protein Going?

So here’s the dilemma: Why did these lifters supposedly need 2.0 grams of protein per kilogram to maximize whole-body MPS when they should have displayed more efficient protein metabolism?

Where the hell was/is all this extra protein going?

Sure, some of it was likely being oxidized, but Reidy thinks a lot of it was going to making their internal organs bigger.

He thinks that research in general is plagued by investigators referring to total lean mass as an indication of muscle mass based on changes of lean mass in the trunk region, which of course houses the viscera.

Reidy believes they should instead rely on changes in appendicular (arms and legs) lean mass, which is more likely to reflect changes in functional muscle caused by resistance training.

He explains that while rarely reported, studies that look at changes in lean body mass after resistance training and protein supplementation report that over half of the increases in total lean mass are a result of increased lean mass in the trunk, where the visceral tissues reside.

In other words, researchers are attributing changes in lean body mass solely to muscle when the results indicate that some of those lean mass changes are possibly attributable to increased growth of internal organs.

He concludes with the following thoughts:

“We may possibly consider that protein intakes above 1.6 grams per kilogram may serve to promote visceral organ hypertrophy… if so, what are the acute and chronic effects and implications for long-term health?”

What to Make of This Disturbing Theory

Reidy may be onto something. As evidence, take a look at the old-time bodybuilders I talked about in the beginning of the article. They didn’t take in anything close to 2.4 grams of protein per kilogram. Sure, they had protein powders, but they were crude, had low bioavailability, and tasted awful.

Instead, these comparatively wasp-waisted bodybuilders ate food, which makes it a lot harder to take in large amounts of protein. You can bet their protein intake was a lot closer to the 1.6 grams per kilogram recommended by most experts instead of the 2 to 3 or even 4 grams per kilogram ingested by today’s monsters.

Maybe that explains why the Golden Agers didn’t grow big, disproportionate guts. Of course, we can’t ignore the fact that, unlike today’s lifters, the old-timers didn’t have access to GH, which also appears to play a role in the growth of visceral organs.

So yeah, many of the distended guts we see nowadays may indeed be attributed, at least in part, to the GH used routinely by today’s top bodybuilders, but a part of that commonly seen 7-month’s pregnant look might also be attributable to long-term “protein overdose.”

If so, let Reidy’s observations stand as a warning to those of us who think the more protein, the better. “Protein gut” isn’t only esthetically displeasing, but it might also have long-term health implications.