You know what chafes me? It's the mutts who are always tweeting about how they don't need supplements and that we should instead get all our nutrition from "whole foods."

They think all "processed" things are bad. I'm guessing they also wear underpants made from the natural, un-dyed wool shorn of virgin yaks and their houses are constructed of organic hemp panels glued together with woodpecker spit. They're paragons of wholesome naturalness.

The "whole foods only" cliché is nutritional virtue signaling at its worst, a sad attempt to prove that the people who say it are more nutritionally pious than their peers, but let me smack them across the face with a cold, line-caught herring of truth:

Biotest's Superfood is a great example. Granted, it's only minimally processed – an array of 18 strategically chosen freeze-dried fruits and vegetables – but the whole-food absolutists still paint it with a horsehair brush as a processed food.

Fine. Stick with your labels, but I'm here to tell you that Superfood is one food that every human being should be taking to improve their health, longevity, and, to those for who it matters, athletic ability.

Take a look at the ingredients:

One of the reasons I'm such a big fan of Superfood is because I'm high on the science of polyphenols, which are plant-derived, bioactive compounds that can repress inflammation by inhibiting damage from free radicals and interacting with the immune system, thereby conveying such health benefits as lowered blood pressure, lessened endothelial dysfunction, reduced cholesterol, lowered risk of type 2 diabetes, lowered risk of cancer, and even improved recovery from training.

You know how nearly every other article you read says you should eat, I don't know, yams or some other vegetable or fruit for this or that benefit? Despite what most novice nutritionists think, it's not because they contain riboflavin or some other vitamin or mineral.

Don't get me wrong, those vitamins and minerals are super important, but the real magic of vegetables and fruits are in the polyphenols they contain and Superfood is possibly the richest, most diverse, and most condensed source of polyphenols on the planet.

There are two really broad classes of these polyphenols – flavonoids and nonflavonoids. The flavonoid group can further be broken down into six dietary groups:

The non-flavonoid group can also be broken down into three different classes:

All of these classes of polyphenols are present in Superfood.

Polyphenols are most famous for being general antioxidants. Got a free radical spillage on aisle 3? Send in the polyphenols to mop things up.

We measure how potent an antioxidant is by something called the ORAC scale, which is a standardized test used by the USDA to measure the Total Antioxidant Potency of foods and nutritional supplements. The term stands for "Oxygen Radical Absorbance Capacity," and the measurement is expressed as ORAC units per 100 grams of a given compound.

For instance, the USDA determined an "average serving of fruits and vegetables" has an ORAC rating of between 400 and 500. But all fruits and vegetables aren't created equal. Some, like coffee berry, acai berry, and goji berry (all of which are in Superfood) are off the chart on the ORAC scale.

So just what is the ORAC rating of just one serving (two scoops) of Superfood? 5,315. That means just one teaspoon of Superfood has the antioxidant equivalency of eating between 10 and 12 average servings of fruits, berries, and vegetables.

But the reality of polyphenols is a hell of a lot more complex than just mopping up free radicals. Some actually modulate gene expression, whereas others have a direct or indirect effect on hormones and various metabolic pathways.

As such, foods rich in polyphenols like those found in Superfood have been found to be protective against a multitude of diseases. In addition to their cancer and diabetes fighting abilities mentioned above, some individual polyphenols like lycopene and lutein (both of which are abundant in Superfood) have garnered acclaim as potent protectors of, respectively, the prostate and the eye (vision, specifically).

Polyphenols have even been found to have a role as sport supplements, with effects ranging from...

So you're probably wondering how it is that two scoops of Superfood can be roughly equivalent to 10 or more servings of fruits and vegetables. It's because each of the ingredients in Superfood has been freeze dried.

Freeze drying is a process by which nothing but the water is removed from the fruits and vegetables. Each product is individually quick frozen so all water turns to solid ice. It's then subjected to warm temperature and a vacuum so that the water turns to vapor and is essentially pulled out of the fruit or vegetable, leaving everything intact.

That means the pigments and phytochemicals have been well preserved and that the ingredients retain the identical phytochemical content, enzymatic activity, and bioactivity of fresh products.

All you need is one small serving per day (two scoops). Superfood is a highly concentrated, powdered supplement with a mild, natural flavor, much like an unsweetened berry tea. It can be used in a number of ways:

So to get back to what I was saying earlier, yeah, I guess Superfood isn't technically a "whole food," but it's minimally processed.

Besides, it would probably cost you about 20 bucks a day, not to mention suffering from a perpetually stuffed and bloated stomach, to eat all the foods in Superfood in non freeze-dried form.

And good luck sourcing "whole" ingredients like real wasabi and coffee berries. So yeah, this stuff is superior to "real" food. 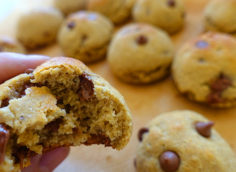 These high-protein cookies will make you as happy as a stubby guy on squat day. Get the simple recipe here.
Feeding the Ideal Body, Nutrition & Supplements, Protein, Recipes, Tips
Gareth Sapstead May 2