What Exactly is a Processed Food?

Clearly, your great-great-great mee-maw would take one whiff of the contents of a can of Cheeze Whiz, muster up a huge phleghm ball, and hawk it at the mangy redbone hound that keeps snuffling through her pile of potato peelings.

Neither would she likely have much regard for most breakfast cereals, anything made by Hostess, the meat and organ slurry that constitutes chicken "nuggets," or little of anything that came from outside the produce and meat aisle of the average grocery store.

Still, we need to pin down exactly what a processed food is because there are, health-wise, benignly processed foods and malignantly processed foods. For example, roasted nuts are processed, but the degree of processing is so slight as to be insignificant or non-existent.

On the other end of the spectrum are things like the aforementioned Cheeze Whiz, Hostess products, or the perverse avocado-free guacamole that's made of modified food starch, corn syrup, and green food coloring. Ice cream, too, is processed, but the best of the bunch are minimally so, containing only cream, eggs, and sugar, as opposed to the chemical United Nations of crap that are most ice creams.

For the sake of clarity and accuracy, let's focus on those foods that are malignantly processed.

In a recent editorial published in JAMA Pediatrics, pediatrician Robert Lustig argues that processed foods have hurt Americans in several ways, from increasing their intake of refined carbs to causing the rate of diabetes 2 to skyrocket.

I'll go even further. Processed foods are to blame for most every nutritional problem humans have, along with a good percentage of any medical problems they might have. Lustig went on to outline a number of ways processed foods differ from unprocessed foods, all of which are undesirable. Here are some of the things he pointed out, including a few things he missed.

When food manufacturers process a food, they often rip out most or all of the fiber because it's indigestible (which is the whole point of fiber) and can affect taste or consistency and hinder them from shaping the food into cute little shapes that blur the line between food and a child plaything, which must be particularly egregious to people who come from places where starvation is routine.

The trouble is that you need fiber. It feeds beneficial bacteria and it slows the absorption of food so that insulin levels are modulated. It also gives form to your feces so they can torpedo through your bowels quickly and efficiently.

You need between 20 and 30 grams of fiber a day, but most of us don't eat half that much, thanks to processed foods. To get your dosage, you need to eat the ultimate unprocessed foods: whole fruits, vegetables, nuts, and seeds. Barring that, load up with Metamucil.

If a food seems to melt in your mouth, it's deemed to have "vanishing caloric density." Foods with this characteristic fool the brain into thinking that it hasn't ingested any calories, so the biochemical impulse is to keep snacking away.

It gets worse, though. Foods with this characteristic are digested rapidly – faster than sugar – thus eliciting an insulin tsunami. Performed often enough, this insulin tsunami ultimately carries away your waistline, your metabolism, potential girlfriends, and your health. Ditch the processed foods and consider taking cyanidin 3-glucoside to repair your crippled insulin sensitivity.

Have you ever experienced tendonitis? That's simply chronic inflammation. How about muscle soreness? Same thing. A certain degree of inflammation is essential for healing, but chronic inflammation, often caused or exacerbated by malignantly processed foods, is at the root of most of human maladies. And much of that can probably be linked to ingesting too few omega-3s.

To remedy this, step one is to stop eating processed foods. Step two is to eat more cold water, fatty fish (non-farm raised), or take a smartly designed omega-3 supplement like Flameout®.

It's bad enough that processed foods contain too few (if any) omega-3 fatty acids, but replacing them with cheaper omega-6 fatty acids (which also gives them longer shelf life) is really flicking the poor-nutrition scab.

Humans originally consumed a natural diet of a 1 to 1 or 1 to 2 ratio of omega-3 fatty acids to omega-6 fatty acids. Unfortunately, largely because of extreme food processing, the modern ratio of omega-6 to omega-3 is a disaster. The half-time score is now 20 or 30 to 1, and omega-3's quarterback has dislocated all four limbs and suffered a displaced head.

To have any chance of evening up that ratio, you need to do a nutritional hail Mary and throw most processed foods into the wide-open garbage pail.

Food manufacturers often need fat to be more solid, so they created a process whereby extra hydrogen is added to liquid omega-6 oils. These are identified as "partially hydrogenated oils" on the labels of processed foods. They're also known as trans fats and, because of their molecular configuration, the body can't break them down.

The trouble is, most of these fats are generally inflammatory. They also have the nasty habit of gumming up your arteries so that every time your heart beats, it sounds like a sweaty fat guy peeling off a rubber wetsuit.

You may have heard these fats were banned. It's true, they were banned, but manufacturers have until June 2018 to comply. That leaves us with plenty of artery-clogging, liver-inflaming months to go.

We all know that processed foods contain precious few vitamins and minerals, save those that were perversely added back in after they were initially ripped out during processing. The trouble is, it's unlikely that vitamins work in a vacuum. More likely they require all the other hundreds or even thousands of other nutrients and micronutrients found in whole foods as teammates or co-factors.

Adding in, say, just some vitamin C or E is just nutritional cherry picking. It's like giving someone just an engine when they need a car. The engine is crucial, but you also need a chassis, a drive train, a transmission, wheels, and a place to sit your bum. Same thing with individual vitamins; you probably need all the nutritional micronutrients or phytonutrients that are present in whole food.

In another example of food processing gone awry, consider fat-free milk. When they take the fat out of the milk, they remove all the fat-soluble vitamins like A and D, which are then added back in. The trouble is, since the milk is now fat-free, the gut won't absorb the fat-soluble vitamins. It's like giving a castrated man birth control.

Manufacturers often add compounds to their product in order to extend shelf life and keep foods from separating into a gloppy mess. Great, but these compounds, known collectively as emulsifiers, appear to be contributing to the rising incidence of obesity, metabolic syndrome, inflammatory bowel disease, and inflammation in general.

What they do is muck up the gut's protective layer, in addition to disrupting the bacteria normally present in the gut. Something about the emulsifiers reacts negatively with the microbiota and how they interact with the digestive system. Sending in some counterrevolutionary troops in the form of probiotics like sauerkraut would help fortify the bacterial Maginot Line, but you won't win the battle until you ditch the processed foods.

Yeah, processed foods contain a lot of salt to preserve and tasty-up their abominable foods. While the average American needs about 500 mg. a day, processed foods are largely responsible for escalating the American average to 3400 mg. a day. The net effect is that we're more salted and pickled herring than we are human.

While the old school medical community blames salt for contributing to high blood pressure and heart disease, more progressive medical types are starting to think the association might be tenuous if not downright bogus. Still, no one needs 3400 mg. of salt a day, so we'd be wise to chop away at that salty number.

Less discussed, though, is the fact that the salt used by food manufacturers is non-iodized. That's a problem because the main sources of iodine are seafood and iodized salt. If you don't get much seafood and you don't use iodized salt, you're vulnerable to iodine deficiency, which results in goiters, thyroid nodules, a malfunctioning metabolism, and poor health in general.

If you depend on a lot of processed foods, you should consider taking an iodine supplement or start using iodized salt on whole, unprocessed foods that require seasoning.

9. Too many artificial ingredients.

There are an estimated 6000 different chemicals commonly used in the processed food industry. They're used to give food color, to stabilize its structure, to give it texture, to bleach it, to soften it, to preserve it, to sweeten it, and even to hide unpleasant odors. Oh yeah, they're used to add flavor.

While the average ingredient label of some of the most highly processed foods will scare the bejesus out of most of us, chances are that the food in question contains more artificial ingredients than indicated on the label. Because of the way labeling regulations are written, a term like "artificial flavor" is deemed a proprietary blend and could encompass ten additional unrevealed chemicals.

All of these ingredients are allegedly tested for safety, but who the hell knows what the long-term effects are? Who the hell knows whether these chemicals, when combined, exert drug-like effects, and not fun kaleidoscope, Lucy in The Sky With Diamonds effects, but grow-a-huge-honkin' tumor effects?

It doesn't take a great leap of faith to figure that all these chemicals must, ultimately, damage the body in some way, and that it'd be best to avoid them when possible.

The pitfalls of processed foods are obviously many, but again, keep things in perspective. Your cup of coffee qualified as processed because the beans were ground up. Your protein drink wouldn't be possible without some processing, although, hopefully, the manufacturer did its best to keep it free of most horseshit additives.

The point is to think twice about the wisdom of a convenience-based lifestyle that revolves around heavily processed foods. It's probably unrealistic to avoid them all, but at least leaning in the direction of home-prepared whole foods could be a game changer for your health and your appearance. 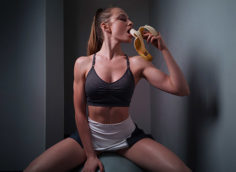