Lazy people all over the world have long awaited the invention of a pill that allows them to enjoy the benefits of diet and exercise without actually having to do any dieting or exercising.

Sure. Give them a pill like that, perfect the whole virtual sex thing, and they’ll never have to leave the house except for when the bug man comes to tent the place.

Well, we’re not there yet – on either of those scientific milestones – but there is a substance that comes closer to that no-diet/no exercise goal than practically anything else in the supplement world and it’s derived from the herb, coleus forskohlii.

The active ingredient is called forskolin and it can do a variety of things for the body that you normally can’t get without dieting and exercising. It does this primarily by stimulating production of an enzyme named adenylate cyclase, which in turn increases levels of a cellular messenger called cyclic AMP, or cAMP for short.

In turn, elevated levels of cAMP can have the following physiological effects:

Now if you were to take one of those lazy people I mentioned, put him or her on forskolin for a few weeks, and then give them a physical, he or she might well show improvement on a number of medical parameters, just by taking a couple of capsules a day.

But imagine what could happen if somebody combined exercise with forskolin. You might really have something then. 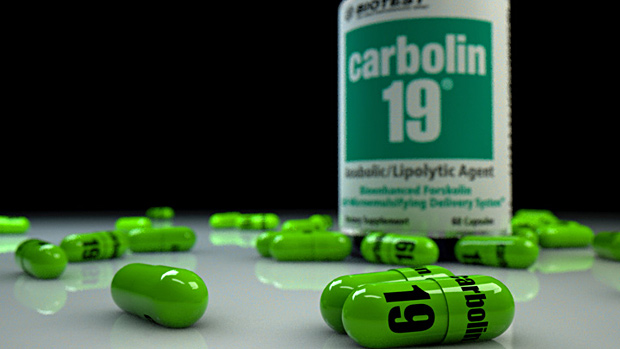 The effects I listed above aren’t just hearsay or conjecture. Much of it’s been tested and validated through various studies, the highlights of which follow:

Why Haven’t I Heard of This Stuff Before?

That’s an excellent question, Leroy. Even though forskolin’s been around for a few years, it’s never really caught on, either in the bodybuilding world or the health/life extension world. I’m pretty sure that it’s because most companies that decided to produce it didn’t bother to isolate and purify the main ingredient – forskolin.

They just collected up the dried leaves of the coleus forskohlii plant, ground them up, and put them in capsules, with or without Italian salad dressing. As lame as that approach is, it mighta/coulda worked in some situations, like maybe they lucked out and found a crop that was particularly rich in forskolin, the same way that one harvest of oranges might be richer in vitamin C than another.

Otherwise, they’d be left with a completely ineffective product, thus tainting and damaging the reputation of the product with a whole generation of users.

The only way to manufacture a potent forskolin product is by isolating the active ingredient (forskolin). Better yet, you could purify it and esterify it (bind it with a carbonate ester). The end product, forskolin 1,9 carbonate, would then be much more bioavailable and its efficacy in the body would extend from about 4 hours to about 12.

That’s exactly what Biotest did in producing Carbolin 19®.

The trouble is, these receptors eventually get desensitized to the original signal. After a while, you need a stronger and stronger dose to initiate the same response, until, ultimately, no dose is large enough to get the chemical ball rolling.

This is what docs and scientists mean when they say someone is “insulin resistant.” However, at least as far as fat burning goes, forskolin is what’s known as a “post-receptor” agent – it bypasses the beta-receptor and directly stimulates the aforementioned adenylate cyclase.

That means that the fat-burning effects of Carbolin 19® (purified and esterified forskolin), along with some of its other beneficial effects, should continue unabated. All you need to do is to take two capsules, twice per day.

Will Carbolin 19® Work for Women, Too?

Women, unfettered by testicles, obviously won’t benefit from the testosterone-enhancing capabilities of forskolin or Carbolin 19®, but they’ll still enjoy all the other benefits it conveys, like improved thyroid function, increased release of free fatty acids, and increased activation of BAT (brown adipose tissue).