It must have really smoked their white, starched shorts. Practically the whole damn country was using fish oil supplements and all the pharmaceutical companies could do was pout.

All that money, money that should have been theirs, passing into the hands of the scurrilous supplement manufacturers. Oh the indignity, oh the injustice, oh the really nice cars they could have been driving!

It must have been some go-getter in the marketing department that came to their rescue: "Why don't we just make 'prescription' fish oil, charge a ton for it, and spend some of the obscene profits to denigrate any fish oils that aren't prescription fish oil?"

Recognizing genius when they saw it, the pharmaceutical company probably shelved its plans to make prescription prune juice and started making the first of the prescription omega-3 fatty acid products, Omacor, known today as Lovaza.

Others soon followed suit. Today, doctors have their choice of prescription-grade fish oils to prescribe: Epanova. The aforementioned Lovaza. Vascepa. Omtryg. Ermahgerd. Okay, not Ermahgerd, but ermahgerd is a legitimate response to some of these wild names.

I'm probably casting a lot more shade and sarcasm on the pharmaceutical companies than necessary – at least in this case – but their omega-3 products really do deserve some scrutiny. Oh, they all work. That's a given. But the really troubling thing is that these products are mightily expensive, with the costliest topping out a little over $300 a month. Yes, a month.

Are they worth it? Are they really that much better, or really any better, than high quality over-the-counter fish oil supplements like Flameout®?

The most comprehensive paper on the merits of prescription-grade omega-3 fatty acids (Hilleman, et al. 2020) has a number of complaints about omega-3 fatty acid supplements. They allegedly have variable content and labeling inconsistencies. The products are poor quality and filled to the gills with impurities. And damn if the paper doesn't make a pretty good case.

It's not a stunner that the supplement industry has a lot of scoundrels in it, dare I say nearly as many scoundrels as the pharmaceutical industry, albeit without as many regulations to rein in their worst instincts.

That being said, many of the non-prescription fish oil supplements on the market are likely manufactured by relatively scoundrel-free companies, but the only fish oil supplement I can speak for with complete confidence is Biotest's Flameout®, as I was there at its inception and have been privy to the manufacturing standards it's produced under.

For instance, pharmaceutical grade omega-3 fatty acid products are anywhere from 80% to 96% EPA/DHA. Compare that to the 60% DHA/EPA found in Flameout®, or the average fish oil supplements that are generally about 30% EPA/DHA.

The disparity is possible because of the patented purification processes used by pharmaceutical companies. For instance, Lovaza and Omtryg contain high amounts of omega-3-acid ethyl esters, whereas Vascepa is made using icosapent ethyl, allowing it to make a product that contains only one of the two heavy-hitter omega-3 fatty acids, EPA (which they allege is distinctly better for people with high blood triglycerides).

The end result is a product with a higher percentage of EPA/DHA or EPA only, thereby allowing less "room" in a capsule for other fats or additives.

But that extra room isn't an issue, at least when it comes to Flameout®. That extra room is taken up by 1) the addition of CLA, another fatty acid that has a host of cardiac protective and body-comp beneficial effects, and 2) a few milligrams of isomerized safflower oil, which certainly isn't a problem. Even the presumably "pure" pharmaceutical grade products contain alpha tocopherol (vitamin E), gelatin, glycerol, sorbitol, and purified water.

Let's move onto "purity." First, we have to define it.

Take for instance dioxin, a common contaminant in fish oil. The World Health Organization sets the limit for dioxin at a little less than two parts per million, but the molecular distillation process employed in making Flameout® reduces the amount of dioxin to as little as 0.3 parts per million.

Now it's possible that the pharmaceutical grade products have a tiny bit less dioxin than that, but the difference is really, really, negligible and insignificant too, since it's way below the WHO limit.

So as far as potency and the possibility of contamination, Flameout® and the prescription-grade products are pretty much equal.

Okay, this is where it gets weird. As PhD-nutritionist Mike Roussell pointed out a few years ago in a T Nation article, a large study (Dyerberg, e al. 2010) compared the differences in bioavailability between fish oil supplements and prescription-grade fish oils manufactured as omega-3 ethyl esters, as in Lovaza and Omtryg:

"Researchers found the bioavailability of the omega-3 ethyl esters was -27% compared to the control fish oil (which was basically the equivalent of squeezing the EPA and DHA out of a salmon fillet). The difference wasn't statistically significant, although omega-3 esters were consistently worse performers in the different tests."

If that's the case, what the heck are the pharmaceutical companies beating their chests about?

Look, maybe it's nice to have a doctor prescribe you your fish oil capsules. I mean, having a doctor evaluate your health and blood chemistries while taking any drug or supplement is probably helpful.

That being said, I've yet to meet a physician who was well versed on the mechanisms behind omega-3 fatty acids, or for that matter, any supplement or, worse yet, any aspect of human nutrition. Except maybe scurvy. Most of them know about scurvy.

Nutrition just isn't something they spend a lot of time on in med school. It makes a sad kind of sense, though, because our whole medical system is based on reacting to disease rather than preventing it.

But I digress. If a doctor writes you a script for fish oil and you're a regular working stiff whose insurance company is willing to foot the entire bill or most of the bill, I guess I'd say to go for it.

However, if you 1) don't have insurance and want to save a ton of money, 2) don't want to trust a doc to determine your daily fatty acid dosage, and 3) like the idea that Flameout® also contains CLA – a third fatty acid that has its own healthful superpowers – you should choose Flameout®. 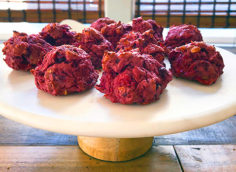 Grab a bag of cranberries and make these before this seasonal fruit disappears.
Feeding the Ideal Body, Nutrition & Supplements, Protein, Recipes, Tips
Dani Shugart December 30
As kids, we all looked at superheroes with a sense of awe – not just for their heroic acts of fending off the bad guys, but also for their seemingly flawless muscular bodies. In fact, I know of more than one guy who started working out in order to emulate their favourite superhero.
Feeding the Ideal Body, Nutrition & Supplements
Dave Barr November 22 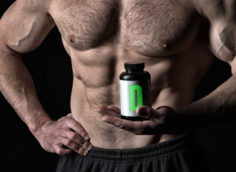 Take all the vitamin D you want, but it's not going to do a damn thing unless you have sufficient levels of this hard-to-get mineral.
Nutrition & Supplements, Super Health
TC Luoma August 11