Sorry I Almost Killed You That One Time

I really blew it when I first began offering diet advice a couple of decades ago. Mainly, I made too many assumptions about the people I was trying to help.

Another example: I once talked to a nice lady for 30 minutes about carbs, how they affect the body, and why she'd be wise to lower her intake a bit. After half an hour, she said, "So, um, a carb is like... meat?"

See, we sometimes forget how to talk to "regular" people. Not competitive bodybuilders, not people who love to dig into the latest studies, and not people who read every food label as closely as the directions on a home pregnancy kit. For most people, simple diets are the way to go. But they can be tricky.

Some of the most popular diet plans throughout history have been what I call "one-rule diets." They're straightforward, easy to grasp, and usually pretty dumb.

For example, there was the "eat nothing white" diet. It was created to help get people off the sugar and flour, which is a good idea. But it was too simple. Egg whites, chicken breasts, onions, cauliflower, and most fish are white. Twinkies aren't. They must be okay.

That same diet strategy also metastasized into silly beliefs, like how brown "wheat bread" is supposed to be healthier than white. Of course, most wheat bread is just white bread with brown dye added... and white bread IS wheat bread anyway.

"Don't eat anything with fat in it!" was popular too, and that lead to things like fat-free, high-sugar ice cream and a sweet bump in type-2 diabetes.

But the idea of a one-rule diet is still appealing. Today, when I help someone with their diet, I often start there to avoid overwhelming them.

Even if you're an experienced lifter who knows a thing or two about nutrition, a good one-rule diet can keep things simple. Here are a few good ones. A bit oversimplified? Sure. But they also tend to work every damn time.

1. Don't Eat or Drink Anything With Added Sugar

Of all the things people freak out about – too many carbs, too much fat, the wrong kinds of carbs and fats, organic vs. nonorganic etc. – sugar should be the most obvious monkey wrench you keep out of your machinery.

Most fit people have already gotten rid of the sugary kid cereals and have learned to love their coffee black, but many of those same people make up for all the sugar they avoid during the week on weekends. Stop saying you "rarely" eat sugar just because you skip it all week and only have a doughnut-orgy on Saturday. You eat lots of sugar, dummy.

Also, organic sugar will make you organically fat. Take the sugar-laden foods out of Whole Foods and the store would be half the size.

Now, don't get weird here. DO eat your fruits, berries, sweeter veggies, and other foods that just happen to contain some natural sugars. You'll be fine. No one ever got fat from eating too many carrots despite the 3 grams of sugar each one contains.

Just focus on ADDED sugars and read those food labels all the way down. Do you see sugar on there, or one of the 61 tricky names for sugar like sucrose, high-fructose corn syrup, barley malt, dextrose, maltose, rice syrup, etc.? Then don't eat it. Period.

Lay off the honey too, paleo people. Your caveman ancestor didn't eat the amount of honey you add to one batch of your "paleo cookies" in his entire lifetime.

Most carbs aren't evil. Rice, oats, and potatoes are pure muscle fuel. But most overweight people ARE usually over-consuming carbs... and not from rice, oatmeal, and potatoes.

Years ago, Dr. Mike Roussell and I co-wrote a one-rule diet called The 100 Gram Carb Cure. Eat 100 grams of carbs per day. That's about it. This creates an autoregulating effect, so everything else pretty much falls into place.

For most people, this easy-to-follow plan naturally causes them to lower their daily calories and "spend" their carb allotment more wisely. With carbs limited, but not too limited, their protein intake naturally increases, which keeps them satiated.

Lifters should spend their carbs around their workouts, ideally by using specially formulated workout nutrition drinks designed to boost muscle growth, fuel hard training, and stimulate recovery. The rest of the day you'll get a stray carb here and there until you reach about 100 grams. Then, no more carbs.

Now, this one-rule diet does require some carb counting, but it's pretty painless compared to those count-everything plans.

Intermittent fasting is all the rage again. It's very popular with people who'll be even fatter in the future and diet coaches who've run out of ideas.

Two problems here. First, the studies done so far on this and other types of fasting show that while weight can be lost, abdominal fat is often gained in the long run. Developing insulin resistance, fertilizing the seed of an eating disorder, and triggering a "gene expression profile favoring lipid (fat) deposition" as the science nerds say, could be the culprits.

Second, hundreds of studies show that doing the opposite – always eating breakfast but cutting off eating about 3 hours before bed – has a host of benefits, including fat loss. You'll be "fasting" for 3 hours plus the time you're asleep, plus the time it takes you to get moving in the morning and make breakfast. Call it "The 11.5 Hour Fast" if that makes you feel special.

Frontloading calories – eating more earlier in the day and less in the evening – has been shown to work better than backloading calories even if total calories are kept the same. But realistically, overeating and snacking at night are curbed, and that's probably the main benefit.

As a bonus, eating breakfast, particularly a high protein breakfast, also normalizes our neurotransmitters that regulate food intake, so not eating 3 hours before bed is fairly easy once you break the behavioral habits.

But you don't like eating breakfast? That's usually because you overeat at night and you've got your hormones all mussed up, primarily ghrelin and leptin which affect the brain chemicals NPY, AGRP, and POMC... but let's keep this simple.

In short, a big protein-heavy breakfast is less likely to be converted and stored as body fat, while big nighttime meals are more easily stored as fat. As one researcher noted: "Energy intake timing may have substantial effect on metabolism, independent of total energy intake and quality of diet."

No, this isn't necessarily about gluten. It seems that this particular grain is troublesome for several things besides its gluten content.

The anti-wheat doctors and paleo advocates like to quote studies showing that wheat polypeptides bind to the brain's morphine receptor, the same receptor to which opiate drugs bind, meaning that you get cravings, overeat, and disrupt your natural appetite-signaling and satiation mechanisms.

Some of this research is debatable, but the health benefits of wheat are largely nonexistent, you don't need it, and it's probably doing you more harm than good. Maybe it's more related to FODMAPs, or maybe it's just that most wheat-containing foods are also full of the same stuff that can lead to something called toxic hunger.

Doesn't matter. The one-rule diet, "don't eat wheat," works for just about everyone.

Adopting a wheat-free diet tends to get rid of most of the stuff that made you chubby to begin with: pastries, pancakes, breakfast cereals, breads, pastas, etc. If your body fat is stubborn, or you feel out of control around food, give it a shot. It can take anywhere from 5 to 28 days to drop the "wheat addiction" the experts say.

Now, of course this or any of the above one-rule diets won't work if you sit around eating sticks of butter rolled in peanuts. I'd tell you not to do that, but instead I'll just assume your IQ is above 70.

Choose one of the plans above and get to work. Too simple and easy? Combine a couple of them, like "no-wheat" and "don't eat before bed." You WILL get leaner. 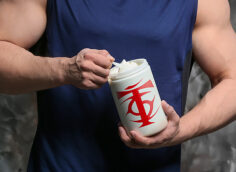 Everything you need to know about how to get the most out of collagen supplements, plus a couple of new tricks.
TC Luoma July 4

Sooner or later, cancer will stick its ugly face into your life or the life of someone you care about. The time to start fighting is now. Here's how.
C3G, Curcumin, Diet Strategy, Nutrition & Supplements, Super Health, Superfood
TC Luoma May 22
I'm going to spare you nutrition intricacies like the latest information on Glut-4 transporter translocation and just give you the Cliff's Notes–or Clay's Notes–on how to piece together meals and eating plans that'll help you achieve your physique and/or strength goals.
Feeding the Ideal Body, Nutrition & Supplements
Clay Hyght, DC March 26