1. Skipping Breakfast is NOT Intermittent Fasting

The original intermittent fasting approach was based on human cycles:

Simple. Basically, it means not eating during the day when you're active and then eating in the evening when you have time to recover. You used food (or the lack of food) to help put yourself in the physiological/neurological state where you needed to be.

Nowadays, many people do an easy (but less logical) version of intermittent fasting: they count the time they're sleeping as fasting. For example, they stop eating at 8 PM and start eating again at noon the next day – a 16 hour "fast."

This is simply "skipping breakfast," which, by the look of most people doing it, doesn't really work. Here's why:

If you want to do intermittent fasting, go for it! But at least go for the real thing. Don't eat from sunrise to sundown (or close to it) and feast at day's end to get into parasympathetic mode.

2. Ketosis is a Last-Ditch Survival Mechanism, Not a Lifestyle

That's something people fail to understand. It means that the purpose of ketosis is to safeguard against starvation when energy intake is insufficient.

The body really doesn't want to be in ketosis. Think about it. If ketosis were a favored energy system, it would be the primary system we use all the time. Rather, glycolysis and fat oxidation are the primary energy systems. Ketosis is only there to help you survive when you can't fuel your body properly for a brief period.

Ketosis is like the spare tire of your car. It can "work," but it's not optimal for long-term use.

This is evidenced by several studies establishing that work capacity (especially in intense activities) goes down when using a ketogenic diet.

As for building muscle, well, you can't build muscle optimally while running on a last-ditch survival mechanism. This is supported by a review of the literature. The gist? While a keto diet can work well for fat loss, it's suboptimal for muscle and strength gains. (2)

Now, before you get your panties twisted in a bunch... Wait, can we still say that these days? How about this: Before getting your unisex underwear twisted in a bunch, make sure your reading comprehension is up to par: keto is not OPTIMAL for muscle growth and strength gains.

I'm not saying it's completely ineffective or that you can't build muscle or strength on a keto diet. It's just suboptimal. There's a difference between suboptimal and "not effective."

3. Ketosis and Using Fat for Fuel Are Not the Same Thing

Remember, ketosis is a safety mechanism triggered to provide fuel for your brain in case of a glucose shortage. Yes, the body uses fatty acids to produce ketones. So, technically, ketosis does use fat for fuel. But not all of the fat usage for fuel is done through ketosis.

Most tissues requiring energy can use fat oxidation or glycolysis for fuel. The main exception is the brain. The brain can only use glucose or ketones for fuel, not fatty acids directly.

As long as the brain has enough glucose to work properly, there's no real need to resort to ketosis, which is more complex than using glucose. Glucose can come from the carbs you eat, but it can also be produced by breaking down protein into amino acids. The liver turns some of them into glucose.

That's why if your protein intake is really high, even if your carbs are close to zero, you might not get into ketosis: you have enough amino acids to produce glucose to fuel the brain.

The body will start producing ketone bodies significantly when carbs and protein intake are insufficient to produce the glucose required for the brain to work. That's why it's a survival mechanism. It happens when you don't ingest the nutrients required to fuel the brain. And having a functional brain is kinda important.

A lot of people claiming to be doing a "keto diet" might not actually be doing a keto diet. True keto recommendations normally include consuming at least 60-70% of your calories from fat.

Ketosis is NOT being "fat-adapted" (although it's a catchy concept). You can use fat for fuel just fine. What they call "fat-adapted" is simply your body producing enough ketones to fully fuel the brain – not having to break down muscle tissue to make some glucose to make up for the insufficient ketones.

In a nutshell, you can function on a backup generator, but it's not optimal. 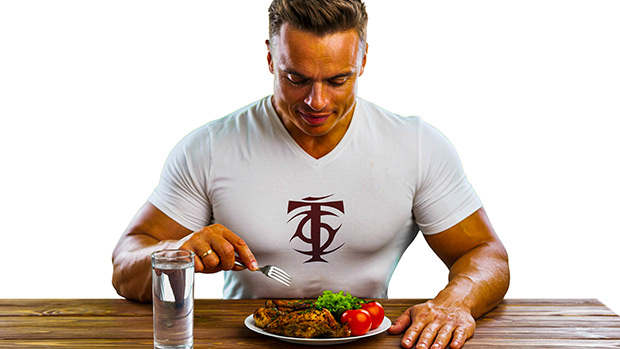 I'm not going to make any friends here, but facts are facts. Keto and other low-carb diet approaches lead to higher cortisol levels, especially in response to training.

One study found a large cortisol increase in the first two days of low-carb eating. It became "less bad" after two weeks, but it was still higher than the higher-carb diet. (3)

Why? Well, the two key functions of cortisol are:

While number one is more dependent on caloric intake, number two is heavily influenced by carb intake. A diet leading to low blood glucose levels (any low-carb plan) will lead to higher cortisol and glucagon to mobilize stored glucose (as glycogen), or to break down muscle tissue into amino acids to have the liver convert them to glucose.

Why does it matter?

Not to mention, a low-carb diet leads to a lower work capacity during intense workouts. And, of course, keto dieting is inferior for muscle growth. I suspect that the higher cortisol is part of the reason, but not the only one.

"Yeah, but keto works great for me, bro!"

I'm not saying it can't work. And it's certainly better than how many people are eating. But don't let personal bias, emotional bias, or recency bias cloud your objectivity!

5. It's Not Just Calories-In, Calories-Out

Sure, eating a caloric deficit will lead to weight loss, and – provided your protein intake is high and you train hard – most of that will be fat loss. But that's not all there is to it.

I understand where the calories-in vs. calories-out approach comes from. It was to show that you didn't need a special diet (keto, vegan, intermittent fasting, paleo, photosynthesis, etc.) to lose fat. I get that.

It also provided relief from overly strict diets by allowing people to eat a variety of foods. I'm all for that. Rigidity can lead to lower adherence.

But this has led many people to claim that food choices don't matter as long as you're in a calorie deficit. That might have some truth to it when it comes to fat loss, but fat loss isn't the only thing affected by what you put into your mouth.

Blood lipids, blood pressure, blood sugar, low-grade systemic inflammation, gut health, etc., are all things that can have a significant impact on your health. And they're all impacted by nutrition. Not to mention, food choices can affect neurotransmitter levels, which will affect your mood, well-being, resiliency, and sleep.

Eating should never be just about losing (or gaining) weight. Health and well-being should actually come first. Remember, losing fat is NOT the sole purpose of your nutrition plan!

Here's one argument we often hear to support using a ketogenic or low-carb diet:

"You have essential fatty acids and essential amino acids, but there are no essential carbohydrates!"

This is a classic case of something not meaning what keto proponents think it means. In their minds, it means that carbs are not needed in a diet; they're an inferior class of nutrient.

That's NOT what "non-essential" means in nutritional science:

As for carbs (glucose), the body can make them by converting some amino acids into glucose – gluconeogenesis. The body can also convert lactate (lactic acid) into glucose.

That's why they're called "non-essential." It has nothing to do with how important they are.

"Yeah, but I'll just let my body produce its own glucose from protein! No need to eat those nasty carbs; I'll just make up what I need!"

Sure, good luck with that.

The body converts amino acids to glucose at a 30% efficiency rate (or less). To make it simple, to make up 160 grams of glucose – the daily amount necessary for the proper function of organs, not counting physical activity – you'd need to convert 530 grams of protein, or more, into glucose.

The point? Yes, you can produce glucose from other substances, and that makes it non-essential. But it doesn't mean that carbs aren't necessary, especially if we're talking about a hard-training individual who wants to build muscle or perform at a high level.

This also doesn't account for the fact that carbs have physiological effects outside of simply providing energy: physiological effects (increases in IGF-1, mTOR activation, reduction in cortisol, etc.) that will not be present to a significant extent by converting other substances into carbs.

In short, carbs being "non-essential" does not make them a less important macronutrient.