If you're like me, you sometimes struggle to find convenient, palatable ways to work additional servings of fruit or vegetables into your diet. Well, get ready to make that surprised Scarlett Johansson meme face because I found a real easy way to add more plant matter to your diet without you even tasting it.

It's canned pumpkin. Yeah, the stuff people buy every Thanksgiving but ignore the rest of the year.

I keep several cans on hand at all times. I just open one and mix a generous dollop into my oatmeal, protein drink, or yogurt. I might also add some to any soup I'm making, or my mashed potatoes. I add it to pancake mix, even pasta sauce. And I barely know it's there.

Once I take what I need from the can, I snap a plastic can lid on top of it and toss it in the fridge. It stays fresh for about a week but I almost always use up the contents before then.

But that's not all. Get ready to go from a Scarlett Johansson surprised face to a Scarlett Johansson o-face (okay, maybe it's not that exciting) because this same, easy to incorporate, bland, almost tasteless fruit/vegetable (botanists regard it as a fruit but everyone else calls it a vegetable) has also been shown to both increase endurance and prevent muscle protein breakdown.

The meat of the pumpkin is of course orange, which is nature's way of telling us dumb animals that it's full of carotenoids like beta-carotene, cryptoxanthin, lutein, and zeaxanthin, stuff that's all complicit in improving human health in general.

So along with the increased health benefits of all that carotenoid-rich pumpkin meat, you get improved insulin sensitivity, the possibility of increased endurance and strength, and reduced exercise-induced muscle-protein breakdown.

Based on what I just told you about pumpkin, it's clear that it's a fruit/vegetable that's perfectly suited for the fitness/weightlifting/bodybuilding/athlete modern-day lifestyle, especially in its canned form. (Get a 12-pack delivered here.)

But if you're not yet convinced, pumpkin has another superpower you should know about: It's the Mickey Mantle of bowel movements in that it's the consummate bowel switch-hitter.

Note: Here's another tasty way to work pumpkin into your diet:

Whisk everything together and plop it into your waffle iron. Done!

A new study shows why we may want to have more meals earlier in the day and cut them off long before bed. Here's the new science.
Diet Strategy, Losing Fat, Nutrition & Supplements, Tips
Chris Shugart June 16

The high-fructose corn syrup people are telling you their product is the same as sugar, but they're lying mo-fo's.
Diet Strategy, Feeding the Ideal Body, Nutrition & Supplements
Lonnie Lowery, PhD March 26 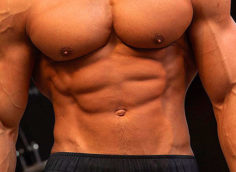