You're probably not trying to get peeled like a stage-ready bodybuilder. That's fine. But if you want to get relatively lean (something beyond seeing your top two abs), and you've had trouble doing it, then your dietary compliance probably sucks. You just can't stick with the plan.

But why? Let's get into that, then talk about five proven ways to stay compliant.

"My diet is better than your diet!" You hear that a lot these days... and anyone who says it is probably wrong.

Throughout the 1990s, bodybuilders used moderate protein, high carb, low fat diets to get ripped. But somewhere into the 2000s there was a shift where carbs suddenly became the enemy and were responsible for everything from cancer to Nickleback. Lately it's become sugar. Just eliminate sugar and eat more fat and your jiggly tissue will fall off.

None of that's accurate, of course. But it hasn't kept the masses from getting overzealous about high-fat, low-carb, n=1 anecdotes. Incidentally, they ignore mountains of research and discredit the anecdotes of those who didn't use that approach.

Here's the truth: For the person who's lifting weights and trying to lose fat, all diets that equate for caloric and protein intake work basically the same. When it comes to fat loss, no one type of diet is superior to any other when those factors – eating plenty of protein and being in a caloric deficit – are considered.

What generally allows a person to get results from ANY diet is their degree of compliance. Ultimately, that ends up being the secret of why it worked. It's not because removing carbs or reducing fat did something magical. Each diet just reduced caloric intake.

Those who claim that their diet is superior basically just found a style of eating that was easier for them to adhere to. Because their diet was a nice fit for them, they were able to stay in a caloric deficit for enough time to lose fat. Period.

The 5 Steps to Dietary Compliance

All of us have trigger foods. These are foods that send us spiraling right into the seventh circle of gluttony hell. Those triggers vary greatly from person to person.

This is one area where I'd define foods as being "good" or "bad" based on your reaction to eating them. Contextually, a bad food is one that meets the seventh circle criteria when you're trying to get lean.

It's up to you to be aware of what foods cause you to eat more even after you've had your fill. For me, it's basically anything that doesn't fall under the bro-diet umbrella. So basically anything that's not eggs, oatmeal, rice, chicken, etc. I don't just eat a slice of pizza; I eat four pizzas. I don't just eat one doughnut; I clean out the bakery.

Some people CAN just have two Oreos. They're called sociopaths and they feel nothing, have no emotions, and lack empathy.

It's up to you to identify your trigger foods and eliminate them during the time that you're trying to have a high degree of compliance. No, this isn't something you have to do forever. But if you're wanting to shed fat and you don't want to screw it up, then just eliminate the foods that cause those problems.

Now, there's one obstacle to look out for: the scarcity effect. It's when we end up wanting something because of the perceived lack of availability. The less access we have to something, the more we tend to crave it. This can be a lethal combination when it comes to trigger foods.

The solution to replace those trigger foods with foods that are "close enough." If you love pizza, try a thin crust or cauliflower option using toppings that are higher in protein and lower in calories: grilled chicken instead of sausage, extra veggies, half the cheese, etc.

If you love cookies and brownies, try the low fat and/or low carb recipes for those foods. If it's easier for you to just abstain all together, then do that. But figure out what you need to do to stop short-circuiting the fat loss process by giving in to your trigger foods.

For decades there was this belief that eating more often raised our metabolic rate causing us to lose more fat. You know, eat six small meals a day instead of three big ones. We know now this isn't actually true and eating frequency has no major effect on metabolic rate.

From a muscle retention standpoint, it's probably a good idea to have some protein coming in every four hours or so to stay highly anabolic and to keep muscle protein synthesis elevated. That usually means about four meals a day. Anecdotally, I've found this to work well for people who don't like to eat as often as others do.

Some people do much better sticking to their diets and losing fat if they know it's only 2-3 more hours until their next meal. This is one reason why a lot of bodybuilders use the approach. For a guy that's been pounding food every 2-3 hours in the off season to grow, creating a high degree of compliance during super hypocaloric conditions is easier if they adhere to that same schedule. As noted, they're starving and can literally only focus on making it from one meal to the next.

Some people like bigger meals and want to feel more full from meal to meal. They're the ones who do better on three or even sometimes two meals a day.

Most people will do very well on the following approach, especially when it comes to protein intake. Take a look:

This frequency tends to be doable for most. And if you actually sit down and figure out the exact timing throughout the day, it can make a caloric deficit a little easier. No matter how hungry you get you'll know that it's not too long until your next meal.

Satiety – the feeling of being full – helps with compliance, and it's one reason a lot of people have found the keto diet to work well for them. There tends to be a high degree of satiety for those who actually get into ketosis due to the release of glucagon and beta-hydroxybutyrate. Both of these suppress the appetite hormone, ghrelin.

But not everyone wants to do keto. For those who don't, it's important to fill your plate with foods that create a high degree of satiety from meal to meal.

Protein tends to increase satiety, especially animal proteins. Whey protein goes through the digestive tract and into the bloodstream very quickly, which makes it ideal in the post-training state but doesn't do quite as good of a job as animal proteins or casein in terms of keeping you full.

This is why you should be chowing down on chicken, fish, beef, eggs, and turkey as staples in most of your meals. But there's plenty of carbs, like boiled potatoes and oatmeal, that rank high on the satiety index, along with fruit like bananas, apples, and oranges.

Wild, right? Whole foods we get from nature fill us up the most and don't send us spiraling into the gates of gluttony. Who would've known?

If you're getting most of your food from minimally processed sources, you'll likely control your food intake naturally. If you've followed step one and are abstaining from trigger foods, then you're well on your way to getting lean.

If you've been dieting without seeing fat loss, you're likely underestimating how many calories you're consuming. That means calories coming in from both food and drink, mind you. My girlfriend worked with a client that couldn't figure out for the life of her why she was so heavy when all she ate each day was a few eggs and some chicken at night.

Turns out, she was going through a case of Pepsi a day and a metric ass-load of heavy cream in her coffee. Never mind the six pack of beer she was putting down each night. I guess she thought liquid calories don't count?

I had a similar experience with a client who wasn't losing fat, yet swore she was following her diet to the letter. But she was forgetting all the bites she was taking of the food she prepared for her kids. Once she stopped doing that, she started losing fat.

All calories count. How can you actually know what your caloric count is each day if you've literally spent no time tracking?

Keeping a food dairy is one area that can increase compliance because, hey, you're going to have to write down that you polished off the leftover doughnuts in the break room and had three glasses of wine to close out the evening.

You can't improve on something that you're not aware of. If you track your food and drink intake, you'll immediately know what needs to be improved.

A lot of people will quit a diet simply because it's too different than how they're accustomed to eating. This dramatic change makes it too difficult to be sustainable.

This isn't everyone, of course. Some people can go right from eating like an asshole into a full-bore keto and not skip a beat. But not everyone.

One way to create sustainability is to make simple, one-thing-at-a-time changes that allow for new habits to be created. If you've been eating a dozen peanut butter and jelly sandwiches each day, then the next logical step (to create a calorie deficit) would be to eat half as much, or to replace them with something similar, but lower calorie. NOT go right into chicken, broccoli, egg whites, and oatmeal. It's too big of a change from what became habitual.

People usually fail with huge transitional approaches because of habits. Habits die hard. To form new ones, make small changes you can sustain.

Replace your regular Coke with Diet Coke. Eliminate one highly processed food that's been a constant in your life, or reduce the number of times a week you're allowing yourself to have it, until you can eliminate it altogether.

Remember, the next six months are going to go by anyway. Instead of trying to fix everything all at once, try to fix one thing at a time until it's sustainable. Then fix something else that contributes to better dietary habits.

By the time the six months have passed, you'll have created half a dozen new habits that all contribute to better body composition. Now you're working with sustainability, which will lead to compliance... and that should always be the goal. 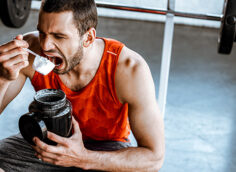 Here are two examples of how grams-of-protein per serving can be manipulated to make a product or food seem magical.
TC Luoma June 3
Last week, John Berardi, Lonnie Lowery, Cy Willson, and that annoying Jared kid from the TV commercials discussed different aspects of carbohydrate metabolism. When last we left them, they were about to start explaining the differences between individual types of carbohydrates.
Feeding the Ideal Body, Nutrition & Supplements
John Berardi, PhD October 4

The most important part of getting lean and building muscle is getting your body to use the hormone insulin more efficiently. Here’s how to do it.
Diet Strategy, Feeding the Ideal Body, Nutrition & Supplements
Nate Miyaki April 15