Here are the most common questions I get from new lifters. They don't always like the answers, but they certainly like the results they get if they follow this no-BS training and nutrition advice.

Every bro that hits the gym asks this question, but what they really mean is, "How much protein should I eat to maximize muscle gain?" What lifters want is to stimulate muscle protein synthesis. In a post-training state, muscle protein synthesis is elevated and the cells are primed for the uptake of amino acids. At this point the stage will be set for gains.

What science has shown us is that excess calories from protein don't easily go towards fat accumulation, but they also don't increase the rate of muscle growth. There's no way to accelerate muscle gains faster than what your genetics will allow unless you put your body in an enhanced anabolic state with steroid use.

You can't force-feed muscle growth via excess protein. If your weight training sessions are causing an adaptation response, and you're in a calorie surplus overall (somewhere between bodyweight x 16-20 calories), and your protein intake is adequate, then you're going to be growing as fast as you can grow.

There are no shortcuts here, but there are some optimal ways to use protein intake to maximize what mom and pop gave you:

What does that look like in a day? Three squares of approximately 30-40 grams of protein at each meal. A post-training shake of 40 grams of protein. Then 20-40 grams of casein before you hit the sack. If you're eating in a calorie surplus, and that surplus contains carbs – as it should – then there will be a little protein that comes along with those carb sources. Those count too.

Getting enough protein often isn't the issue for most guys who aren't growing. It's often a lack of overall calories and training intensity that's holding them back. Once all of those things are in place... boom. Gainz.

I still see guys who've been lifting more than a decade do traditional bulking and cutting phases, and it's perplexing. Add extra layers of blubber for a season, and sure, you'll end up with a little extra muscle. But even for advanced guys, the ratio of muscle gain to fat gain is way out of whack, and it's not worth it.

Then they spend the next few months in their "cutting phase" peeling off all of that fat to reveal what basically looks like the same physique they had before their bulking phase.

So what should a noob do with the limited time they have in weight training utopia? First, consider your age.

If you're over 40, then leave the "bulk and cut" motto to the high schoolers trying to make varsity. Hormones in your 40's are not the same as hormones in your teens or 20's. They're going to be less responsive to training and nutrition than what someone younger will experience.

There's good news though. If you're a 40-plus noob, you're still going to get the benefit of being able to lose fat while building muscle during the first few months. But unlike the bulk and cut lifters, it's a bit more important that you use this time as the launching pad for something that's sustainable and contributes to your overall health and longevity.

What if you want to get massive? Your plan should be devised to enhance what's left of your life and increase the quality of it:

If you're a younger noob, and you're overweight or obese and you feel lost nutritionally, stop reading bodybuilder articles on how to eat. Going straight from Captain Crunch and Pop Tarts to chicken and broccoli six times a day isn't a one step transition. But there actually is a formula that works for just about everyone. Try this:

Drink a protein shake 15 minutes before a meal. Eat your protein in the meal first. Eat your veggies and/or carbs last. Do this four times a day. And eliminate high-calorie, low-nutrition snacks like candy bars, pop, pastries, cookies, chips, etc.

Don't worry about counting calories and macros and all that jazz at first. Just do these five things first. The shake 15 minutes before the meal tends to kick in because it satiates you by the time you're ready to fork it up. You'll end up eating fewer total calories as a result.

For the young noob that's on the other end of the spectrum and looks like a less muscular version of Tom Hanks at the end of Castaway, have three meals a day with 30-40 grams of protein and 50 grams of carbs. Add a tablespoon of olive oil to those three meals. Between meals have a peanut butter and jelly sandwich... or five. However many it takes to see the scale move by a pound a week.

No noob has the amount of muscle needed to get "all ripped up." And don't bulk if you're already fat.

Train yourself to push your fork away from your mouth. Neither weight training nor cardio do a whole lot to create an energy deficit compared to not eating that piece of salted caramel cheesecake from Cheesecake Factory:

Your neighbor lady who lost 57 pound using Weight Watchers never hit the gym, never stepped on a treadmill, and never did a squat. How's that possible? She created an energy deficit by eating fewer total calories each day than she had been. She had a point system. Salted caramel cheesecake from cheesecake factory is 25 points. Three ounces of chicken breast is 3 points. I hope you get the idea here.

When it comes to fat loss, your nutritional habits have a bigger impact than training.

In fact, weight training or metabolic conditioning routines that create massive energy deficits often stimulate the appetite so much that they cause you believe that you somehow "earned" the salted caramel cheesecake.

Stop looking for fat loss routines. Eat adequate protein. Manipulate your fat and/or carb intake downwards to achieve an energy deficit. Weight train to get thick, solid, and tight. Do cardio for heart health and use it as a supplement for your energy deficit.

Go to Wal-Greens. They carry an endless supply of Vagisil that you can slather all over your body.

I suggest you cultivate your life in a way that helps you to exude confidence and charisma. Feeling good about how you look can help that, but it's not a be-all end-all solution. There's an awful lot of insecure people walking around with million dollar bodies. And that's often because people with deep-seated insecurities believe fixing how they look will also fix the internal problems they struggle with each day.

Learn how to dress like a grown man instead of wearing 5XL T-shirts out to the club when you should wear a medium. Don't wear a medium when you're a true 5XL guy.

Have a sense of ambition and a vision for what you want to accomplish professionally and personally. Learn to smile. Your male resting bitch face is cool in the gym, but she thinks you're about to club her over the head and throw her into your trunk.

Plenty of men have found their way into a gym because they believed the acquisition of more muscle would help them to secure a beautiful female. Ladies like muscles, right? Well, yes and no.

If you take some time to scour the internet and look at studies done on the physical characteristics that women are most attracted to, you might be shocked to find out that the majority of women aren't getting all hot and bothered by overly-muscled physiques.

Even Frank Zane type physiques take last in a line up of far less muscled physiques when it comes to sex appeal. If your argument is that overly muscled guys are getting all the action at fitness expos I'd advise you to get out of the house once in a while. Grasp the very difficult idea that there are women existing outside of fitness. I know, it's crazy, but it's true. If you drop the name Jay Cutler around a female, she's more likely think you're talking about the quarterback, not the bodybuilder.

There's good news, however. Achieving a body that's highly desirable to most women doesn't require an insane amount of muscle mass, and can be achieved in short order, if you prioritize the right areas, namely: shoulders, lat width, and abs – especially the Adonis belt. Basically, improving your V-taper.

What can you do? You know revealing your abs comes with fat loss. So get your diet in order. Though she isn't going to see your abs until you take your clothes off. So, how should you train to be in a position where she desires your clothes off?

Choose one of the hundreds of workout plans you can find for free on this website or learn how to write your own.

Then combine it with the following...

If you're capable of doing 5 chin-ups right out of the gate, do 50 a day. You can do more if you like. Do these in addition to whatever you're doing for back work in the gym.

Get some light dumbbells for your home. Ten or 15 pounds will work, most likely. Do 100 lateral raises every day. Do them while watching a TV show. Try them between the sets of chins. Just get 100 in. Do this in addition to what you're doing for shoulders in the gym.

All of this extra work will help to create that little bit of extra energy deficit as well. So if your diet is in order, and you're weight training three times a week and sprinkling in a dash of cardio a few times a week, you'll find that this combo helps to get you sculpted quickly.

These cookies won't make you fat, they're healthy, and they'll fuel your workouts. Get the recipe.
Feeding the Ideal Body, Nutrition & Supplements, Tips
Dani Shugart November 27 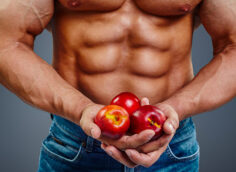 Most bodybuilders and athletes eat the same foods all the time. Here are the pros and cons of diet diversity and a possible compromise.
Health & Longevity, Nutrition & Supplements
TC Luoma June 14 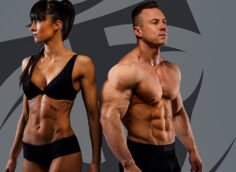