It’s Not About the Diet

Thousands of diet and exercise programs have been written in the past decades, but are all those programs really necessary? Shouldn’t a handful of basic nutrition and training principles work for the vast majority of the population?

There’s a basic principle that isn’t talked about enough in the diet and muscle-building industry and that is:

Seriously. Don’t gloss over that point. Diet and exercise are merely tools that work only as well as your body will allow. This is critical.

In other words, if your guts aren’t working properly, nothing will. 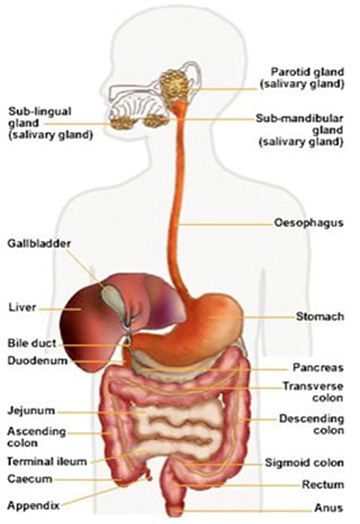 The digestive process doesn’t begin in your stomach, or even your mouth. It begins in your brain. When you think of, see, or smell food, the salivation that occurs is evidence that digestion starts as a cerebral process.

But let’s talk about the tangible stuff. Here’s a breakdown of the digestive tract, what can go wrong, how it can impact your efforts to get ripped for a bodybuilding competition or just shredded for the beach, and what to do about it:

The primary role of the stomach in the digestive process is to secrete hydrochloric acid, or HCl. HCl doesn’t digest food on its own, but rather creates an environment for digestion to begin.

Specifically without adequate hydrochloric acid, pancreatic enzymes won’t be optimally secreted, nor will the gall bladder store adequate amounts of bile to assist in emulsification of fats for digestion.

The most effective test is the Urea Breath Test, which used to be over $1,000 to run, but is now a very affordable $100. It’s a pretty nasty infection, even contributing to cardiovascular disease, but is fairly easily eradicated. If you test positive for H.Pylori, eradicating it should be your first priority.

It’s not recommended you supplement with HCl without the assistance of a qualified medical professional, despite the ease with which you’ll find suggestions online. If you cannot find a qualified practitioner to assist you, you may try supplementing with betain HCl, starting with one capsule or tablet with every meal, and increasing until you feel a “warming” sensation in your stomach, and then backing off one tablet, which will be your maintenance dose for every meal for a period of time.

Ideally you’ll be able to back off one tablet at a time until no further HCl supplementation is needed. People who are taking hydrochloric acid shouldn’t use ulcer-inducing drugs such as aspirin (or other non-steroidal anti-inflammatory drugs) or alcohol.

Today one of the most effective tests available is the GI Effects test through MetaMetrix laboratories. This lab has revolutionized stool testing – yes, that’s poop testing – by looking for the DNA of a given microbe, rather than the microbe itself.

While two types of GI Effects testing is offered, the microbial panel is all you really need. If HCl and enzyme production is adequate, the more expensive and elaborate test isn’t necessary.

The primary malfunction of the large intestine is dysbiosis, or an imbalance of “good” to “bad” bacteria. When this happens, a number of physiological defects can occur, hampering our ability to lose fat.

When addressing gut function, it’s always important to start at the top. Making sure HCl production is adequate, and ruling out an H.pylori infection should come first. Then take a look at every stop on the way down to make sure things are functioning optimally and take the appropriate therapeutic measures as necessary.

Diet and exercise are merely tools. Effective tools to be sure, but they only work to the degree that your physiology allows them to. The gastrointestinal tract is one such system that if not working properly will make fat loss efforts more difficult, if not impossible in some cases. Fix them and – if everything else is in order – you’ll get lean fast!