The general population constantly cycles through nutrition trends. Twenty-five years ago, dieting was simply about lowering calories, mainly through a lower fat intake. Everyone's mom was familiar with Weight Watchers. Bodybuilders would drop pretty much all dietary fat from their diets and reduce calories to get lean.

Then, largely because of Charles Poliquin, it became all about hormones. And suddenly, calories didn't matter. In fact, many said that calories didn't exist. That was their big argument. It was all about making sure insulin stayed as low as possible, usually by dramatically decreasing simple carbs and increasing fiber.

Then we shifted to the intermittent fasting and keto era, which was largely a continuation of the "hormonal theory" of dieting. Sure, these nutritional concepts had some value, but we saw a lot of the drawbacks when they were taken to extremes.

And now, even though those former strategies are still quite popular, we're seeing a reversal back to the former notion of lowering calories. Is that a good or a bad thing?

Today, it goes by a few different names: flexible dieting, IIFYM (if it fits your macros), and CICO (calories in, calories out). Regardless of what you call it, the goal of eating fewer calories than you expend is a prevalent nutritional approach.

It's popular in large part because of its highly-palatable message: eat whatever you want as long as it falls within your calculated caloric and macronutrient allowance. However, proponents often say that you need to keep your processed "fun" foods limited to 20% of your diet while getting the other 80% from unprocessed, natural foods.

But really, who does that? It might start that way, but it'll end up being closer to 50-70% processed foods for most average people.

The theory is, for losing and gaining weight, the dominant factor is solely the difference between the calories you ingest and your caloric expenditure. In fact, the most extreme proponents will claim that caloric balance is the only thing that matters. And in most cases, when it strictly comes down to weight gain or loss, it's somewhat true.

But this assumes that the main objective of a nutrition plan is body weight. And that's the problem.

The most important objective of a nutrition plan is to keep you alive, optimally healthy, and feeling good. But survival isn't an issue in our world of plenitude – where even the most palatable foods are abundant and cheap. So, being optimally healthy is the key function of nutrition. And that's precisely where thinking that caloric balance is the only thing that matters becomes problematic.

Many people look amazing but have numerous underlying health issues or feel like crap all the time. And I'm not even talking about steroid users.

I'm talking about those who are undernourished despite being well-fed. What does that mean? It means that despite sufficient energy from their diet, many people lack several nutrients for optimal health and function. It can also mean feeding their body with food that can negatively impact health markers, cognitive capacities, and well-being.

The insidious thing? You rarely see or feel those negative impacts in the short term. For example, some foods will favor the development of chronic systemic inflammation. This leads to several issues but takes some time to notice. As such, one can go on eating a diet full of crappy, processed foods and not notice they're very gradually feeling worse.

That's the problem. The descent is so slow; you don't notice it's happening until you have a serious issue. You could be 20% less healthy and not notice a thing. But systemic inflammation makes almost every process in your body less efficient.

The same could be said for blood pressure. Unless you frequently measure it, you don't really notice it's getting higher. That's why it's called the "silent killer." When it's chronically elevated, it's a big risk factor for cardiovascular problems, kidney damage, and general well-being.

But again, you likely won't notice it. You'll only notice the serious complications from high blood pressure, which can come years down the road, even though the damage is being done much sooner than that.

Also, consider atherosclerosis: fatty acids deposits inside the arteries that become plaque or blood clots. You won't notice that either until it's too late.

The risk of developing atherosclerosis is heavily influenced by blood lipid profile, specifically the ratio of LDL and VLDL (bad/very bad) to HDL (good) cholesterol. This is impacted by your diet, specifically the type and quantity of fats you ingest and having a high sugar intake.

The point? Two people could try a nutrition plan with the same caloric intake and macros but have dramatically different levels of health depending on food selection.

Influencers and experts bombard us with diets and nutritional recommendations by only focusing on the weight-management aspect, which, subconsciously, pushes health lower and lower on our list of priorities.

Listen, I know that at 18, 25, or even 35, you don't want to talk about eating for health. You want to know how to get jacked and shredded. But you could regret it down the road when your body rebels against you.

Food quality matters when it comes to health. For example, processed foods are linked to a worsening of health (1), increased cardiovascular risk factors, and a higher likelihood of diabetes, kidney damage, and cancer (2).

Okay, sure. If you're playing devil's advocate, you might mention that someone who loses fat while still ingesting processed foods will have net-positive health benefits. And yes, overall fat loss might help compensate for the high intake of processed foods. But that doesn't make a person healthy; only less unhealthy than before. If they lost weight using mostly unprocessed foods, their health markers would be a lot better.

The processing of food to make it more palatable changes its biochemical impact (3,4).

Ingesting a high amount of sugar also increases LGCSI, mostly by affecting the gut microbiome (12). In fact, a high-sugar diet seems to be worse than a high-fat diet when it comes to increasing LGCSI (13). This easily indicates a potential flaw in the "flexible dieting" approach.

The biggest systemic inflammation impact will come from a diet that's simultaneously rich in sugar, high in omega-6 fatty acids (especially in relation to omega-3), highly processed, and low in fiber.

Because I suffer from kidney damage, I measure my blood pressure pretty much every day. That allows me to have a good idea or how my body reacts to certain foods.

A few years back, I was using a keto diet during a photoshoot prep. At first, I used "healthy keto" – most of my fat intake came from fatty fish, added omega-3s, almonds, avocadoes, and a smaller amount of red meat. At one point, it got boring. I started craving "tastier" foods. But, I figured, as long as my macros and calories stay the same, I'd still lose fat, so I started having more cheese, bacon, red meat, and even 35% cream.

Within two days, my blood pressure went from a daily average of 105/70 to 150/100! My calories, fats, carbs, and protein stayed the same. But the type of fats and the sodium level changed due to the different foods. After three days, I actually started to get feelings of heart tightness. That's an extreme response, but continuing this way even at a lower (or imperceptible) level would've been risky.

While the diet I was on says a lot about keto, it's a good lesson on how food quality matters just as much as reaching numerical quotas with your macronutrients.

The impact of nutrition on blood pressure and blood lipid profile is well established in literature too. For example, a recent review found that diets rich in fruits, veggies, omega-3 fatty acids, other sources of polyunsaturated fatty acids, and potassium were associated with a lower risk of cardiovascular disease, including lower blood pressure and a reduction in the likelihood of atherosclerosis (14).

On the other end of the spectrum, a diet rich in ultra-processed foods is associated with higher blood pressure and other cardiovascular risk factors like increased arterial stiffness (16, 17). Again, it shows that the type of food you ingest impacts your health.

Sure, if you lose fat through caloric restriction while consuming processed foods, the health benefits from the weight loss could counterbalance the negative impact of the food selection, at least in the short term. But if weight is regained (and it almost always is), you lose that counterbalance, and your health deteriorates.

I'm not against properly applied flexible dieting. However, there are risks if applying that form of nutritional planning gives you the license to eat anything you want within your macros.

It's probably fine to have 10-15% of your caloric intake in the form of fun foods, but the bulk of your diet should still come from fruit, veggies, fish, poultry, beef, nuts, eggs, potatoes, rice, etc. Ideally, it'll be rich in omega-3 fatty acids and lower in omega-6 fatty acids.

Saturated fats aren't the devil, but there's evidence that the combination of saturated fat and sugar can be detrimental to your blood lipid profile. I still favor consuming more unsaturated than saturated fats.

First, build your diet around unprocessed foods, which you can vary as long as you respect your macros, and then adjust portions (or caloric intake) based on your fitness goal.

What I see now is people focusing on weight loss or muscle gain first, then hoping to "fix" health issues as they come. While you might get away with that in your twenties, it's a strategy that'll come back to bite you later.

I believed in intermittent fasting, gave it a fair shot, then changed my mind about it. Here are the big drawbacks to fasting.
Diet Strategy, Losing Fat, Nutrition & Supplements, Tips
Michael Warren April 6 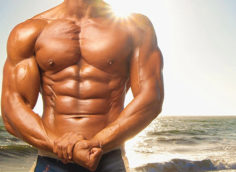