There are articles a human just shouldn't have to write. For instance, no one should have to write articles explaining why children shouldn't eat Tide Pods. Neither should anyone have to write about why taking an ocean swim while wearing an 84-pound weight vest isn't a good idea.

Not using a thermometer orally once it's been used rectally? Also shouldn't need an article. And I certainly shouldn't have to write an article about how damn stupid "detoxes" are for either weight loss or, groan, detoxifying your liver.

Yet here we are. There isn't a week that goes by where I don't overhear two or more morons talking about their latest detox product or regimen, and I'm not just talking about Oprah and Gwyneth.

Anyhow, maybe you and I can do our part to end this madness. Share this article on social media. Print it out and staple it to the forehead of detoxifiers. Do whatever you have to do to help stop this idiocy.

Through the Mouth or Up the Butt?

The people who drink or, alternately, force-feed their rectums strange teas, dubious supplements, or weird herbal concoctions are worried about the environmental toxins we're all being exposed to on a daily basis. I get it. That makes sense.

But it might make me feel better about the efficacy of these detoxifying substances if they could at least name a few of the toxins their products are supposed to target. Back in 2009, some researchers interviewed ten companies that manufactured detox products and they couldn't name a single toxin.

They kind of remind me of old-time actor Marlon Brando in the movie, "The Wild One," only without the cool:

The foolishness of the detox people is in the notion that we need juices or enemas or long periods of fasting to do what the body is largely capable of doing itself. These people don't think our livers, kidneys, or lungs are up to the task.

But I'll give them this: It's probably true that our bodies have never before had to contend with anything like the modern-day chemical onslaught, but drinking teas or lemon juice laced with condiments isn't going to help.

Bioaccumulation is a Real Thing

Some people really do need an actual detox, but these are people who have swallowed or injected too much alcohol, benzodiazepines, opioids, cocaine, methamphetamines, ketamine, heroin, or fentanyl, or maybe those who use the ol' swimming' hole next to the factory that bleeds lead, mercury, hexavalent chromium, or arsenic.

Exposure to too much or too many of the preceding needs medical intervention (activated charcoal in the case of drug overdoses and chelation in the case of heavy metal poisoning), not dandelion tea.

We are, however, in danger of "bioaccumulation" from a class of chemicals known as persistent organic pollutants, or POPs. Examples of these POPs include dioxins, PCBs, chlordane, heptachlor, and a whole bunch of high-value Scrabble words.

These POPs accumulate over time and are stored in body fat. Perversely, they might not even pose that much of a problem until you start to diet, when a surplus of the chemicals are suddenly released willy-nilly into the bloodstream, which can offset a lot of the benefits of fat loss and make you feel like one of those poor comrades that were forced to clean up Chernobyl after it blew.

But there are ways to limit your exposure to these things.

How to Do a Legitimate "Detox"

As mentioned, the body generally does an excellent job of mopping up unwanted substances. The liver processes a bunch of it, ultimately excreting it through urine via the kidneys or feces via bile from the gallbladder. Other substances leave the body through the air we exhale or possibly even through sweat, although that's still controversial.

Regardless, the body wouldn't mind a legitimate helping hand. Here are some "detox" methods that actually work:

What About Weight Loss "Cleanses"?

There's an entire sub-class of morons that also do detox cleanses to rid their body of fat instead of chemicals. They pretty much stop eating whole food for a pre-determined amount of time and subsist on nothing but condiment-laced liquids.

For instance, proponents of the "Master Cleanse," who claim "cleansing is basic for the elimination of every kind of disease," drink nothing but 6-12 daily glasses of lemonade spiked with maple syrup and cayenne pepper.

People who do it lose a significant amount of weight in a short time. Of course they lose weight; they're only getting a couple of hundred calories a day!

Unfortunately, a large part of the weight loss occurs because glycogen stores were rapidly depleted, and each gram of glycogen you lose drags 3 grams of water weight along with it. After the diet is over and carbohydrate consumption resumes, the glycogen comes back, the water comes back, and the weight comes back.

Whether you juice or cleanse for health or weight loss, it's a really silly way to do it. The body is more sophisticated than the drain in your kitchen sink and it doesn't need some juice or tea version of Liquid Plumber to keep it operating smoothly.

It may, however, benefit from a little bit of prevention through avoidance of "toxins" and maybe taking a select supplement or two to help keep its natural detoxification systems in primo working order.

Getting lean is a heck of a lot easier when you take advantage of this lioplytic smart bomb. Here’s how to do it.
Diet Strategy, Feeding the Ideal Body, Insulin Sensitivity, Nutrition & Supplements
Mike Roussell, PhD May 1

If your goal is getting in and staying in ketosis for fat loss, then skip these bogus “keto” supplements. They may even make you fatter.
Carbohydrate Control, Dietary Myth Busting, Feeding the Ideal Body, Nutrition & Supplements
Mike Sheridan August 31 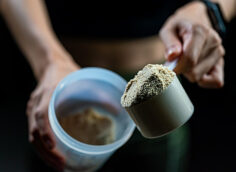