Planning a fat-loss diet around the documented calorie counts of various foods is pretty much hogcock (a combination of hogwash and poppycock, whipped out for those occasions when neither expression on their own is forceful enough for the situation).

So why am I so darn riled up about calorie counts? For a lot of reasons, but for starters, much of the science and practice is based on “energy absorption” data from a single study from the 1970s, no doubt conducted while the researchers had some Frampton tunes playing in the background.

The fact is, we absorb far fewer calories from food than that original research assumes we do. Secondly, there are a number of mostly unconsidered factors involved in determining the calorie counts of foods, so much so that the practice of counting calories is pretty much worthless.

I’ll make the story, or stories, short. The calorie counts of all foods are determined by burning them in what’s called a “bomb calorimeter,” which looks like a generic, stripped down Instant Pot, or something they store your brain in after you die for future transplantation into a robotic worker drone. 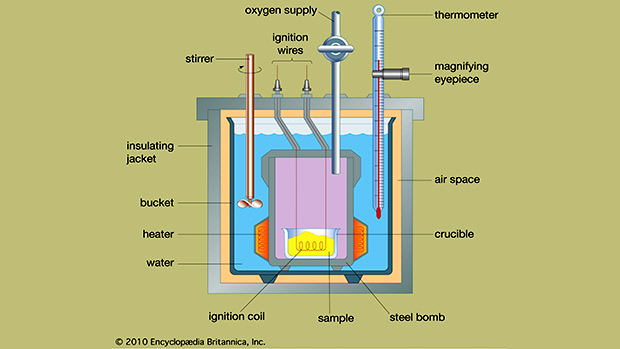 The thing is a box or cylinder with two chambers, one inside the other. The outer chamber is filled with cold water and when the food in the bomb calorimeter is burned, an observer records the rise in temperature of the water. If the temp of water goes up 1 degree per kilogram, the food has 1 calorie. If it goes up 2 degrees, it has 2 calories. You get the idea.

The bomb calorimeter is very accurate. The trouble is, our stomachs aren’t bomb calorimeters. We don’t incinerate foods, we DIGEST them, and the efficiency of said digestion is multi-factorial.

And, to be fair, that’s exactly what that Frampton-listening researcher from the 70’s figured out when he determined that humans absorb or “burn” approximately 95% of the caloric energy of the food (as measured by the bomb calorimeter) we eat.

Okay… but the research world should have done additional studies instead of just assuming that 95% number was written in hard cheese.

Fortunately, some Dutch researchers finally did do some additional research on that number and they found out that it was wrong. We absorb LESS than 95% of the food we eat – it’s closer to 90%, and it’s even less than that for females.

Okay, I’ll Poop in the Bucket, but I’m Not Weighin’ It

Those aforementioned Dutch researchers recruited 25 volunteers (all healthcare workers skilled in data collection) to track everything they ate and everything they excreted, even going so far as to collect their feces in 5 liter buckets.

The stools were then weighed and analyzed to determine how much total energy the volunteers had absorbed from the food they’d eaten, along with how much of each macronutrient they’d absorbed. Here’s what they found:

Perhaps surprisingly, women absorbed even fewer calories from food compared to men – 88% versus 91.8%. They also exhibited a “trend” towards less absorption of fat and carbohydrates than men, but it didn’t reach statistical significance.

If these findings are accurate and representative of populations other than Dutch people, too, it makes you wonder about the veracity of most of the other diet and calorie studies done in the last 50 years. Would an absorption rate of 90% instead of 95% skew the conclusions of many past studies? It seems likely.

As absurd as it sounds, it’s quite possible. Not only that, but there are numerous other factors that determine how much energy we derive from foods, all making the veracity of food labels and the science of calorie counting all the more suspect. 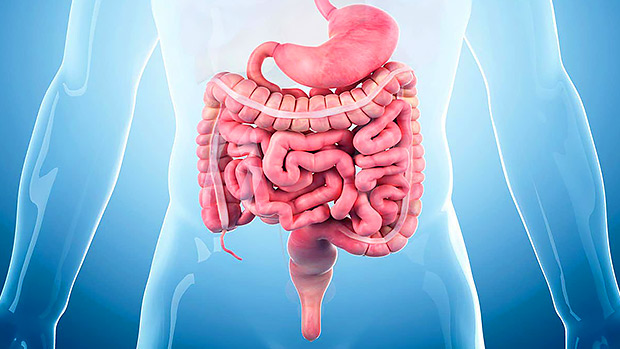 It’s long been rumored that native-born Japanese people have longer intestines that Westerners, but this rumor seems to be entirely based on the writings of a German physician named Heinrich Botha Scheube who conducted autopsies on 26 Japanese cadavers in the late 19th century.

Unfortunately, 26 people is too small a sampling to come to any definitive conclusions. Still, it’s somewhat plausible that various nationalities or ethnicities could have differing lengths of intestines that evolved because of their respective diets; those who ate lots of vegetables or roughage eventually developing longer intestines with which to extract the necessary calories and nutrients.

Along the same lines, another far more recent paper (2002) published in Surgical Radiology Anatomy reported that there was a correlation between intestinal length and body weight (based on an analysis of 100 cadavers), regardless of race or ethnicity. This suggests that people who had longer intestines absorbed more nutrients and calories and thus grew heavier.

Anyhow, it also matters WHERE the food in question is digested. The energy from simple foods such as honey is almost immediately sopped up by the small intestine, but more complex foods such as cassavas or nuts are peristalted to the colon before they get digested, but only with help from resident microbes. Either way, it greatly affects the calories derived from the food.

Some foods, like partially cooked meat, even involve our immune systems. That’s not to say that the immune system plays any part in actual digestion or how much energy we derive from the meat, but a slightly raw piece of meat might have pathogens that require the immune system to get involved, and that involves the expenditure of calories.

But the biggest variables in caloric energy are the actual physical structure of foods and, if applicable, the way a food is processed.

Mice Lose on Raw Sweet Potatoes, but Gain on Cooked

Certain foods are stubbornly resistant to digestion. Take almonds, for instance. The label indicates that an ounce has 168 calories, but digestion studies indicate that the average human absorbs only 129 of them. Same for cashews. An ounce is 137 calories instead of the 163 on the label. Pistachios and walnuts too.

It likely has to do with the sturdy cell structure of the nuts’ cell walls. Despite pulverizing them with our molars, a large amount of the cells remain undisturbed, thus protecting them from digestive juices, digestive microbes, and subsequent assimilation.

Pulses (grain legumes such as dry peas, beans, and lentils) might be somewhat similarly difficult to digest, thus affecting their ultimate caloric value, too.

Moreover, no two sweet potatoes (or no two examples of practically any fruit or vegetable) will have the same number of calories because they grew differently and they likely were cooked slightly differently.

Then there’s resistant starches, those foods whose molecular structure was changed – made more difficult to digest – by how the food was prepared or stored. Bread that is frozen and then toasted donates far fewer calories to the digestive system, as has rice or pasta that’s been cooked, allowed to cool for several hours, and then reheated.

Lastly, there’s the ultimate freer-upper of calories – industrial processing. The more a food is macerated, the more it’s pulverized, boiled, baked, and formed into little animal shapes, the less work the body has to do to assimilate its inherent energy. 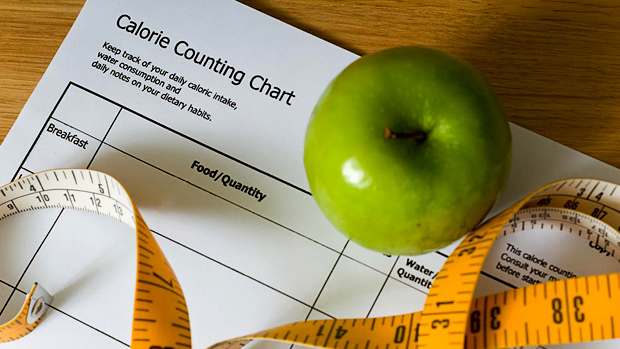 Are you getting the idea that counting calories to lose fat is, at best, an inexact science?

Let me make things even murkier. As I wrote about here, it’s an almost universally agreed upon fact that you have to reduce caloric intake 3500 calories below baseline to lose a pound of fat. We know this because, back in 1958, a guy named Max Wishnofsky burned a pound of fat in, yep, a bomb calorimeter and saw that it gave up about 3500 kilocalorie’s worth of energy.

And we all swallowed it, hook, line, and pork rind without realizing, again, that we’re not bomb calorimeters and that, moreover, weight loss is governed by a slightly more complex mathematical formula and doesn’t continue in a linear fashion.

It took a mathematician by the name of Kevin Hall, Ph.D., to figure out that over the course of the first year of a diet, people only lose about half of what’s predicted. In effect, the true number of calories it takes to burn a pound of fat works out to be closer to 7,000.

Before you scream in anger and frustration, consider what Hall said: “I suppose some people will be bummed out, but we believe it’s better to have an accurate assessment of what you might lose. That way you don’t feel like a failure if you don’t reach your goal.”

The main problem with the 3500-calorie rule was it failed to take into consideration that the body pivots and adapts in a number of ways to minimize or even erase the effects of reduced caloric intake. It doesn’t account for gender, either, or the fact that the metabolic rate drops as body weight decreases.

It also doesn’t take into consideration that counting calories is, for the reasons I laid out above, a woefully inexact science.

So What the Eff Do I Do Now?

Personally, I still take note of the supposed calories of various foods, but only as a barometer of how “bad” the particular food is, waist-size wise. For instance, if I see that some food I initially thought to be calorically benign has way more calories than I at first assumed, I’ll think, “Whoa, this food is messed up,” and I toss it aside for the dogs and buzzards.

No, if I really want to lose some fat, I don’t decide to cut 200 or 500 daily calories from my diet, especially when trying to do so is – based on what I laid out above – so damn imprecise.

Instead, I concentrate on portion control. Or a pre-planned, measured-out diet program. I don’t eat seconds. Instead of two dollops of mayonnaise on my roast beef sandwich, I use one. I avoid processed foods, whose calories are all too easy to absorb and, I go a little hungry once in a while.

Those tactics, while simple, are still powerfully effective, much more so than counting stupid calories.