Several months ago, while trying to master Chinese cooking, I went to a Chinese grocery store and bought some cucumbers, bok choy, and assorted Chinese vegetables, all presumably from Asia.

I ended up buying more vegetables than I needed, so I stored the remainder in my crisper and promptly forgot about them. I rediscovered them four months later while rooting around for something to throw in a stir fry. Amazingly, the Chinese vegetables appeared just as fresh as the day I'd bought them.

Maybe it's a side effect of using our banned pesticides! They've turned their Chinese cucumbers into agricultural versions of the long-lived, hard-to-kill John Coffey in The Green Mile!

I think I even I heard the things talking as I put them back in the crisper.

Maybe it wasn't the pesticides. Maybe it's some sort of super preservative that the Egyptians used to make mummies. Regardless, it should make you wonder what in God's name is being put on produce.

We do know that imported fruits and vegetables usually have three times the amount of pesticides that our U.S. grown counterparts have, and that the FDA only manages to check about 1% of the stuff we import.

That's not to say U.S. grown produce is much better. One third of the "home-grown" versions contain multiple residues, exposing us to cancer-causing chemicals and possible neurological disorders, not to mention the disturbing endocrine disruptions caused by many of these chemicals.

As you might guess, some fruits and vegetables are worse than others. Some, because of their leafy configuration, attractiveness to certain insects or fungi, or length of growing season, require more pesticides than others.

If you eat just five fruits and veggies from this list, you've ingested at least 10 different pesticides, many of which will gleefully take up residence in your organs and body fat. 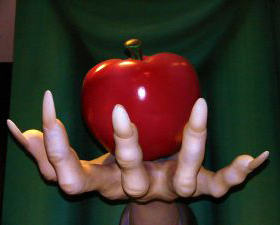 Apples? They've got some Vitamin C but otherwise have little else in the way of measurable nutrients or carotenoids. In contrast, they contain a shitload of pesticides. In fact, have been more pesticides (36) detected on apples than any other fruit or vegetable, and up to 7 different types have been found on a single sample.

You're mad about the strawberries because you and your girl like to dip them in chocolate Metabolic Drive and feed them to each other. Get over it, Romeo. They're a good source of Vitamin C, but so are a lot of other fruits and vegetables. What they do have in abundance, though, is really high levels of fungicides, two of which are probable carcinogens. Another of these fungicides interferes with Testosterone.

Fortunately, there's also a list of fruits and vegetables that are relatively clean in terms of pesticides.

You have several options.

I know, I know, lately I've been the harbinger of bad nutritional news, and I suspect that the impulse of the average reader is to go out on a big cancerous, limp-dicked (from the hormone disrupters) foodfest and eat everything you want to eat since it's all going to kill you anyhow.

I can appreciate that overreaction, but I'm still a firm believer in knowing the truth about anything and everything regardless of the pain or consequences.