Why We Eat Red Meat

Weightlifters, probably more than any demographic group, are hooked on red meat. They crave its taste properties that combine umami (a pleasant savory taste imparted by glutamate), saltiness, and the plain old deliciousness of seared fats. But more than that, weightlifters seem to ascribe almost magical and definitely mythical powers to red meat, believing that it makes them a lot stronger and at least a little bit more manly.

But if you put a scrupulous eye up to a piece of rib eye, you see that red meat isn't so magical after all. At best, it's a high-protein food that's a bit nutritionally drab. At its worst, it's a processed nightmare that rivals a Twinkie in its naturalness.

That same chicken probably weighs about 10 pounds before it meets its end, whereas steer usually weigh in between 1200 and 2400 pounds. To get that big, the steer ingested a hell of a lot more food and drugs than the chicken did. Since it lived that much longer, weighed that much more, and got chemicaled up that much more, it likely contains a lot more unwanted stuff in its meat.

This is just a fact of life in general. Bigger animals or animals higher on the food chain are likely to be walking repositories of bad chemicals, and when you eat these animals, these byproducts of civilization become even more concentrated in your tissues. Thankfully, you, at the top of the food chain, aren't high on anything's diet because you're likely as carcinogenic as a shovelful of toxic landfill.

It's just too bad cows aren't the size of sardines. They'd likely contain far fewer chemicals and you could eat 'em on toast or sprinkle them on pizza.

This size and chemical relationship might turn out to be a minimal problem. Alternately, it could possibly prove to be a major contributor to modern day scourges like cancer, diabetes, or autoimmune problems. Regardless, knowledge of the problem might make red meat less attractive to you.

Organically grown meat is certainly a preferable option, but a big animal raised in organic conditions is still going to contain a whole lot of the byproducts of civilization.

Most people think that red meat is an essential component of a well-rounded diet, but it's woefully lacking in nutrients. Ancient cultures, including our own Native Americans, thought so little of muscle meat that they fed it to their dogs, or maybe dried it out and used it as coasters to keep their maize martinis from mucking up the coffee table.

Instead of eating muscle meat, they ate the nutrient-packed organ meats that modern culture mostly discards; stuff like livers, kidneys, and spleen that are as vitamin and mineral dense as many fruits and vegetables.

It's true that muscle meat is high in zinc and iron, but chicken is also a fairly good source of those two minerals. Red meat does hold a big edge in vitamin B-12, but very few people are deficient in it as a little goes a staggeringly long way.

There are those, of course, who swear that red meat makes them feel stronger, but this is likely due to the perceived powers of red meat. Sure, red meat has creatine, but you'd have to eat a 40-ounce steak to get a measly 5-gram serving of the compound.

Others ascribe near-magical powers to eating a bloody cut of meat, but that red-tainted juice isn't blood, it's myoglobin, a protein that turns red when it's exposed to oxygen.

As far as protein, animal protein is animal protein, regardless of whether it comes from cows, chickens, fish, weasels, or protein powder. In fact, if you really wanted to eat a protein that fortified your health as well as it built muscles, you'd regularly ingest milk proteins as they've been shown in multiple studies to improve immune system function.

(And yes, milk proteins are derived from cows, but most processing methods remove the contaminants that might be found in the meat.)

A few years ago, America collectively crapped its shorts when it became known that meat manufacturers were selling us "pink slime." As you recall, pink slime is salvaged scraps of beef that are simmered at low heat, centrifuged, and then exposed to a puff of ammonia to kill any bacteria.

Conceptually, it's unappetizing. There's no proof that it's actually harmful, though, and the meat industry is probably correct when it says, in defense, that it would have to slaughter an additional 1.5 million cattle to make up for the loss of this filler.

Regardless, manufacturers put the kibosh on the production of pink slime, but they instinctively knew that Americans have the attention span of 18-year old meth freaks and so they've slowly let it seep back into the market, unbeknownst to most. Again, it's probably not harmful, but it is a bit repugnant.

Another repugnant practice is the "gluing" together of scraps of filet to make a nice, big, round filet steak. The "meat glue" they use is transglutaminase, an enzyme once culled from animal blood but now made through the fermentation of bacteria.

It's probably safe, but it's just a big disgusting and probably a whole lot maddening to know that the expensive filet you purchased might just be a jigsaw construction made from several cows.

Without having "discovered" red meat, human beings would likely still subsist on agriculture alone and be relatively scrawny creatures with tiny brains, kind of like the people who do SoulCycle.

But red meat isn't as healthy – or even necessary – as it once was. There are plenty of other meat proteins available, as well as highly evolved protein powders made from milk.

There's no reason red meat can't still be part of your healthy strength-training diet, but as you've no doubt been told numerable times, try to at least choose, if affordable, organically grown, grass-fed meat. Above all, stop believing that red meat is a nutritional powerhouse that gives you superhuman strength. 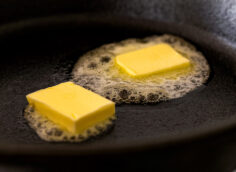 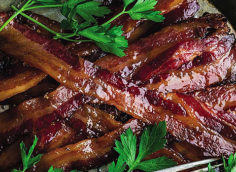 They say the bacon in heaven doesn't cause cancer or plug up your heart. Here's how to make a little heaven on earth.
Dietary Myth Busting, Feeding the Ideal Body, Nutrition & Supplements, Tips
TC Luoma April 8
Two years ago my wife and I tried cyclic ketogenic dieting. We knew that many of the concepts behind these diets were valid but there was a practical, behavioral problem for us: we could no longer function as a stable, productive human beings on such low carb intakes.
Feeding the Ideal Body, Nutrition & Supplements
Lonnie Lowery, PhD January 30