I’m lying on my back in the alleyway behind my house, gasping for breath. My legs are burning, my traps are burning, and even my spine is burning.

No, I haven’t been mugged and bludgeoned with Louisville Sluggers. Instead, I’ve been pushing the Prowler and doing what I call farmer’s death marches, which are kinda’ like farmer’s walks, only you pick up a downright inhumane weight and pretend you’re being cruelly spurred on by the Japanese Imperial Army and instead of walking only to the end of the neighbor’s garage, you march all the way to freakin’ Bataan while trying to avoid being bayoneted or getting dysentery.

The morning winter sun is flash frying my retinas right through my closed eyelids and I’m vaguely aware of a pebble burrowing itself into the back of my head. Part of me is kind of hoping that I won’t be run over by one of those run-silent run-deep Prius cars and turned into road kill, or more accurately, alley kill, while another part of me is hoping one will show up and put me out of my misery.

As I lay there, in the throes of hypoxia, I start to experience rapid, semi-disjointed thoughts and memories. Poor old Topsy lumbers into my thoughts first.

Topsy was a much-abused 28-year-old circus elephant that finally went old Tarzan-movie-crazy and killed his sadistic trainer when he threw a lit cigarette into Topsy’s mouth. For that, Topsy was sentenced to die. And that bastard Thomas Edison, heart as cold as a 45-pound Ivanko plate in February and ever on the look out for a publicity stunt, electrocuted Topsy with 6600 volts of AC current (after first feeding him three carrots laced with 460 grams of potassium cyanide…just in case).

In my current semi-hallucinatory state, I feel just a little bit of camaraderie with Topsy. Granted, he had it much, much, worse… hell, he was electrocuted, and as I lay there trying to recover, my oxygen-deprived mind somehow starts to equate Topsy to the other massive, rough-skinned animals of the world, namely the weight lifters.

I start to think of all the gyms I’ve dragged my overstuffed gym bag into over the years and all the poor slobs I’ve seen tugging and pulling and pressing at various pieces of metal. I see their faces and bodies in a rapid-fire montage and suddenly the weird, unspoken, ugly paradox of lifting weights hits me…

How can that be? The activity that’s supposed to be synonymous with physical growth and change so often results in no discernible change! If they do change, it comes by way of getting just a little bit beefier, like Black Angus cattle on a feedlot.

In an ever-changing world, these souls are paradoxically some of the only things that remain constant. They’re like going to granny’s house ten years after your last visit; you know that the same blue flowered vase will be on the mantle and you know the same family pictures of booger-eating nephews and sad old paintings of moldy fruit bowls will be on the wall, and likewise when you revisit a gym, the same Tom, Dick, or Harry will be doing lat pulldowns or triceps kickbacks.

Oh, he’ll be a little grayer or his skin a little pastier and his Bill Clinton thighs a little doughier, but otherwise he’ll look the same. And sure, other guys get gradually bigger and stronger and just plain physically better over the course of the years, but the ugly truth is they’re oh-so rare. So what is it, asks my fried brain, that distinguishes the physical haves from the physical have nots?

And then a kind of epiphany hits me, and I stagger up like someone doing a Turkish get up with a 100-pound kettlebell and lurch indoors to write it down, lest it escape me like some stanzas that came to a poet during an opium-fueled dream. 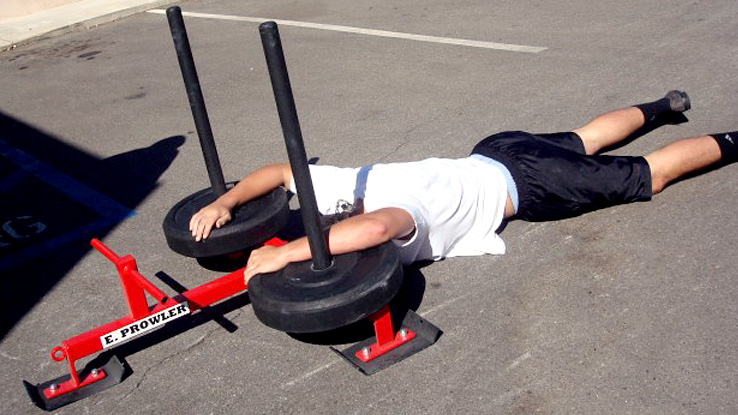 Fear, I realized, is the single best predictor of success – not the absence of fear, but actually experiencing it.

Fear worthy events might include setting a new PR, doing lots and lots of volume, getting a tremendous burn, some endurance feat, or, what my experience has led me to believe is the most primal and most beneficial fear – loading up the spine with a hellacious weight. I’m talking about heavy squats, deadlifts, loaded carries, and overhead presses.

And you sure as hell don’t experience that kind of fear from doing an inordinate amount of biceps curls or a ton of leg extensions. No, the fear I’m talking about only comes about when you know you’re going to load up the spine with an amount of weight that’s simultaneously claustrophobic and exhilarating and terrifying.

The people who load up the spine feel nervous before leaving home and while driving to the gym and they get downright grim when they walk in the door. Oh, they might be kidding around, hurling good-natured insults at other lifters, but it’s the iron equivalent of whistling in a graveyard.

No weight training program or maneuver or technique will deliver as much muscle as loading up the spine will. The primary function of the spinal column is to protect the nervous system; protect the brain and that delicate pasta-noodle of a spinal cord, so repeatedly applying a load to it will slave-whip the body into manufacturing extra muscle to protect it, pronto.

That way, you and your spine won’t disintegrate into a pile of vampire dust the next time you decide to subject your spinal column to so many newtons that Dr. Stuart McGill jumps out of the towel bin waving his arms and yelling, “Holy shit, are you nuts!?!?”

Okay, it’s more likely the added muscle is just the complex physiological/hormonal side effect of working so many muscles simultaneously at such a high intensity, but regardless, it’s all too rare. I mean, how many people do you even see grimace during a set? Most people go through their entire workout with the same bored, I’d-rather-be-doing-anything-else look on their face as an American male watching his daughter play pee-wee soccer on Super Bowl Sunday.

It connotes a level of effort on par with getting a tan or shooing flies away from your summertime glass of lemonade, but watch the face of somebody who’s loaded up the spine with heavy weight; it gets butt ugly, fast. They look like they inadvertently swallowed a baby porcupine with their morning protein shake and now they’re trying to pass it through their urethra.

Not many, I’ll bet, but I will bet on this: The people who have to overcome some primal fear when they come to the gym, who have to get mad-dog crazy before lifting a heavy weight, who have to collect their spilled guts after a grueling set, are the ones who actually do look better and get stronger year after year.

And you don’t have to be in a hypoxic state to see it.