There’s a whole bunch of foods quarterback Tom Brady of the New England Patriots won’t eat. His avoidance of these things is so strong that Bill Belichick could put any one of them on a spoon and make cool airplane noises and Brady still wouldn’t open his mouth.

And it’s not because Tom’s a persnickety eater. Nope. It’s because he’s under the dietary control of some chef/nutritionist Svengali who’s made him adhere to some outdated notions about which foods are good for an athlete and which aren’t. For the most part, it’s a breathtakingly silly list.

Yeah, But He Must Be Doing Something Right…

But let’s dispense with the one obvious supposed defense of his dietary practices. Yeah, Tom is ancient by quarterback standards, yet he’s arguably still the best QB in the NFL so he must be doing something right.

So is his longevity at least partly because of his stupid diet? Probably. At the very least, his list of no-no foods includes some sensible things like white flour and white sugar, which means he’s avoiding traditional junk food entirely.

Still, attributing his longevity to his other dietary restrictions reminds me of when the local news station interviews some female Yoda-clone that lived to be a hundred and wants to know what her secret is.

Almost all of them will have some sort of answer, whether it’s having a shot of bourbon a day, eating raw egg yolks, or, I don’t know, never having eaten the Grand Slamwich at Denny’s. It’s likely none of their reasons had anything to do with their impressive lifespan. Instead, they were probably just genetic anomalies, same as Tom.

So let’s take a look at what “bad” foods and drinks are on Tom’s list of forbidden foods:

Good Lord, an entire food group? Let me guess, you’re afraid of fructose, right? I guess you missed out on the two, huge meta analyses in the American Journal of Clinical Nutrition that pretty much said “never mind” to the whole fructose is worse than alcohol for your liver and will make you fat trend?

You ever hear of phytochemicals? Polyphenols, for instance? Carotenoids? Fruits contain them in abundance, and these chemicals have hundreds of known and probably tens of thousand of unknown positive implications for human health and, ergo, athleticism.

If you were playing a football game against the phytochemicals in fruit, you know what the half-time score would be?

Your 6 points would be the result of Gronk slipping past the polyphenols and carotenoids when they saw his melon head and were momentarily fooled into thinking he was one of their own. Oh, and Tom? There’s zero chance of a fourth quarter comeback.

Apparently, Tom avoids these three foods because they’re “not anti-inflammatory.” What kind of happy horseshit is that? Again, you’re not considering phytochemicals, at least as far as the peppers and eggplant. Hell, the anthocyanins that give these two vegetables their red or purple color are alone worth their weight in Vince Lombardi trophies.

And a number of studies show that mushrooms increase production of killer T lymphocytes, so don’t call me if you wake up with a tumor the size of defensive end Trey Flowers.

Oh man, how granola can you get? You sure you don’t play for the Sausalito Sommeliers or the Portland Pathcoulis instead of the New England Patriots?

The only time you should use pink “Himalayan” salt is when you and Giselle are having mock margaritas made with asparagus juice and you want to salt the rim with something that matches her Victoria’s Secret sleep panties.

As I’ve written before, “…fancy pink sea salt contains a few more nano particles of certain elements like calcium, iron, copper, and a few others, but they’re trace elements.

“For instance, a teaspoon of sea salt contains around .2 mg of iron. That’s fine, but your daily value of iron, if you’re a man, is about 8 mg. If you’re a woman, it’s about 18 mg. Either way, if you’re depending on sea salt to fulfill your daily requirements for certain minerals, you’re not a human – you’re a flounder.”

Athletes who sweat a lot are particularly vulnerable. Not enough iodine and your thyroid takes a hit worse than any helmet-to-helmet collision and it starts seeing birdies, consequently putting your metabolism on the DL. 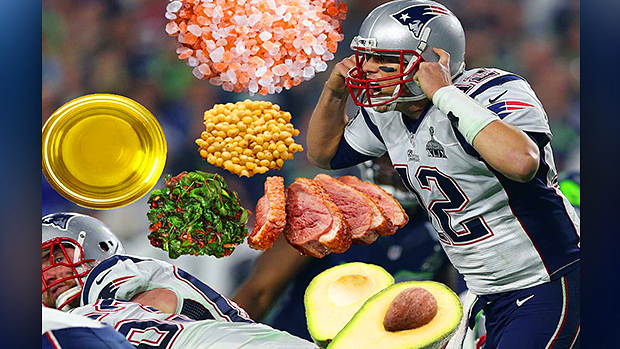 His list actually specifies caffeine, but that of course includes coffee, which is a big mistake. Let me again refer to the over 1,000 biologically active compounds in coffee, which offer a whole litany of beneficial effects to humans.

Coffee drinkers have fewer cases of cancer, diabetes, Parkinson’s, and Alzheimer’s. The don’t stroke out at much. They don’t get as depressed after being beaten by underdogs. Their livers don’t get fatty. They plain live longer. It helps athletes free up fatty acids to use as an energy source. It even increases satellite cell recruitment to repair injured muscle cells.

And yes, we understand your nervous system is like a delicate petunia and it can’t be polluted by a neurostimulator. Phooey. Athletes since the first Olympics have used caffeine to aid them in training and competition.

Okay, new rule: If the geneticists and plant biologists who study and work with genetically modified organisms or foods aren’t afraid of them, you can’t fear them, either.

“Frankenstein monsters. Things crawling out of the lab. This is the most depressing thing I’ve ever dealt with. Today, we’re facing the same objections we faced 40 years ago. In spite of hundreds of millions of genetic experiments involving every type of organism on earth, and people eating billions of meals without a problem, we’re back to being ignorant.”

Lobby for oversight of these foods, but if you don’t have at least a little bit of a science background, you don’t get to complain and/or worse, spread disinformation.

At first I thought Tom was talking about Popeye’s girlfriend, but even that puzzled me because Olive and Giselle have kind of the same slim-hipped body type, so you’d think he’d go for her.

Then I realized he was talking about stuff nearly every health-conscious human on the planet cooks with and drizzles over their salads and vegetables and I was even more freaked out.

Instead, like all the other granola crunchers, he prefers coconut oil. Listen, coconut oil is fine, but all those arguments about how portly Polynesians, despite eating more coconuts in a week than most humans eat in a lifetime, have a low incidence of heart disease just doesn’t wash.

Polynesians eat coconut flesh and coconut cream, not the refined oil we get from Whole Foods. This oil that everybody goes gaga over lacks most of the polyphenols and vitamin E that whole coconuts contain.

So unless you’ve got that shirtless Tongan from the opening ceremony of the Olympics cracking open fresh coconuts for you, start using more extra virgin olive oil (EVOO) in place of some of that coconut oil.

EVOO contains a plethora of polyphenols that help your body burn more fat, increase insulin sensitivity, and reduce your chances of getting a whole host of medical conditions or diseases. EVOO even makes your balls bigger, which suggest greater testosterone production.

Now I’m not suggesting coconut oil deflates your balls, but it’s probably best used in moderation. Try it on your boyish hair to luster it up even more, Tom.

Oh boy, another whole food group. Tom, I’m not sure why you avoid dairy, but it’s probably because of the oft-heard “mucus” theory, the China Study, or fear of bovine growth hormones. Okay, let me punt, pass, or kick those three fears aside.

The people in the study reported that both drinks made their saliva feel thicker and they swore that both beverages gave their mouth, throat, or tongue a coating. Regardless, neither drink seemed to effect sinus congestion, breathing, coughing, or post-nasal drip.

This 2005 study scared the be-jesus out of a lot of people, but the thing is rife with inconsistencies and contradictions. It said, for one, that dairy and animal fat cause cancer, as evidenced by a statistical analysis of the Chinese people.

But there, right in his study, but apparently ignored by the author, are statistics on the Tuoli peoples of China who eat twice as much animal protein as the average American – including about two pounds of dairy a day – and yet appear to be free of any usually diet-related diseases.

The China Study author also beats up on casein, which he describes as a potent carcinogen. The trouble is, human breast milk contains a sizeable amount of casein. As nutritionist Denise Minger writes, “Should women stop breastfeeding to reduce their children’s exposure to casein? Did nature really muck it up that much? Are children who are weaned later in life at increased risk for cancer, due to a longer exposure time to the casein in their mothers’ milk?

“It does seem strange that casein, a substance universally consumed by young mammals, is so hazardous for health, especially since it’s designed for a time in life when the immune system is still fragile and developing.”

Lastly, there’s dairy and the GH thing, which I’m guessing is a concern to Brady and his nutrition Svengali. GH is a big protein molecule with almost 200 amino acids. If and when it hits your digestive system, it gets cleaved up into its constituent amino acids, just like any protein.

Besides, cows produce some GH naturally, and the levels of it found in the milk of cows treated with it (zero to 10 parts per billion) hasn’t been found to be any higher than levels found in cows not treated with it.

Have some dairy, Tom, particularly the fermented kinds like yogurt or kefir. They contain a little bit of almost everything we need. Besides, you’re getting old, after all, and you don’t want to end up doing constipation commercials like Jamie Lee Curtis when you inevitably retire.