I'm not going to talk about all of those factors, but I will focus on edifying you on #2. However, we're not going to focus on the all-important workout feeding window: before, during and post-training. Instead, I'm going to give you the latest on how important it is to consume more of your calories early in the day. That's breakfast, mi amigo.

I'm sure you've heard the notion that you don't want to eat too many of your calories late in the day. You know what I'm talkin' about, right? Like how that midnight snack of pizza and beer may end up re-shaping your body like a pepperoni? So is eating late the culprit? Or is it the fact that we tend to eat crappy food late at night? Let's face it, nobody ever craves a chicken breast with broccoli at midnight.

(Just to digress, isn't it a bit superfluous to specify in the journal Obesity that you used overweight and obese subjects? Is there any other kind of subject in this journal?)

So what did they find?

This is a perfect example of how the timing as well as the distribution of your meals profoundly affects body composition. We already know that the peri-workout feeding window is critical for improving body composition, and now we also know that shifting your daily calories more towards the beginning of the day is helpful as well.

In a similar study published in another journal dedicated to the corpulent (International Journal of Obesity), scientists looked at the effect of meal timing on weight-loss during a 20-week intervention. Test subjects were grouped as early eaters and late eaters, according to the timing of the main meal (which, in this Mediterranean population, was lunch).

Fifty-one percent of the subjects were early eaters and 49% were late eaters – defined as eating lunch before 3:00 PM or after, respectively. Despite the fact that caloric intake, macronutrient composition, energy expenditure, appetite hormones, and sleep duration were the same for the late versus early eaters, the late eaters lost less weight then the early eaters, thus proving once again that it's better to consume more of your calories early in the day (2).

In the hierarchy of meal timing, I'd posit that the most important "meal" of all is the one consumed around the workout. A small meal 30 minutes or less pre-workout, comprised of carbs with a modicum of protein, combined with a during-workout drink, followed by a post workout meal of 20-40 g of protein is a good start.

Editor's note: Biotest's Plazma™ achieves the peri-workout goals laid out in the preceding paragraph, plus a whole lot more.

After the peri-workout window, consuming the majority of your calories early in the day could be an additional strategy for altering body composition, so bacon and eggs for everyone! All that protein (and fat) will improve your satiety and perhaps keep you from hogging out later in the day (3). There's even scientific proof that eating a protein-rich breakfast with eggs is better than eating a carb-rich breakfast with bagels. An 8-week study found that the egg-based breakfast consumers had a 65% greater weight loss, a 34% greater reduction in waist circumference, and a 16% greater reduction in percent body fat. Eggs trump bagels for weight loss. Sorry, Einstein (4).

Bottom line: Given the choice, it's best to consume more of your calories early in the day. 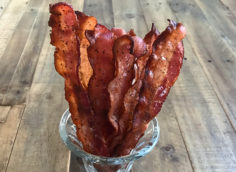 A single stressful event can wreck your gut health and your sleep... for weeks. Eat these foods and stress can't touch you.
Feeding the Ideal Body, Nutrition & Supplements, Superfood, Tips
Chris Shugart February 27