By now, you've probably heard about the big study that tied mortality to carbohydrate intake. The conclusions read kind of like Goldilocks got together with Stephen King:

"This carbohydrate intake is too low!" Goldilocks exclaimed, and sure enough, it resulted in high oxidative stress and rapid biological aging, leading to a horrible, convulsive, early death with maggots... lots of maggots.

Goldilocks didn't fare any better with the next carbohydrate diet. "This carbohydrate intake is too high!" It led to a chronically elevated glycemic load with severe metabolic consequences. The last time anyone saw her, she was fat and blind, staggering along the docks selling her body so she could buy yet another bag of Nacho Cheese Doritos, weeks away from premature death.

Then she tried the last carbohydrate diet. "Ahh, this moderate carbohydrate intake is just right!" It allowed her to live a long, healthy life, free of nutritional or metabolic diseases and free of disgruntled bears.

The revelations about high-carb diets being bad for you didn't surprise anyone, but the news that low-carb diets resulted in shorter life spans probably caused some furrowed brows among most lifters because we typically live in the neighborhood of the 40/30/30 protein/fat/carb ratio, which, according to the carb study, supposedly targets us for a premature death.

So, are our low-carbs diets going to kill us early? For keto dieters, maybe. But for the rest of us? No.

A Short Synopsis of the Study

In case the study has already slipped from your memory, researchers from Harvard examined over 25 years of data from about 15,500 adults from four separate U.S. communities. They then pulled data from seven other studies involving more than 432,000 people in 20 countries.

Why High or Low Carbs Can Cause Early Death

It's fairly straightforward. The low-carb people who up and died early tended to eat fewer vegetables, fruits, and grains (all big sources of carbs), thereby cumulatively missing out on tombstone-sized helpings of beneficial fatty acids, fiber, phytochemicals, vitamins, and minerals. To "make up" for that dearth of carbs, they presumably ate lots more fatty meats that angried up their hearts.

Why, up and dying from that kind of diet is just good ol' common sense.

Conversely, the high-carb people died because a lot of the high-carb food they ate likely consisted of the stuff an unsupervised six-year-old would eat if he were allowed to roam free in a grocery store.

And the moderate carb people? Their diets were nutritious. It kept their blood glucose low. They responded by living longer.

A Little Bit of Context

If you're a lifter who's a regular reader of T Nation, a devotee of "The Zone" diet or, for that matter, anyone who's interested in health and/or having an aesthetically pleasing body, you're probably eating an amount of carbs that puts you in what the researchers deemed the "early mortality" zone, which is a sub-50% daily carb intake.

Despite what the Harvard scientists suggest, you're likely not going to die earlier than your moderate-carb intake cohorts, unless, ironically, you all get hit by trucks carrying corn to market.

That's because you're not the typical low-carb person described in the study. While you might eat a relatively low-carb diet, you're presumably relying on high-quality sources with carefully chosen vegetables, fruits, nuts, and grains.

You're not simply dropping carbs or worse, entire food groups, from your diets and replacing them with large quantities of fatty meats. If you were, you'd be an Atkins or keto dieter, and then all longevity bets would be off because you pretty much fit the low-carb, early-dying demo described by the researchers.

Of course, I'm guessing that the Atkins or keto people aren't going to keep following those preternaturally low-carb diets for 25 years. That'd be an open invitation to the grim reaper. But the rest of you? You're safe. Carry on.

"The aim of the legal action is to force the fast-food industry to "offer a larger variety to the consumers, including non-meat vegetarian, less grams of fat, and a reduction of size of their meals."
Feeding the Ideal Body, Nutrition & Supplements
Lonnie Lowery, PhD August 9

Marketers are tricking you into thinking that your steaks and burgers have the right ratio of fatty acids. Here's the real story.
Feeding the Ideal Body, Nutrition & Supplements, Tips
TC Luoma July 17 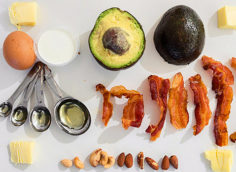