Nutrition experts are always having the same argument: Is fat loss just a matter of "calories in, calories out" or do other things have a bigger long-term impact, like how food quality and macronutrient choices affect our hormones, eating behaviors, and ultimately our body compositions?

Several studies we've written about here at T Nation point to the latter. For example, when two groups of people eat the same number of calories, the group who eats more protein as part of that caloric intake loses more fat and stays leaner.

Also, people who eat earlier in the day, like having a big protein-packed breakfast, tend to be leaner and lose fat more successfully than breakfast skippers. And of course, those who consume certain nutrients before, during, and after training get better results from their workouts, even if daily calories are the same.

It's pretty clear that it's not as simple as "calories in, calories out," no matter what the chubby dieticians say. Now researchers have looked into another piece of the puzzle: sleep habits.

Are you one of those folks who wakes up earlier than everyone else and usually goes to bed a little earlier too? Or are you a night owl who either stays up late and sleeps in, or stays up late and slap-fights the snooze alarm for half the morning? Your "type" affects your dietary choices.

In a Finnish study, 1,854 random people had their sleeping habits and eating behaviors monitored. Researchers wanted to see how circadian or biological clock rhythm (chronotype) affected what they ate and when they ate it. The subjects kept food logs and also had to take photos of every meal.

The morning types, those people who woke up early and went to bed early, made better food choices than the evening types – the folks who stay up late.

Although both groups ended up eating about the same number of calories in a day, the scientists concluded, "Postponed energy and macronutrient intake timing of evening types with unfavorable dietary patterns may put them at higher risk of obesity and metabolic disturbances in the future."

They also noted that timing of energy intake (when you eat and not just what you eat) may have major effects on metabolic health: "Energy intake timing may have substantial effect on metabolism independent of total energy intake and quality of diet."

One theory here, backed up by other studies, is that self-control wanes in the evening, so it makes sense that the later you stay up, the unhealthier your choices. If you've ever woken up surrounded by empty beer cans and chimichanga remnants stuck in your teeth, then you get it.

Another conclusion is that eating a bigger, higher protein breakfast leads to better food choices all day. Night owls generally don't feel like eating breakfast (or don't wake up early enough to make one) and are more likely to suck down some juice or a sugary coffee drink.

What makes you an early bird or a night owl is based in part on your natural internal clock type. Some people are just wired one way or another, though most of us fall somewhere in the middle and have a choice.

Lifestyle plays a role, and researchers noted that younger, inactive single people are more likely to be night owls. A person who's in a stable relationship, has a more demanding job, and who works out is more likely to be an early bird – he has stuff to do, after all, and his body is screaming for some recovery time after leg day.

But even natural night owls can offset the negative effects by at least having a high-protein breakfast. This will keep them from going too calorie-crazy at midnight. Not doable? Then at least make sure those late night meals are high in protein, contain some good fats, and aren't made up of deep-fried flour and sugar.

Likewise, a sleep aid that allows for a deeper, more recuperative sleep may help turn a late nighter into an early riser. Try 2-3 capsules of Z-12™ for a few weeks and you may be able to reset your clock or at least shift it in a way that helps you make better eating choices.

The research is questionable, but even if there is a link between meat and cancer there are 8 things you can do to prevent the risks. Check 'em out.
Dietary Myth Busting, Feeding the Ideal Body, Nutrition & Supplements
TC Luoma December 1 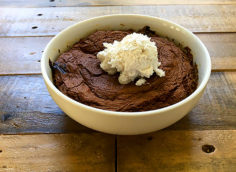