The Body Isn't a Good Multitasker

Your body likes to be either burning or building, but not both. There are a few exceptions to this rule, but the two big ones are beginners and those using anabolic hormones.

This is the Law of Metabolic Demand. The body responds to what you subject it to. This is a major insight to the calorie argument. The idea that calorie excess always leads to fat gain and calorie reduction always leads to fat loss is not accurate. You can reduce calories and lose weight, but that weight may or may not be mostly body fat.

Research tells us the standard "eat less, exercise more" approach to dieting leads to about 20-50% loss of lean tissue (water, glycogen, muscle). That's important because metabolic rate (BMR) accounts for over two-thirds of calories burned at rest and more than half of BMR is determined by your muscle mass.

So you can be increasing calories and gaining weight, but that weight may or may not be fat. You could instead be gaining lean tissue (water, glycogen, muscle) and if you do, you're doing your metabolism a favor. The demands you place on your body will determine whether excess calories become fat or muscle and whether reductions in calories will result in fat or muscle loss.

This is why experts agreed that weight training should be the dominant form of activity in fat loss programs. It's the only type of movement that can funnel extra calories into muscle gain versus fat. But it's not a high calorie burning form of exercise.

There's a study to illustrate the point. It was published in the April 1999 Journal of the American College of Nutrition and looked at two groups of obese subjects put on identical very low calorie diets. One group was assigned an aerobic exercise protocol (walking, biking, or jogging four times per week). The other group was assigned resistance training three times per week and did no aerobic exercise.

What you do has a direct impact on whether a calorie is a calorie. You can't separate calories from lifestyle. 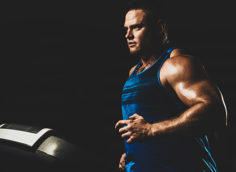 Ready to lose fat? When are you planning to add cardio? Here's the mistake that most people make.
Losing Fat, Nutrition & Supplements
Christian Thibaudeau July 3
Despite years of anti-fat sentiment, it's becoming clear that the right kinds of fats can make you healthier, smarter, more muscular, and leaner.
Feeding the Ideal Body, Nutrition & Supplements
John Berardi, PhD May 30