I've been advocating a particular meal strategy for years, but there wasn't all that much good research to back me up. Regardless, I couched my basic premise in an analogy:

Carbohydrate is like uranium in a nuclear reaction, and protein, fat, and fiber are the control rods with which you regulate the reaction. No "control rod," (protein, fat, or fiber) and the "nuclear reaction" runs amok. "Radiation" (insulin) levels skyrocket and you soon wake up with a waistline that looks like Godzilla's.

The clues were always there (including some research), though, and I'd done a lot of experiments on myself using a simple glucometer and some test strips. The experiments revealed that in order to reduce the insulin response to carbohydrates, I had to eat the carbs with protein and/or fiber.

Later, I figured out that eating these two macronutrients together wasn't enough; I had to eat protein or fiber (or even fat) before I ate carbs.

Serendipitously, I stumbled on some recent research where scientists took that premise and ran with it. They not only confirmed that you have to eat carbs last in a meal to modulate the insulin response, but they figured out exactly how much time should elapse before eating carbs after protein and how large the insulin modulating effect was.

They also proved that like protein (and probably fat), fibrous vegetables are an equally effective "nuclear control rod," as they too mitigate the insulin response to carbs.

The research group, led by Alpanna Shukla, rounded up 16 subjects with type II diabetes. All 16 consumed isocaloric meals of the same macronutrient composition on three separate days, one week apart, after a 12-hour fast. The three meals were based on the following conditions:

All study participants had blood drawn just before mealtime and at 30-minute intervals up to 3 hours after the start of the meal.

Eating carbs last slowed down the insulin response as effectively as acarbose and nateglinide, two commonly used blood-sugar drugs. The 30-minute glucose peaks were 53.8% and 40.4% lower for the carbs-last meal than the carbs-first meal and the sandwich meal, respectively.

The researchers figured that reduced insulin response had to do with "delayed gastric emptying." More precisely, the fiber in the vegetables was acting like the "nuclear reaction control rods" in my opening analogy.

Getting your body to use insulin more efficiently, or, as was the case in this study, getting insulin levels to be reduced (and regulated), is maybe the most important thing involved in getting lean and staying lean. And while this study involved diabetics, the principles are almost certainly the same for non-diabetics, too.

Luckily, the strategy proposed in this tip is incredibly easy to adopt. Don't be daunted by the 10-minute "rest intervals" that were part of the study protocol, though, because you can employ the same strategy without actually putting your fork down.

Let's take a typical healthy meal of carbs, protein and veggies: maybe a sweet potato, a chicken breast, and some steamed broccoli. Rather than adopting the usual strategy of taking a bite of this, a bite of that, and then a bite of something else, just start your meal with the broccoli or whatever fibrous vegetable is sitting on your plate.

Eat it slowly, as you should anyhow. Chomp on it. Eat it all. Then move onto your chicken breast, again eating it slowly and leisurely until you've finished it.

After both of the first two courses have been eaten, tackle the sweet potato with the assurance that this high-carb vegetable isn't going to cause a big release of insulin and sabotage your efforts to stay lean.

What could be simpler? 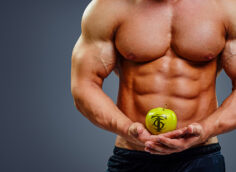 Every list of the healthiest foods you've ever read is based on incomplete data or plagued by biases. This one considers everything.
Diet Strategy, Feeding the Ideal Body
TC Luoma February 8