You don't have to be a competitive bodybuilder to get lean and build muscle. But there's a lot the average lifter can learn from physique-style competitors. Here's one thing.

There's No Scale on the Stage, or the Street

Your weight is literally the amount of gravitational force your body has on the earth. Nobody sees that number or cares about it. You shouldn't either. People see your actual body, which can appear leaner and tighter with the addition of muscle. Seasoned competitors know this.

They celebrate tiny improvements in their performance, appearance, and habitual behavior. They enjoy the grind because of the results they get little by little in the mirror, and they trust that the right behaviors will give them the body they want eventually. So the number on the scale never derails their efforts. And it shouldn't. There's no scale on stage, and if there were, it wouldn't even matter.

Aesthetically pleasing bodies often have a surprisingly heavy scale weight. Those bodies are covered in muscle. Seasoned competitors know this, and don't use the scale as a barometer for success. The number on the scale depends on a whole host of other things going on in the body, not just fat loss. Muscle cells, for instance, can shrink and expand with glycogen and glycogen depletion, and the body can hang onto extra water or even poop – yeah, I said it. Constipation will make you a lot heavier. That's why competitors don't freak out or get discouraged when the scale doesn't say what they want it to.

Most people don't have the ability to see beyond the scale. They're so fixated on the RESULTS of working out and eating well that they don't make working out and eating well the goal itself. Big mistake. And this fixation usually boils down to wanting to weigh less at any cost... even if it's temporary. But if training regularly and eating sensibly became habitual, progress would be easily maintained, scale weight would stabilize, and there'd be no yo-yo dieters.

Striving solely for a number on the scale blinds people from seeing all the progress they're making. It blinds them from enjoying that progress, and it often discourages them from continuing.

Many regular folks would be happy losing 10 pounds of "weight" and seeing the scale go down. But a physique style competitor would not be fooled so easily. He or she would want to know what that weight was made of: glycogen, fat, water? And muscle loss would not be acceptable.

Building muscle though constant nourishment and weight training is the best thing you could do for your body. But it'll never be pleasurable if your only reason for doing it is achieving lower weight. When you intentionally build muscle you sacrifice fast weight loss for higher metabolism and the kind of look you can only get from having muscle.

People who fixate on weight loss often will lose weight, but without maintaining or building muscle they'll lower their metabolism, then gradually gain that weight back, and finally end up with a higher number on the scale, less muscle tissue than they had to begin with, and a squishy, weak body.

Realize that your weight depends on a whole host of other things going on in your body. Don't freak out or get discouraged when the scale doesn't say exactly what you want it to. 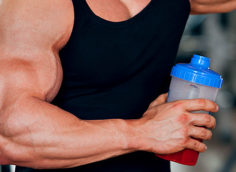