The 2010 Affordable Care Act required chain restaurants with 20 or more locations to list calories on their menus and menu boards. There was a lot of debate about whether this would actually encourage overweight people to eat less.

Several studies were conducted, and many of them showed that, well, people are going to eat what they want... even if they can clearly see that the calories in their Bloomin' Onion at Outback Steakhouse (over 3000) would sustain a small village in Africa.

But a few of these studies did show that some people will take note of those calorie counts, at least those people who already give a shit about nutrition. The FDA says the average person will reduce his daily intake by 30-40 calories if he can see the calories listed at restaurants. Yeah, not that encouraging really, but it might help sedentary people over time.

Now we have a study that digs a little deeper into this debate by looking at brain activity. The findings might also help you the next time you're trying to rediscover those lower abs. 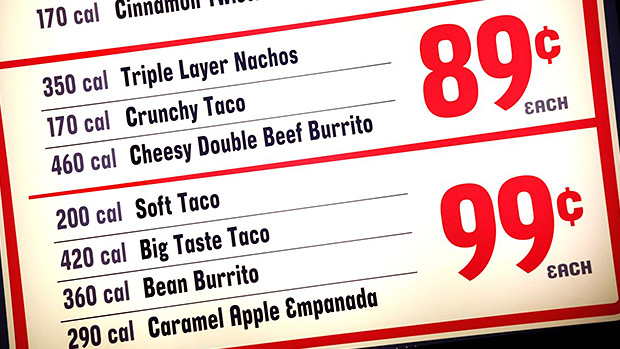 Researchers showed college students hundreds of food photos, most of them fast foods and desserts. About half of the students were actively dieting for fat loss at the time. Some of these images were accompanied by the calorie count of the food; some were not.

The subjects were asked how much they wanted to eat each food item and rate that desire on a scale from 1 to 4 with one being "do not want" and four being "put that in me now!"

They rated these food pics while they were in a functional magnetic resonance imaging scanner (fMRI), which shows brain activity.

All the subjects rated the calorie-labeled foods as less appetizing, especially the dieters.

But now things get more interesting (as if you weren't mesmerized already). When researchers looked at the fMRI data, they found that the two areas of the brain which motivate eating behavior showed decreased activation when the students could see the calories.

The dieters, by the way, showed some decreased activation already, so it was the non-dieters who were really affected by the calorie counts.

This was the first study to look at how your brain makes food choices when calorie info is presented. And it looks like those calorie counts on menus could make a difference: knowing the calories makes the food less appealing.

If you're tempted to skip the grilled chicken and order the Gordo Americano Burrito Fiesta instead, maybe take a gander at the calorie count. It could help nudge you back over to the "lite" side of the menu.

On a related note, this could be part of the reason why keeping a food log works so well: you're forced to count every calorie that finds its way into your mouth. It creates awareness and mindfulness.

That's why people who keep food logs or track their calories with an app have been shown in other studies to get leaner, even if they aren't actively trying to uncover their six-packs.

Diet is the hardest piece of the puzzle for most lifters and athletes. But these tips will lighten the load. Here's how to eat better with ease.
Diet Strategy, Feeding the Ideal Body, Nutrition & Supplements, Plazma, Protein
T Nation February 21

Got about 7 minutes? Do this before you eat.
Diet Strategy, Losing Fat, Nutrition & Supplements, Tips
Christian Thibaudeau April 30
As kids, we all looked at superheroes with a sense of awe – not just for their heroic acts of fending off the bad guys, but also for their seemingly flawless muscular bodies. In fact, I know of more than one guy who started working out in order to emulate their favourite superhero.
Feeding the Ideal Body, Nutrition & Supplements
Dave Barr November 22