I’ve been writing for years about the wisdom of adding a little fat to your protein and carb meals to lessen the obesogenic (fat promoting) effects of a meal. I’ve likened it to the control rods used to control the rate of fission in a nuclear reactor.

But now, thanks to some Japanese researchers, we know of a better way to counteract the fat-promoting effects of a meal while simultaneously causing an increase of incretin levels – hormones that cause a release of insulin.

Okay, so the American version of this study would likely involve some form of potatoes, steak, and butter instead of rice, tofu, and mayonnaise (?), but try to look past your Western biases, you food elitist, you.

The researchers tracked the participants’ plasma glucose, GIP and GLP-1 (incretins), and serum insulin concentrations to the weird foods for a 3-hour, post-meal period. 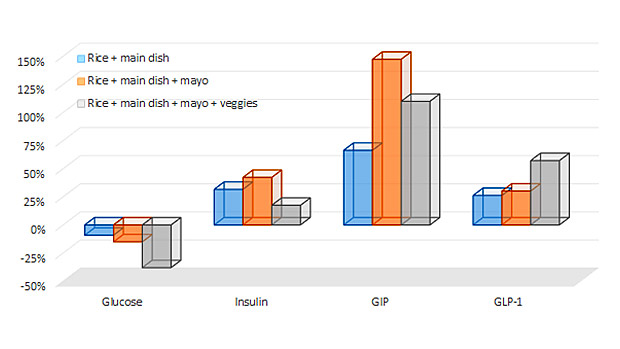 So the meal that combined carbs, protein, fat, and vegetables led to low blood levels of glucose and insulin. That’s good (for practically any time other than immediately after a workout).

In general, it meant glucose in the blood was kept at manageable levels so that the brain and muscles get a steady supply. The alternative condition – high levels of glucose and insulin – would cause a cascade of biochemical processes, none of which are of much help in keeping you svelte enough to slip through doorways without having to strip down and coat yourself with Crisco.

While the carb, protein, fat, and vegetable meal lowered blood sugar and insulin levels, it also led to an increase in the hormones GIP and GLP-1. That’s also good.

GIP, while being intimately involved in the regulation of blood glucose, also seems to play a role in regulating body weight. GLP-1 may even be a more potent player in the fight against obesity in that it increases muscle uptake of glucose, decreases the speed that food is digested, and decreases the appetite, all generally leading to pretty impressive decreases in body weight (in theory and also when tested in Type 2 diabetics).

Now it’s true that fat people have high GLP-1 pretty much all the time and it’s usually a sign of high carb intake. What you want, though, is regulated and episodic rises in GLP-1 – that’s a pattern that leads to health and slimness.

All of this suggests that it’d be a good idea to have a big bowl of vegetables (it doesn’t have to be boiled spinach and broccoli) with every meal, or as many meals as is practical or palatable, so that you can put GLP-1 and GIP to work for you.