Is Your Thyroid Happy?

When the thyroid is happy and functioning normally, it determines how your body uses energy (i.e., controls your metabolism), makes proteins affecting growth and development, plays a part in glucose consumption, helps regulate levels of blood lipids, and even controls body temperature.

When you're not giving it what it needs – when it's not happy and functioning normally – it can cause fatigue and rampant weight gain, along with a host of problems including cancer.

It's highly likely that you might have an unhappy thyroid, and if you do, it's pathetic because the problem is oh-so-easy to remedy.

Despite its importance, dietary intake of iodine has decreased by about 50% from 1971 to 2001, the latest dates for which I could find research. Why did that happen? Several reasons.

For one, the other main source of dietary iodine (other than iodized salt) used to be wheat flour, as iodine was used in its processing. However, much of wheat is now processed with bromide, a chemical cousin of iodine. But bromide doesn't function like iodine in the thyroid. What's more, it actually blocks iodine's activity. (Add to that the trend of food-phobics fearing all things gluten and you can pretty much scratch bread off as a source of iodine.)

Other chemicals block iodine, too, among them chlorine and fluoride, found in drinking water. Another chemical, perchlorate, which is found in ground water and food supplies (it's even used as a flavor enhancer in certain foods), also interferes with iodine absorption.

Most people used to get their iodine from iodized table salt, which was formulated expressively for the purpose of supplying iodine to consumers who found it hard to obtain seafood. But there's a problem with iodized salt. A 2008 study found that of 88 samples of iodized table salt, less than half contained sufficient amounts to thwart off iodine deficiencies.

And then came the doctors. They first advised heart patients to restrict their salt intake, and then in a classic case of what must be good for the goose with congestive heart failure must be good for the gander with a healthy ticker, they told everyone to cut down on salt. People took heed of their warnings and the saltshaker and its iodine stayed in cupboards and gradually turned into crystallized blocks that could have been mistaken for Lot's wife.

Then there's the exercise factor – men and women who exercise a lot excrete precious iodine through their sweat.

What you're left with is a society where, by some estimates, 74% of its adults are deficient in this vital mineral. You're also seeing a concomitant rise in benign (and malignant) thyroid growths and nodules, just like in the old days before iodized salt hit the market.

Many of you no doubt think that you're not included in this dire statistic. You think you're fine because you don't restrict your salt intake at all; you eat out at restaurants, eat canned foods without so much as considering the salt content, and you even eat Cheetos.

Well guess again, my orange-fingered friend, processed foods don't generally use iodized salt. Neither do restaurants. And that pinkish Himalayan salt that some Whole Foods employee in Birkenstocks told you to use? It's piss-poor in iodine. So is sea salt because a lot of the iodine is lost during crystallization.

What you need to do to make sure you don't become deficient is take a daily iodine supplement. Capsules or tablets of at least 150 micrograms, taken daily, should be enough to maintain healthful levels. At a minimum, start using a reputable iodized table salt, like Morton's, to spice up your food. 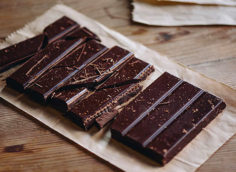 Eating the right kind of chocolate bars can improve your health in a number of ways. It can even build muscle. Here's what you need to know.
Nutrition & Supplements, Super Health
TC Luoma December 15