People who follow the paleo diet avoid grains. They feel that modern grains contain three "poisons" that, in general, are pro-inflammatory. These three alleged poisons are phytates, gluten, and lectins.

Granted, these components of grain are conditionally problematic in certain circumstances, but a new study shows that a diet heavy in grains is actually anti-inflammatory. But let me put it in paleo language to make sure there's no misunderstanding: Cave bear baaaad. Whole grains goooood.

Danish scientists recruited 50 overweight people and divided them randomly into two groups. One group consumed a whole grain diet (consisting of 179+/-50 grams a day of wheat, rye, barley, oats, brown and red rice, millet, and dried corn) for 8 weeks. They then went back to their traditional diet for 6 weeks, after which they followed a diet of refined grains (13+/- grams a day) for another 8 weeks. The second group of subjects completed the study in reverse order.

The whole grain diet led to a decrease in body weight (fat), along with a reduction in serum inflammatory markers, including interleukin-6 (IL-6) and C-reactive protein. The reduction in IL-6, in particular, was directly associated with intake of rye. Perhaps surprisingly, DNA sequencing of participant's stool samples failed to detect any changes to the composition of their gut bacteria.

Researchers sympathetic to the paleo viewpoint contend that a lot of digestive and inflammatory illnesses correlate directly with the intake of modern grain, particularly wheat. This study, at least, shows that it ain't so.

Furthermore, eating whole grains can provide you with a long list of beneficial phytochemicals that nurture your health and thwart disease. A diet that includes whole grains can also lead to a loss of body fat, presumably because they fill you up and forestall hunger. 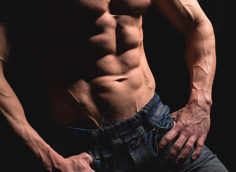