For years people have been wary of eating saturated fat because they were told it would start to cake onto the insides of their plumbing and make their hearts decide it was time to take them to that better place everyone’s always talking about.

But according to a huge new study out of Canada, it’s low-fat diets – even just diets low in saturated fat – that are more likely to kill us. The study had another surprise for traditional dietitians, too. It showed that high-carb diets tend to send us to earlier graves, too.

A huge international team of researchers conducted a cohort study of 135,335 individuals between the ages of 35 and 70 in 18 countries. Their dietary intake was recorded using validated food frequency questionnaires with a median follow-up of 7.4 years.

The scientists assessed the associations between consumption of carbs, total fat, and each specific type of fat with cardiovascular disease and mortality from all causes.

Contrary to all popular notions about cardiovascular health, it turned out that those who cut back on fats died sooner than those who ate butter, cheese, and meats.

Those who ate the most carbohydrates – particularly refined sugars found in sodas and processed meat – also increased their chances of kicking the Spam bucket earlier by close to 28%.

A second helping of Aunt Doris’ lard loaf, that’s what this means to you. Okay, maybe not. All things in moderation still applies.

While the Canadian researchers didn’t go so far as to make specific recommendations on fatty acid intake, the following pie chart is a pretty good approximation of how much MUFA, PUFA, and SFA you should be eating. (Keep in mind that the PUFA category contains both omega-6 fatty acids and omega-3 fatty acids.) 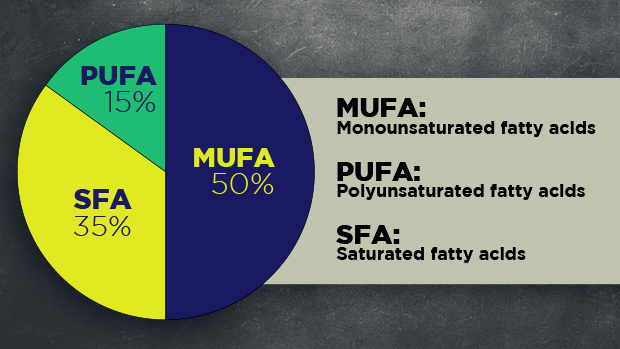 As far as macronutrients, the old Barry Sears “Zone Diet” recommendations of 40/30/30 (40% of calories from carbs, 30% from protein, and 30% from fat) is probably pretty close to the mark.