In practical terms, losing fat is mainly a battle against hunger and will. If your belly feels full, you can more easily muster up the willpower to push away the plate or snub all the goodies in the pantry or fridge.

So it stands to reason that anything you can do to increase satiety, or fullness, is going to help you lose blubber more quickly. One way to increase fullness involves adding plain old air to your protein drinks.

Deep in the archives of the American Journal of Nutrition lies a study where researchers tested whether blending protein shakes for varying times had an effect on the satiety of test subjects.

Twenty-eight men consumed breakfast, lunch, and dinner in a laboratory one day a week for four weeks. On three of the days, subjects received a 499-calorie shake 30 minutes before lunch.

The shakes, however, varied in volume. Some were 300 mL, some were 450 mL, and some were 600 mL. The changes in volume were accomplished simply by blending the shakes longer – letting the blades of the blender gulp in more air and pump up the shakes.

The men who drank the 600 mL shakes ate 12% fewer calories in the subsequent meal. They also reported feeling more full and a greater overall reduction in hunger. The 450 mL shakes had the same effect, but not to the degree of the 600 mL shakes.

To try it out, simply let your blender whip up your protein shake for 15 to 20 seconds longer until you notice the volume rise. If you're using a stick-style hand blender, blend your shake with a portion of the blades above the liquid to increase aeration.

Whether you drink one, two, or three shakes a day, pumping them up with air and increasing your satiety can cause you to leave a considerable amount of calories on the table, making fat loss all the more rapid.

Simple, time-tested, no nonsense habits that you need to get into when designing a good eating program. Check ‘em out.
Diet Strategy, Feeding the Ideal Body, Nutrition & Supplements
John Berardi, PhD December 19 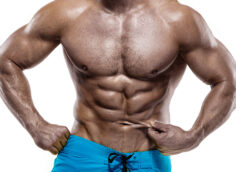 If you've tried to get ripped and failed, you're not alone! One of these 7 things likely tripped you up. Here's what to do about it.
Losing Fat
Gareth Sapstead December 21