How many of you have sat impatiently through a series of online "Help" files after running into difficulty with a software program? They usually make me want to tear my hair out (okay, so I'm a cue ball but you get the point). The dead ends are the worst. You know:

Still, though, sometimes they work in a forehead-slapping kind of way. "D'oh! Why didn't I check to make sure that everything was plugged in?" The answer may even be obvious and we just need a step-wise process to uncover the underlying issue. By clicking one of the two or more choices in response to a question, we can be steered toward a solution.

If you've had trouble gaining lean weight during mass building phases, here's something that might help. It's a proposed "algorithm" – the same simple "if-then" type of approach used by your software troubleshooters. The facts are simple and obvious to some but ultimately they remain consecutive truths (or at least advice) from which we can all benefit. If you're not achieving the short- to mid-term results you desire, you're straying from the algorithm in some way. 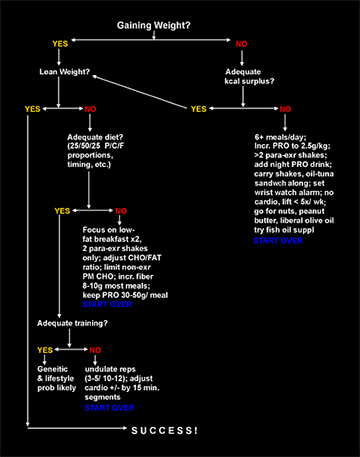 The algorithm is designed to continually restart you through the self assessment process until you're happily moving downward along the extreme left side toward... SUCCESS!

Let's try an example. Johnny Atrophy has been unable to gain weight and is frustrated as to why. He answers "NO" to the kcal surplus question and thus starts focusing on drinking calories (a literature-supported way to get into positive kcal balance) and consuming healthier fats (for caloric density and other benefits).

He slams weight gainer shakes, devours oil-packed tuna and/or natural peanut butter sandwiches (on whole wheat) that he carries to work/school, eats handfuls of walnuts, moderately lean burger and salmon (at home), etc. – all to the tune of his wrist watch alarm. The watch notifies him that two hours have passed and it's time to eat again. Hunger will not be his dietary guide; the alarm will. He becomes cognizant of minimizing the eight-hour fast of nightly sleep and consumes a casein based shake or solid protein (meat) snack at bedtime or even upon waking to pee in the early AM hours.

He particularly focuses on getting in a whey/casein shake with added maltodextrin or similar carbohydrate in the hour preceding and following the gym. While he's lifting, he also drinks a sports drink for good measure (and a little stress response suppression). He's not about to worry much about fat-plus-carb combinations at this point; he's out to get something he's never achieved before: MASS.

After a month of this, he starts the algorithm over. He has indeed achieved a kcal surplus for his concentrated efforts and thus necessarily shifts to the left side of the figure. Ultimately enough kcal surplus will ensure weight gain of some type... ahh, progress!

Alas, though, Johnny is not gaining primarily lean weight. He shouldn't be hyper-critical if he gains less than 100% muscle, because a weight gain consisting of just muscle isn't probable. Still, his ratio of weight gain is poorer than 60% lean, so he could use adjustments. Again he consults the algorithm. Upon checking his macronutrient ratio, he notices that it could be the added maltodextrin and olive (or canola) oil in his shakes. There are nearly 100 g of carbohydrate and 30 g of fat in each. He decides to drop the fat from his two para-workout shakes and go with solid food the rest of the day.

After four more weeks, he's still addng fat. He decides that his diet isn't the problem, so rather than trim his para-workout carbs or his evening fats, he moves on to the training portion of the algorithm. He's already trying undulating periodization (alternating low-rep strength days and higher-rep volume days), so that seems okay.

That leaves "cardio." He thus decides to add 15 minutes of non-panting aerobic activity after his weight training. At four workouts per week, that's just an hour (about 350 kcal) of cardio – a subtle nudge that's not likely to compromise size gains.

No dice. He's still feeling fatter. He decides to hold everything steady for another month while upping the treadmill to 30 minutes after each workout. That's now two hours of treadmill work (about 700 kcal spent) weekly. Voila! He's feeling leaner but still growing in size and strength. A month later his body composition assessments corroborate this.

You see how it works.

The only dead end on the algorithm is the genetic/ lifestyle trap. This too, however, has an "out." It can be addressed in a variety of ways beyond the scope of this article. There's meditation to reduce stress from work, love life, or Type A tendencies. There are supplements, psycho-biological techniques, and further dietary strategies to nudge hormones in a positive direction. There are ways to address various intolerances (e.g. Intolerable I and II, avoidance of offending foods, use of medications, etc.). And there's also the reduction (or cessation) of partying for those who indulge in this potential lifestyle flaw.

The discussion of these genetic/ lifestyle factors isn't just foo-foo talk – or worse, an excuse – for non-gainers who think they're eating and training properly. We must address endocrine factors (Testosterone, cortisol, catecholamines, insulin, growth hormone, etc.), other inherited traits, and a host of environmental factors unrelated to training or eating (again: work stress, alcohol, vices, poor sleep habits, girlfriend/ wife, etc.) - but the algorithm does handle the fundamentals.

If you feel stagnated, have hit a dreaded progress plateau, have never had much success changing your body weight or simply need a reminder, herein lies your wake up call. There's a ton of information on T-mag regarding every problem we've addressed, and you can access it all for free, so there's no excuse. Time to get back on track.