Editor's note: We recently read yet another article about the attributes of a vegetarian diet. This particular article, in The Bottom Line Health newsletter, boldly proclaimed that vegetarian diets are the healthiest diets and following one will make you live longer than meat eaters. While there's very little conclusive data to support those notions, author Neal Barnard, a physician and founder of the Physicians Committee for Responsible Medicine, had no apparent qualms in making such claims.

While he did cite some research to support his claims, even the most scientifically illiterate reader could find problems with the following:

"Studies of Seventh-day Adventists–people who don't smoke, use alcohol or eat meat and who exercise regularly–have shown that a vegetarian diet (excluding their other healthful lifestyle practices) allows them to live about 10 years longer than nonvegetarians."

Forgive us Dr. Barnard, but how is it that you were able to isolate that particular lifestyle aspect (not eating meat) and conclude that it was the sole reason for their longer life spans?

Excuse us, we have to sneeze: Bulllshittt!

As further supportive evidence of his pro-vegetarian stance, he makes statements like "Meat is also devoid of key nutrients, such as fiber and vitamin C."

Of course it is, but no meat eater, however fervent in his flesh-rendering ways, is stupid enough to suggest that meat and only meat should be eaten!

We asked Lonnie "Warrior Nerd" Lowery to counter some of Dr. Barnard's arguments. You might want to commit a few to memory for the next time you're attacked by some pasty-faced chick who's got a celery stalk up her ass regarding your meat-eating ways.

"We tend not to be especially critical when presented with evidence that seems to confirm our prejudices."

In response to yet another "shame on carnivores" stirring, this time about lifespan, I think we need to be wary of belief-tainted promulgation. New data that are convenient and satisfying to some folks' personal biases need counter evidence to create a balanced perspective. (Even scientists and health educators, you see, are human and we have opinions that can interfere with conclusions.) Toward this end, let's examine some anthropological and physiological facts. Debate them as you will, but they are indeed food for argument...er, thought.

First, many anthropologists have concluded from the fossil record that:

A. Some of our earliest ancestors, Australopithecines, evolved larger brains and smaller guts due to the presence of meat in their diet. Take a good look at a gorilla's bell-shaped rib cage; all those meters of gastrointestinal tract are needed to process copious amounts of relatively low-nutrient vegetable matter. That leaves them grazing and nibbling for at least a third of their day. Now look at a modern human skeleton: big brain, comparatively narrow ribs and a shorter intestine. By eating heavily nutritious meat we can leave the grazing to the meek herbivores. All those calories and nutrients already stored in their meat can be spent on building a larger, demanding humanoid brain. i.e. there is no longer need for a huge gut structure (no puns, please). Sure ancient societies took time to hunt, but that too appears to have sharpened our intellects, cooperation, and society.

B. Later in the fossil record, evidence from Homo Heidelbergensis (e.g. Altamura Man, whom we'll call "HH") clearly shows that not only did they have stone axes with which to hunt, slices in animal bones (ancient rhinos, "steer", etc.) reveal these guys were also butchers. Even their appendicular skeletons were growing larger and more robust like a hunter's. Let's think about that one. Upon leaving warm Africa with its year-round vegetation, HH needed to survive and spread somehow across colder seasonal Europe. That weeded-out the dimwits and grazers right there. Plants are gone in winter but however challenging, animals may still remain as food. The reciprocal effect of eating nutrient-loaded meat and cooperating in ever-more complex hunting and social communities to survive appear to have laid the groundwork for modern society.

C. And what about side effects of big brains? At a size 25-30% larger than that of earlier Homo Erectus, HH and modern humans don't have certain dentition descend until about age six. That creates "eating immaturity" and longer dependence on parents. This ultimately results in more learning and stronger family and communal bonds. Even language can grow more complex with that big meat-driven brain and extra lessons from old mum. Okay, maybe meat eating isn't so barbaric, eh?

And since I'm no anthropologist, let's look at some supportive physiology:

3. We possess incisors and canines–them ain't for grinding grass, folks.

4. Again, we have that narrow rib cage and modern waistline–which is even considered sexually attractive (the attractiveness of a slim waist itself [whether skeletal or soft tissue] may suggest biological fitness to a human mate).

5. Our abundance of brain tissue is extremely metabolically demanding (consider blood flow, nutrient delivery, redundant systems to support it, etc.) – so much so that meat appears to have been instrumental in allowing its development.

Now, none of this is to say that fruits and vegetables are bad (duh). Paleo-diet studies are pretty supportive of ongoing plant intake. Isotopic skeletal and hair data are revealing ever more. We know that plant material has indeed been common in the diet throughout recent (agricultural) history–even if its presence may be a default choice due to relative scarcity of meat at times.

Heck, for chronic disease prevention, Americans could use a good doubling or more of their fruit and veggie intake. References aside, about half of us get none on a given day. Man should not live by meat alone. I'm not claiming that a meaty diet can't become heinously unhealthy, but the same can be said for a meatless one. (Ever know one of those "vegetarians" who eat no actual vegetables but condemn you as they swill cheese puffs?)

Still, there are those who are willing and capable enough to healthfully plan around a lack of meat. However unnatural, a few can even educate themselves to the point of succeeding with strict veganism (even eschewing milk and eggs). Perhaps they'll even live 2-4 years longer due to calorie reduction and certain phytochemical abundances, at least when compared to poor saps eating a typical, lousy Western diet. Although such data are correlational and therefore show no cause-and-effect (i.e. lots of lifestyle factors confound the data), they do suggest certain benefits along with their risks.

And lastly, even the global ecosystem would be more efficient with a reduction of overall meat consumption.

But why pretend we're not omnivorous by design? Let's not ignore all those anatomical and physiological features that suggest the "natural-ness" of meat consumption by predatory humans. Let's not glance over the fact that animals eating animals is a necessary part of the food chain (think about removing a single predator species and see what you eventually get). Let's not forget quality of life from a bodybuilder's point of view; a longer existence isn't appealing to everyone if it means being smaller or anemic or even frustrated. If I were a vegan, just knowing that I was missing out on certain zoochemicals (e.g. creatine, CLA, carnosine, EPA and DHA, B12, etc.) and a rich source of other nutrients (vitamins, minerals, high quality proteins) would bother me personally. I want to do all I can to get and keep a powerful physique.

So let's not forget the contribution of animal products to our specific physique goals as well as to human evolution and modern society. The fossil record and human anatomy (the latter of which I have taught at the collegiate level) supply compelling and sometimes independent evidence that meat is good.

As bodybuilders leaning toward the "hunter" rather than the (however long-lived) "grazer" part of the human spectrum, let's repeat that last phrase. 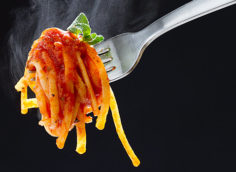