If that’s your first question when you look at a meal plan, then you’re not ready to start a diet. Yet in the bodybuilding and physique world, cheat meals are just expected. Sometimes demanded. You’d be hard-pressed to find a coach or diet expert giving out meal plans that doesn’t get this question from clients.

But the truth is, losing fat and building or retaining muscle doesn’t actually require a cheat day or a weekly meal of junk food. But if you’re a newb you probably think that no nutrition plan is complete without one.

Cheat meals and refeeds have become a rite of passage for clean eaters, lifters preparing for competition, and even casual dieters. It’s a celebrated ritual that you’ll see all over social media on a weekly basis. Hey, I do it too. No shame there.

So What’s the Problem?

The problem is the sense of entitlement dieters seem to have even when one of these meals isn’t warranted. The conversation will go something like this:

“I was looking through the diet you outlined for me and noticed there’s no cheat meal. Either there’s a mistake or you aren’t the expert you claim to be. Is there a refund option?”

Unless you’re in contest shape, or just adhering to a lower carb diet where you need to replenish glycogen stores periodically, you can actually set up a hypocaloric diet that allows fat loss without ever needing a cheat meal. At least, not for a while.

Then there’s the refeed, which is used for a different reason than the cheat meal. So let’s clear it all up and figure out who needs what.

Refeeds and Cheat Meals: The Difference

They’re not the same, though the benefits can overlap. Here are the defining characteristics:

A refeed is often used when someone has been dieting for quite some time and has lowered their calories (mainly from carbs) to a degree that glycogen stores have become very depleted and need to be replenished. Refeeds are used even during competition dieting, oftentimes even within the last few weeks before a physique show, all depending on the competitor, how well they tolerate carbs, or the rate at which they can convert carbs into glucose.

They’re best used as a tool for when a physique-style competitor has gotten “flat” and needs to fill back out. It also serves as a means of muscle preservation because once the body has become severely depleted of glycogen, it will start robbing Peter to pay Paul (convert non-carbohydrate substrates, like amino acids, into glucose through a process called gluconeogenesis). A refeed is usually “cleaner” than an all-out cheat meal.

Though they’re used for different purposes, a cheat meal can give you the same benefits that a refeed does. That is, to replenish depleted glycogen stores and increase leptin (the hormone that decreases your appetite). They can also be beneficial psychologically for someone who’s been dieting very strictly and been in a hypocaloric state for an extended period.

So a cheat meal is planned because it’s been earned through adherence to a diet for a specific period of time. A refeed may be required because you’re severely glycogen depleted and leptin levels have dropped. But neither are truly required until the physiological issues become a roadblock in fat loss. And neither are required while there’s still a lot of fat to be lost.

When your calories have been restricted, your leptin levels will drop, and your metabolism will slow in order to adjust to being able to manage the calorie deficit. This is why a lot of people who diet strictly for extended periods can stop seeing progress. The body will make adjustments in metabolic function and hold on to fat so that you die at a slower rate. It’s a protective mechanism.

Dieting really hard for a significant amount of time is also a stress, which can raise cortisol levels. When cortisol is elevated, fat loss becomes more difficult as well. A mental break enjoying a cheat meal can also help to reduce cortisol.

So in a way, the cheat or refeed does serve a physiological purpose to help increase fat burning by reducing diet stress a bit, telling the body it’s not in starvation mode anymore, and increasing leptin. They “remind” your metabolism to get back in the game and start performing at an efficient rate again. 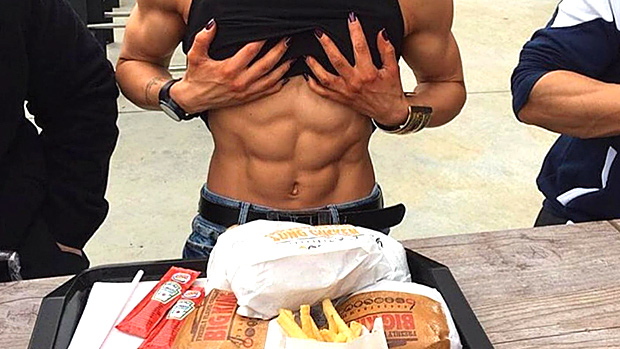 But They’re Not Necessary for Everyone

Both cheat meals and refeeds are for people who’ve been in a caloric deficit for an extended period, and usually have lost a significant amount of body fat. Some people think five or six days of dieting requires a cheat meal. It does not. You could go months and months in a caloric deficit and never actually need to cheat.

How Do I Know If I Need One?

The longer you adhere to a plan that puts you in a caloric deficit, the more likely a refeed or cheat meal is necessary for success. If you’re a male above 15 percent body fat, then you’ve still got plenty of good ol’ blubber to peel off before any of these physiological issues will manifest.

The leaner you get, and I’m talking sub-10 percent body fat here, the more likely you’ll need to implement cheats or refeeds. Leaner people also tend to be more insulin sensitive, and their bodies are better at nutrient partitioning– extra calories are shuttled into the muscle cells and used rather than just packed into more layers of fat.

Ask yourself this: Am I lean enough to need a cheat or refeed? Some people can get their body fat tested and decide what to do. But there’s a simpler way to go about determining this.

First, get naked, stand in front of a mirror, and jump up and down. Is there a lot of jiggling going on?

Once you’ve reached a point of being satisfied with your fat loss and want to make a cheat meal part of your weekly schedule, then do so. For those who’ve gotten the jiggle rate down to nearly nothing, you’ve probably already figured out when a refeed or cheat serves you best. And the leaner you get, it’s likely that quality refeeds can and should be done a little more often.

You can make your gluttonous behavior more effective by planning it around hard training sessions, like a big leg or back workout. Those are the largest areas of the body and thus will use the greatest amount of glycogen during the workout. But you probably don’t need 3000 grams of carbs in a post-training refeed after a few sets of barbell curls, even if you’re negative 13 percent body fat.

Training turns on the glucose transporter, GLUT4, so you’re in a primed state to store those carbohydrates in the muscle cell, rather than having insulin store them as excess body fat. But again, that’s if you’re in a state of being insulin sensitive enough to take advantage of this. A high jiggle rate means you’re probably not going to get the same benefit.

If glycogen needs to be replenished during a refeed, then choose foods that are low in fat and composed of high glycemic carb sources, with a moderate amount of protein. Sushi is a good go-to here, but without any of the fried foods it can include in it. You could also go with pasta and a moderate amount of protein, or a small steak with a couple of baked potatoes and low-fat sour cream.

What About The Calories?

One of the built-in benefits is the mental break you get from counting macros and calories. I’m not saying to throw nutritional mindfulness completely out the window, but trying calculate all the macros in a refeed or cheat only adds to the mental stress of dieting. Sitting there worrying about ounces or portion sizes diminishes the enjoyment of the break you’ve earned.

There’s a balance. Not counting it up doesn’t mean you should clean out the all-you-can-eat buffet until they force you out the door. That would leave you with mental stress too. The cheat or refeed should leave you saying, “That’s what I needed” and not “Where’s the highest bridge I can throw myself off?”

Remember, it’s a cheat meal, not day. A cheat meal or a refeed meal isn’t supposed to last all day, or even the entirety of the football game you’re watching.

Try to find a place where you can relax and enjoy what you’ve earned without feeling guilty about it later. Limiting it to a meal will help with this. Avoid guilt because it defeats the purpose of the stress reduction that comes with taking a break from the diet. 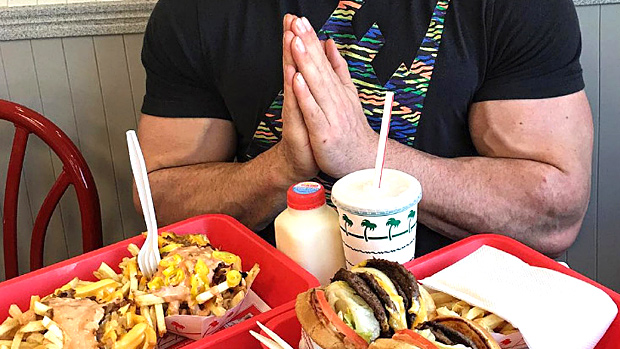 Don’t Let It Derail You

Women tend to have a harder time getting back to being strict on their diet after they cheat. Once they cheat, especially if it was an unplanned cheat, they can become overemotional and jump to the conclusion that they might as well just throw it all away. This is simply not the case.

They’ll ask, “What am I supposed to do now that I fell off the wagon?” Well, you get back on. Or just see it as part of the learning process. Your cheat was a vital mechanism in the wagon that you’re still on. It served its purpose, now move forward.

It’s that simple. Just go back to what had been working up to that point. That’s it. Nothing more. You don’t need to starve yourself the next day or cut calories to make up for the 79 tacos you ate the day before. You’re gonna pay for that after coffee the next morning anyway. No need to further punish yourself.