You've heard it before: "Breakfast is the most important meal of the day!" Or perhaps you've heard it stated in reference to a long night of liver depletion and fasting catabolism: "Break the fast... breakfast!"

I bet that's exactly why you eat breakfast every day. Me too. I don't want to be among the one in six who skip it if it's going to mean a small or fatty physique. (10) Some populations are even worse than one-in-six. It's been reported that a whopping 57% of inner city high school students skip breakfast, even with a free breakfast program available! Ugh! (14)

But the other day I started wondering if I was following dogma. Like any insightful T-Nationer, I said to myself, "Where's the beef?" That is, where are the hard data suggesting that breakfast does a body good? This article sums up what I found!

First the better-known stuff. We'll start with the liver.

Yes, your liver does in fact break down its carbohydrate stores (glycogen) during the night to maintain your blood sugar. It's one of the many selfless things that this multi-purpose organ does so well. Ask skeletal muscles to donate their glycogen so you can keep up your sleeping blood sugar and wake up alive. They'd laugh at you!

Okay, okay, quads and biceps don't laugh per se, but biologically speaking, they do lack the liver's responsiveness to glucagon as well as the enzyme that allows glucose release into the bloodstream (glucose-6-phosphatase). So, thank your liver today, eh?

The other well-known breakfast effect surrounds insulin. Lack of it during an eight-hour night of fasting does indeed remove important protection from catabolism (tissue breakdown). Some researchers even suggest that insulin is more anti-catabolic than anabolic, but that's another story.

We wake up, do fasted or semi-fasted "cardio," and then head for the steel-cut oatmeal and protein. The slow-acting, lower glycemic index meals gradually stimulate the pancreas and voila! Muscle growth and/or preservation.

But there's more. My searches have brought me to some very cool and somewhat surprising data on the benefits of this King of Meals. So much so that I'm an increasing believer in the fact that, outside of pre-, mid-, and post-workout nutrition, breakfast does rule.

Let's start with some standout research by a scientist with a name that's anything but: Smith. Two similar studies from this person suggest an endocrine benefit that could extend to more muscle mass and less downtime from training.

The second suggests fewer severe upper-respiratory tract infections among breakfast eaters. (12) And we can appreciate how annoying and distressing a head cold can be when it interferes with lifting well or even lifting.

Although excess coffee, a longtime breakfast partner of mine, can admittedly elevate cortisol concentrations in the blood, a nice load of oats, some fruit, egg whites, and low-fat dairy sure help to outweigh its potential detriments. (1)

And I still argue that java has its place in moderation, even if caffeine's effects on stress hormones linger beyond the workout session – not necessarily good. (7) As many of my readers may recall, I personally go with just one to two cups of half-calf as a do-able solution.

Another interesting effect of breakfast consumption appears to be its ability to result in lower daily energy (calorie) intake. (6) This result, which could be related to slightly less evening bingeing, might sound good to those of you who have an especially tough time staying away from after-dinner munchies.

That is, if there's indeed a true downward-compensation later in the day after one eats a big healthy breakfast, a key pitfall could be overcome. The effect is reportedly small, at just 100 kcal less per day, but it's nonetheless welcome to many dieters, especially considering the danger period of reduced fullness and satisfaction that hits in the evening, right when the TV is turned on and the savory treats are calling. (5)

Or perhaps, rather than a late-day satiating effect, the general increase in overall fiber intake among breakfast-eaters is what's helpful. (4) In any case, the 100 kcal reduction could add up over time.

We can look at epidemiological data on obesity and some breakfast-body weight interactions seemingly unrelated to simple energy balance. Yes, obesity has multiple causes, but it's still interesting to observe that those persons who eat breakfast are often leaner. (3, 8)

Why? Aside from the 100 kcal deficit that can be created, less body fat could be related to the muscles' optimal glucose tolerance during AM hours (leaving less for adipose tissue to grab?) or maybe it's related to lower circulating cortisol, or it could be something else. In any case, a breakfast that includes whole grain and low-fat dairy foods appears to be helpful on multiple levels. (4,8)

I should mention here that some earlier data suggested slightly larger daily kcal consumption among breakfast eaters. Although seemingly contradictory to what I've cited in the section above, the cool news remains: despite a slightly larger energy intake, subjects in this case were less likely to be overweight. (Rampersaud)

Eat a healthy breakfast and be leaner for it. I like that! Which is a decent segue...

Let's forget dieters for a moment. For those struggling to gain muscular weight and eat more, it's still wise to place a relative majority of kcal early in the day. Muscles are simply more receptive to carbs at this time, as I've often written and referenced. (Checkout my Temporal Nutrition articles for more info.)

Coupled with a reduced risk of becoming fat, as we've discussed, this is attractive. But even morning feedings are probably secondary to our valuable, lifting-induced "nutrient window." We should indeed adjust for those three to five days each week that include an evening post-workout opportunity. But that still leaves half of the week fitting this AM-nutrition type of thinking.

You may or may not have seen surveys indicating improved verbal or quantitative scores among kids who eat breakfast. Since many aspects of test performance are non-nutritional, it's no guarantee. Improved concentration is a reported benefit however, as are enhanced memory and better grades. (8, 9) But the underlying biology is sound. Feed your metabolically demanding brain and kick mental and physical fatigue to the curb!

I'd like to make a note about third-shift workers. You guys often have sleep debt, altered hormonal rhythms, and other confounding factors that make the data in this article tough to extrapolate. I mean, the term "breakfast" has a somewhat altered meaning for you, eh?

Further, if you're a nightshift worker and bodybuilder, be aware that you're in some pretty uncharted territory as far as direct science goes. I'm always interested in hearing what works and what doesn't for this uncommon population.

In conclusion, I'm glad I questioned even something as seemingly obvious as breakfast. I'm now personally more motivated than ever to set my alarm just a little earlier and get my waking (light) cardio taken care of by 7:30 so I can get in a big, clean breakfast.

For the sake of your mind and body, I hope you will be too.

10. Siega-Riz AM, Popkin BM, Carson T. Differences in food patterns at breakfast by sociodemographic characteristics among a nationally representative sample of adults in the United States. : Prev Med. 2000 May;30(5):415-24.

Despite years of anti-fat sentiment, it's becoming clear that the right kinds of fats can make you healthier, smarter, more muscular, and leaner.
Feeding the Ideal Body, Nutrition & Supplements
John Berardi, PhD May 30 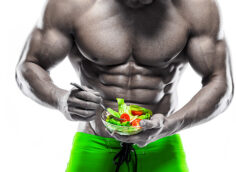 To transform your body, you'll need to avoid the three most common diet problems. Do that and almost everything else will fall into place.
Feeding the Ideal Body
Tanner Shuck October 21

Dr. Jeff Volek is one of the leading "new school" researchers in the areas of nutrition, resistance training, lipid metabolism, and endocrinology. He also knows more about low-carb dieting than just about anyone else on the planet.
Feeding the Ideal Body, Nutrition & Supplements
Greg McGlone August 2