Not too long ago, an article in one of the local bodybuilding newspapers (you know, those cheap magazines put out by lowlifes who sell overpriced, crappy supplements and then write about how well they work) discussed the dietary strategies of a local bodybuilder. Normally, I glance right over this stuff and turn to the pictures of the fitness models. As I was about to flip the page, the number 1,200 – smack dab in the middle of the article – caught my eye and made me linger a bit longer. Now get this, 1,200 was the number of grams of protein that our local "hero" was eating per day! "I feel myself get smaller if I eat less protein," he claimed.

Realizing that only a true genius could come up with this, I had to read the rest of the article. I laughed so hard as I discovered that the guy weighed only about 240 pounds and wasn't even that lean. My dream is to meet this guy so that we can run some tests and assess his kidney function. Then we'd know (at least, in his case) if high-protein diets can harm the kidneys.

If you think that our genius hero speaks the gospel, hold off before you raise any golden idols, because I'm about to take you to the Promised Land. You don't need that much protein to build muscle, my son. Become a believer of the true, Get-Big Bible and you'll be on your way to getting Samson-sized in a hurry.

If you want to get bigger (and that means lean muscle, not just weight), then you have to eat more calories than you expend. Gee, what a revelation, right? You'd think that was common knowledge, but one of the most common mistakes people make when trying to gain weight is consuming an inconsistent number of calories. They claim to eat "all of the time," but their fast metabolism somehow keeps them from gaining any weight.

Checking through many of their food intake records, one can see that they eat 4,500 calories one day and 1,500 the next. When you average it out over a week, it's obvious that they're just consuming enough calories to maintain their current weight.

There are many ways to calculate how many calories you need each day. A simple method is to multiply your weight in pounds by 16. So a 200-pound guy would need:

If he's trying to gain weight, add an additional 20% to the above calculation:

Adding 3,200 and 640 tells you how many calories (3,840) this guy should eat per day to gain weight. (Of course, your activity level determines whether these numbers need to be adjusted up or down.) You should strive to gain half a pound to one pound each week – more than that, and you're putting on too much fat weight.

Protein Needs for Guys Not on Drugs

Notice that this section specifies "guys not on drugs." People make the mistake of following a diet that Mr. Famous Bodybuilder uses under the false assumption that it'll work for them, as well. A guy who isn't taking steroids, growth hormone, or whatever other growth-promoting agent that's hot this week has very different protein needs than the same guy taking all of these agents. They are totally different situations and must be addressed separately.

Research studies on male subjects who lifted weights and didn't take any drugs clearly showed that men need more than the RDA of 0.8 grams of protein per kilogram of bodyweight (0.8 g/kg).(1,2) In one study using novice bodybuilders, 1.35 g/kg (or 0.61 grams of protein per pound of bodyweight) was just as good as 2.62 g/kg.(1) In another study, it was found that strength-trained men need more protein than their sedentary counterparts.(2) These particular researchers recommended 1.76 g/kg per day (0.8 g/pound per day) for strength-trained men.

Still, using our 200-pound guy for an example, strict use of the research means that he should take in 160 grams of protein per day. Some guys may decide that they want to take more protein because they don't want to bother with the math and will use one gram of protein per pound. I don't see a problem with this, other than the fact that it's not necessary.

Some people will assert that an excess of this magnitude will damage the kidneys of healthy humans, but there isn't much evidence to support this. In fact, research on obese people indicates that protein intake can alter kidney size but doesn't adversely affect kidney function.(3) This study, however, only investigated intakes up to 108 grams per day. It would be nice to see research done on renal function at protein intakes closer to what people are actually eating.

After calculating protein needs, your next step toward the perfect Get-Big plan is to figure out your fat and carbohydrate needs. The 200-pound bodybuilder is expected to eat 3,840 calories per day. Each gram of protein has four calories per gram, so:

If this hypothetical bodybuilder decided to take in 200 grams of protein, that would equal 800 calories per day. The total calories per day (3,840) minus the protein calories (640) gives us the amount of calories left for fat and carbohydrates (3,200).

While somewhat debatable, most researchers also favor a diet containing less than 30% of the calories from fat, with an emphasis on monounsaturated fatty acids and omega-3 fatty acids like those found in fish.(4-8) Research is pretty clear, though, that the long-term consumption of fruits and vegetables is associated with improved health and lower risks for a variety of diseases.(4-8) These facts are important because they help us to set up a diet that's not only functional in our quest to get big, but also one that will reduce our risk for disease years from now.

So, if we choose to set dietary fat at 25% of calories with the understanding that we'll also choose foods higher in certain healthy fatty acids, this yields:

Because one gram of fat has nine calories, the 200-pound bodybuilder will eat 107 grams of fat each day.

Now, determine carbohydrate intake by subtracting the protein calories (640) and the fat calories (960) from the total amount (3,840), and you have 2,240 calories left over for carbohydrates. Since carbohydrates have four calories per gram, divide 2,240 by 4 to get 560 grams of carbohydrates each day.

The next issues to cover are how often and when to eat. In general, bodybuilders know that more frequent, smaller meals are superior to less frequent, larger meals. Most of the scientific research on meal timing focuses on overweight groups and/or weight loss. One study using boxers found that while on a "1,200 calories per day" weight loss diet, six meals worked much better than two meals for preserving muscle mass.(9)

While the effects of meal frequency on total weight loss can be debated, one thing is clear – small, frequent meals preserve muscle better.(10-12) While these studies focused on weight loss and not weight gain, I think that they're still useful to add to our body of knowledge. It's a safe bet that smaller, more frequent meals are a better option than fewer, larger meals for putting on muscle while minimizing fat gain. Based on this wisdom, our 200-pound bodybuilder will eat six meals per day.

As far as when to eat in relation to working out, research on rats shows that eating a meal immediately after exercise is better than waiting several hours, if you want to create muscle-bound rodents.(13) Research in humans has shown that essential amino acids stimulate protein synthesis (14) and glucose prevents muscle protein breakdown (15) after lifting weights. We also know that protein and carbohydrates taken together stimulate more of the anabolic hormone insulin when taken before and after weight training.(16) Insulin is important because it can decrease muscle protein breakdown after lifting weights.(17)

Putting all of this together, we have a lot of support for an insulin-stimulating drink immediately after exercise. A recent review indicates that this post-exercise drink should be taken immediately after exercise and again one-and-a-half to two hours later.(18) While the research isn't very clear on this, the same review article estimates that a 3:1 ratio of carbohydrates to protein should be used in formulating this post-workout drink. Other investigators have recommended even higher ratios, up to 4:1. Since our model bodybuilder is trying to gain weight while training his ass off, he'll need some extra carbs, so 4:1 is a good choice.

Let's put everything together now in a sample Get-Big meal plan. Samson wannabes should take in 3,840 calories a day, of which 160 grams are protein, 107 grams are fat, and 560 grams are carbohydrates – every day. On days that he works out, he'll have 27 grams of protein for each meal. His two post-workout shakes will consist of 27 grams of protein, 108 grams of carbohydrates, and nothing else. Whey protein and any of these carbohydrates is the first choice: glucose, dextrose, glucose polymers, fructose, or maltodextrin. Otherwise, grape juice will work. If he takes creatine, then he adds it to these shakes.

The remaining four meals on this workout day will each have 27 grams of protein, 86 grams of carbohydrates, and 26 grams of fat. Emphasize consuming fruits, vegetables, nuts, fish, and lean meats. Sources for healthy fats include olive oil, flaxseed oil, and flaxseed meal. Here's an example of a single day's meal plan:

Feel free to experiment and incorporate some variety in this Get-Big meal plan. Notice that an emphasis is placed on foods that are high in antioxidants, omega-3 fatty acids, and monounsaturated fatty acids. This program works well for putting on size and will keep you healthy in the future.

You Gotta' Have Faith

Most guys plan their workouts with incredible details. When you ask them about their meal plan, you get a blank stare. Why waste all of that hard work in the gym with a half-assed diet? Take some time and plan out what you need to eat and when you'll eat it. This way, you'll be sure to have what you want at the right time.

Have faith, the Get-Big strategy is easy to follow. Don't make the mistake that our superprotein-compensated genius/hero made. You'll be a believer once you incorporate science into your eating plan. You probably noticed that supplements were only mentioned in passing with this plan. Future articles will help you individualize this approach and how to supplement for maximum benefit. 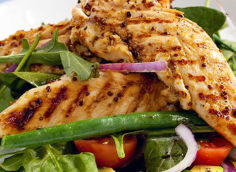 Eat as much protein as you want and it won't turn to fat. In fact, a new study shows it almost all turns to muscle. Check it out.
Dietary Myth Busting, Feeding the Ideal Body, Nutrition & Supplements
Dylan Klein September 24

When do you get a cheat meal when dieting? When you deserve one. And you probably don't deserve one yet. Here's why.
Diet Strategy, Feeding the Ideal Body, Nutrition & Supplements, Tips
Paul Carter May 14