Have you ever wanted to put a fist through your computer screen?
As online forumites, podcast listeners, connoisseurs of
uber-violent video games, and computer-savvy T-men (and T-ladies)
in general, I'll bet you have. Inevitably, a computer problem
arises that leaves you exasperated, even hacked off.

Most software purveyor's response to this is the infamous
"troubleshooter." The point of such things is to systematically
review sometimes obvious mistakes that we just need to calmly
address. When used patiently, troubleshooters can sometimes bring
us to a solution that may otherwise elude us.

With this in mind, I penned an article that applied stepwise,
error-correcting, flowchart-type thinking to a "glitch"
or "error" that plagues the lives of bodybuilders
everywhere. It was essentially a real life, weight gain
troubleshooter. The whole point was
to create the type of "help file" that one might use on a
computer. The one key difference was that my yes-no algorithm
wouldn't leave you frustrated.

Just as frustrating as lean weight gain is fat-specific weight
loss. I've met hundreds of people stuck so thoroughly on a progress
plateau that they want to punch themselves in the face – or
worse. So, rather than set yourself on fire or climb a tower in the
middle of your town with a high-powered rifle, take a calm look at
this new weight loss troubleshooter.

The algorithm, like its predecessor, is designed to continually
restart you through the self-assessment process until you're
happily moving downward along the extreme left side and the bottom
where success will be sweet revenge after months of
frustration.

Let's offer an example. Orson McButterpants decides his gut
has plagued his profile long enough. He starts dieting aggressively
in his usual manner but this time has the Fat Loss Troubleshooter
taped to his wall. After four weeks of losing weight (a definite
"yes" on the chart) he's convinced that he's losing an undue
proportion of muscle mass, so he begrudgingly answers
"no" to the question of whether it's fatty weight that
he's shedding.

Since his mother is a Type II diabetic and he suspects that he
may himself be a poor carb metabolizer, he feels he has a good
handle on his slightly tweaked 30/35/35 macronutrient proportions.
He's also sure never to skip breakfast or his mid-morning
snack, plus he always gets a meal after weight lifting. Thus, he
answers "yes" to the second question on the chart. He
feels his diet is indeed appropriately restricted and
timed.

This brings him to the "Adequate training?" question.
As someone who's always favored lighter, high-rep weightlifting to
stay "toned" during dieting (shudder), he's forced to
come face to face with an answer of "no." He calculates
that he's using 50-70% of his one-rep max, which may not be enough
mechanical tension to maintain his muscle mass.

He also acknowledges that his utter lack of aerobic conditioning
may be hampering his ability to optimally burn fat as a preferred
fuel. Thus, in addition to his four-time weekly non-panting cardio,
he adds just five 30-second cycle sprints (about 10-12 minutes) at
the end of his heavier weight sessions. He knows this isn't
enough for best results but it's a cautious start. He has
perceived some muscle loss after all.

After a month of this, he starts the algorithm over. He's indeed
managed to halt the muscle loss, at least through informal
observation, but now he's struggling to keep the munchies at
bay. He figures it may be because he's eight weeks into the diet
and has dropped nine pounds. Perhaps a lack of leptin (from the
reduced fat mass) is already calling. He honestly answers
"no" to the "Adequate kcal deficit?"
question.

He decides that he could use more solid-type protein in his diet
to help with satiety (satisfying fullness), so he replaces his
rather large skim milk intake partly with cottage cheese and
berries. He also starts carrying canned tuna and chicken to eat
with his whole wheat snack crackers, which he keeps between the
front seats of his car.

And because last week he started cheating after dinner, he
chills gelatin and sugar-free whipped topping desserts as soon as
he gets home from work.

Orson starts the algorithm over after three weeks of mostly
tamed munchies and a further pound of weight loss. This time his
answers take him clear through to... success!

You see how it works?

As with the previous algorithm, the only dead-end here is the
genetics / meds / hormones / lifestyle trap on the lower
left. But even then there's hope. Stubborn lifters can move beyond
the chart at this point by creating their own troubleshooter.

For example, a visit to the physician can bring blood work,
alternate meds, counseling for stress or alcohol or insomnia, and
thus a better state of being. If that doesn't bring a
satisfactory response, one can assess why. Perhaps the recourse
will be to see another, more understanding doctor. Perhaps it'll be
yet another medication change. Perhaps it'll be to finally get into
meditation. Or counseling. Everyone can draw up a best guess
algorithm with the right professional input.

Of course, there are variables (factors) in life beyond
what's on this little chart and they may call for their own
algorithm before ever reaching the dead end. One that jumps to mind
immediately is the debate over whether ongoing fat loss requires
dietary metabolic stimulants to fight the natural slowing of
metabolic rate and the fatigue that sets in increasingly as the
pounds come off.

Aside from a general avoidance of harsh, target date-type
dieting, my personal solution has been prudent use of half-caf
coffee, the occasional half of a Spike tablet,
or half of a caffeine tab (yes, I'm that hyper-sensitive) and
plentiful green tea (moving toward six cups per day).

Whatever your personal life variables may be, this
"if-then" approach can lead you toward the calm,
objective scientific thinking that's solved so many of
mankind's problems. So, "if" you don't like
what you see here, "then" you can always go with that
frustrated self-administered punch in the face. 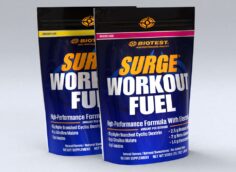 A bodybuilding diet expert answers all your questions, covering everything from cheat meals to how to measure body fat. Check it out.
Diet Strategy, Feeding the Ideal Body, Nutrition & Supplements
Bryan Krahn January 12