Love Handles In a Box

Fact: The unhealthiest foods you could possibly eat often have the most health claims on the label. Ironic, isn't it? Think about most breakfast cereals. You're basically eating a bowl of sugar and flour. But the front of the box is packed with health claims:

Flip that box around like a smart grown-up and take a look at the ingredient list: sugar, flour, sugar in another form, sugar in a different color, sugar with a pretty name, etc. It's Type-2 diabetes in a bright box featuring a cartoon character selling love handles and loneliness.

And now they have a new marketing angle: a clever blend of childhood nostalgia and "fat acceptance." They tell us to eat what we want and love our body no matter what it looks like. Presumably, this is because they've finally recognized that the only people still eating cereal for breakfast have already given up on their health and body composition.

Funny thing is, when looking at the evidence, it's clear that there were never really health benefits in the first place to back up all these "healthy" labels. Here's how many of them originated and why they're wrong.

It's taken over 40 years to officially call BS on the fraudulent claims about fat. The fear of dietary fat started in the 60's and 70's and immediately moved breakfast cereal into the "healthy" category. Hey, sugar is fat free! Bacon, eggs, and butter were out. Low-fat indigestible roughage was in because the research of the time was suggesting that saturated fat was clogging our arteries and increasing our risk of heart disease.

And despite the various top-notch review studies disproving this myth today, the cereal killers, sugar-water sellers, and big pharma phonies continue to lobby government officials, pay off medical and fitness professionals, and fund bogus research studies to keep it alive.

A low-fat diet isn't a benefit because eating fat doesn't cause disease. NOT eating it probably does, and we now know the body even needs some saturated fat to function optimally.

Once you understand the origins of the low-fat guidelines it's easy to see how the advice to eat more fiber came about.

Denis Burkitt was the man behind the 1970's research linking high-fiber diets to lower rates of disease (colorectal cancer specifically). Just like Ancel Keys (the fat fraud), his evidence was awful. He basically claimed that African tribesman were healthier than Westerners because they ate their grains whole (with the fibrous outer shell). He conveniently failed to include a number of disease-free tribes thriving on starch-less diets high in saturated fat and animal protein, like the Masai.

Nonetheless, the bran we were throwing in the garbage became a prized possession, Burkitt wrote a best-selling book, and the "high-fiber" stamp fit perfectly next to the "low-fat" one on our breakfast bowl of blood sugar and body fat. It remains there today, right along with the misconception that whole grains are healthier than refined grains and that more fiber is a good thing, regardless of the source.

Meanwhile, the only study looking at the long-term impact of eating a high-fiber diet (DART, 1989) found an INCREASED risk of heart disease (23%) and mortality (27%). Those studies looking at colorectal cancer saw no benefit to upping our fiber intake:

"Our data do not support the existence of an important protective effect of dietary fiber against colorectal cancer or adenoma." (Fuchs CS et al. NEJM, 1999)

The "lipid hypothesis" suggests that elevated cholesterol is associated with heart disease. And when we add it to what high-fiber, low-fat fanatics tell us, it's no wonder we think the way we do and fall for bogus health claims.

Right around the time all this low-fat, high-fiber evidence was surfacing, doctors and scientists were convinced they'd found the underlying cause of atherosclerosis – the narrowing and hardening of arteries. Nearly every doctor was on board with the theory. In the early 80's the National Institute of Health gathered 14 experts who voted unanimously that, "Lowering elevated blood cholesterol levels will reduce the risk of heart attacks caused by coronary heart disease."

They did so despite the fact that a causal relationship was never established, there's a library of evidence disproving it, and the original experiments used rabbits (herbivores that can't process dietary cholesterol) and a chemically prepared bare-cholesterol, which tends to oxidize.

But along came the prescription statins, and all of a sudden the questions and doctors aggressively opposing the theory disappeared. This created an environment where we dish out damaging side effects to more than 32 million Americans to lower the thing that's NOT associated with heart disease and does nothing to prevent it.

What we do see is statins causing mitochondrial and hormonal dysfunction, and lower cholesterol levels associated with cognitive and neurological impairment (Alzheimer's, Parkinson's, depression). This shouldn't come as a surprise when you understand that cholesterol is a building block for cell membranes, precursor to steroid hormones and essential nutrients, and fuel provider to neurons who can't generate it on their own.

"Our finding that low plasma cholesterol is associated with depressive symptoms in elderly men is compatible with observations that a very low total cholesterol may be related to suicide and violent death." (Morgan RE, et al. 1993, Lancet.)

Cereal fiber's ability to lower cholesterol is more of a detriment than a benefit. And realistically, the people getting heart attacks are the ones with elevated triglycerides, low HDL cholesterol, and excess small-dense (oxidizable) LDL particles – the same thing eating less saturated fat, more high-glycemic carbs, and vegetable oil-filled boxes of stuff claiming to "lower cholesterol" provides.

Heard the one about the obese, pre-diabetic guy with high triglycerides? Doc told him to eat less salt!

That's a joke. Or at least it should be. Salt doesn't make you fat and it's probably the last thing the average person needs to be worrying about when it comes to health.

High blood pressure is the fourth and final phase that turns Syndrome X into the Deadly Quartet. When you have metabolic syndrome, eating less salt won't do anything to solve the real problem.

More importantly, trying to abide by the FDA and AHA's recommendations to keep salt intake below 2400 mg per day (1tsp) increases cardiovascular disease risk and mortality from a heart attack or stroke. Ironically, this appears to be the result of elevated triglycerides and reductions in insulin sensitivity – the same thing driving the high blood pressure in the first place.

Therefore, one could say that your low-salt food is a double-whammy since you're consuming the food that's elevating the cause of high blood pressure and opting for the "lowers blood pressure" variety that's making it worse.

The gliadin proteins in wheat can be damaging to many people because of those proteins' ability to induce inflammation and increase intestinal permeability. Wheat itself may also cause cravings and interfere with your appetite-regulating mechanisms.

However, this doesn't mean all products with a "gluten-free" stamp of approval are suddenly health foods. Pizza is still pizza, pancakes are still pancakes, and a slab of pound cake beside your coffee is and always will be a bad choice... gluten-free or not. This should be common sense, but millions are willingly fooled every day because it's pretty easy to convince us that a delicious junk food is fine when it has an official-looking health claim on the box.

Just like we were tricked into selecting low-fat and low-sodium packaged products because of their apparent health benefit, food marketers have simply found another way to convince you that their bag or box of garbage is healthy.

Gluten-free cereal may be better than gluten-filled cereal, but it's still cereal. And you'd be better off leaving both for the birds. 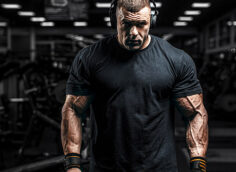 You've probably got some of this stuff in your cupboard. Add it to everything you can think of.
TC Luoma June 20 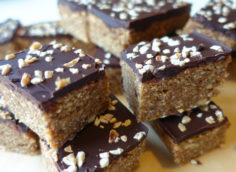