Once again, inspiration has struck and recipes are as abundant as implants at a fitness pageant. "Damn!" you may be saying to yourself, "How the hell does Berardi keep coming up with these recipes?" Well, you see, after an especially grueling squat and clean workout, I somehow drive myself home in that all-too-familiar surrealistic, pseudo-drunken state, swig down some post-workout nutrition, and hit the pillow. That's where the inspiration strikes.

As I drift into deep REM sleep, the gray matter starts smokin'. Rather than just giving you the goods like a drunk date on prom night, I'd like to describe to you my latest inspirational episode.

You see, during this sleep I found myself back in the college dining hall. The only thing there to drink was this funny looking grape Kool-Aid. Since it was sugar free, the boys and I were drinkin' it down. Next thing I know my watch communicator is ringing (what, you don't have one?) and Jason Alexander from Seinfeld is telling me that I need to report to the Saudi Desert to diffuse a hostile situation. Hey, it was a dream, this kind of think happens, okay?

So before I could put down my sixth cup of Kool-Aid, superman showed up outside with, of all people, the cast of Friends. I didn't even know they hung out! Anyway, we all flew over to the desert together. It was kinda weird because I didn't know that David Schwimmer could fly, but at this point, who am I to question? After all, I've got my orders.

Somewhere over France I fell a little behind and noticed that Courtney Cox wasn't wearing any panties. Needless to say, I flew behind her the rest of the way. While Jennifer Aniston and I were enjoying the view of Courtney's sweet little arse, we had a little chat about nutrition (it takes a while to fly to Saudi Arabia). During this talk, she broke this recipe out on me. Apparently it's Brad's favorite.

To the eggs, mix 1 tablespoon of low or non-fat mayo and salsa (or hot sauce or anything else that's spicy will work)

Throw in 2-3 cups of chopped veggies

When you're ready to eat, roll up some of the mix into whole wheat tortilla shells. Really pack those shells tight if you want a high protein to carb ratio.

Damn, that Jennifer is cute...

When we reached the desert we met up with Aquaman and Danny Bonaducci. These guys, knowing we weren't accustomed to the heat, were nice enough to build us an in-ground pool. In case you didn't know, it's damn hot in the desert. While Aquaman was showboating his aqua prowess in front of the crowd (I think he noticed Courtney wasn't wearing panties), Danny Bonaducci slipped me a piece of paper. I unfolded it and it revealed this little diddy:

Toss in some curry powder

Pack in a Tupperware container and eat them later, cold

After a while, it was evident that Aquaman was getting nowhere with Courtney so we made our way to Saddam Hussein's crib. It seems the situation we were called to diffuse was a steamy love triangle gone awry between Saddam, Betty White, and Sarah Jessica Parker. I don't see the logistics of that, but suffice to say, Betty and Sarah were growing quite jealous of each other. Luckily we were able to diffuse the situation and after doing so, Betty offered to make us lunch. It was about damn time since I hadn't eaten in several hours. (One builds up an appetite in the desert.)

The lunch was great, especially since I sat across from Daisy Fuentes, who insisted on rubbing my crotch with her foot while we ate. I know the question that's burning in all of your minds: "What were you eating?" Kitchen-sink burgers, of course! Here's the recipe:

Half pound of ground sirloin

Bread Crumbs (about a fistful)

Mix all these ingredients in a bowl, split the mix into two burgers, and broil them.

They were damn good. Thank you, Betty White!

After lunch we trekked back out into the desert toward base camp. Along the way we met up with some guy named Morpheus. He offered us some little red pills which he said would ensure we didn't become delusional in the desert sun and start dreaming of things that couldn't possibly happen. To thank him for the pills we let him hang with us. This became annoying though since he kept telling me that I was "The One." Whatever.

We brought him all the way back to base camp with us because he claimed that he had this great post workout recipe. Turns out he was speaking the truth! He made us orange-protein creamsicles. Here's the recipe:

He put it all into a blender until it got thick, then stuck it in the freezer until it was half frozen. We enjoyed the meal, but while we were eating he was acting all funny. He thought we'd be impressed with his bending of serving ladles in the crack of his ass trick. After the third or fourth ladle we decided that Morpheus had to go.

Next thing I knew, my alarm clock went off. It was time to get up and go to work. Luckily it was all a dream, but thanks to the cast of Friends, Superman, Aquaman, Danny Bonaducci, Morpheus, Jason Alexander, and Betty White I got all these great recipe ideas.

Back in my real life, it turns out I overslept a bit and didn't have much time to prepare a meal, so I just whipped up what I like to call the "Berardi Instant Breakfast". Grab yourself a blender and throw in two cups of skim milk, three scoops of Advanced Protein, one half cup of dry instant oatmeal, and a little sweetener. Blend it up for 30 to 60 seconds and suck it down. It's a great meal if you're in a rush, especially if you're like me and like to abuse the snooze button.

To recap the recipes:

Fry in a pan until egg is cooked

Half pound of ground sirloin

One half cup of dry instant oatmeal

Blend together for 30-60 seconds

There you have it, five new inspired recipes to spice up your diet. Who said muscle-building food had to be boring?

Forget what the internet gurus are telling you. These supposedly “healthy” foods are anything but!
Dietary Myth Busting, Feeding the Ideal Body, Nutrition & Supplements
Brian St Pierre November 30 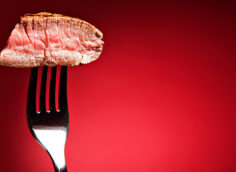 Everyone fights about how much protein to eat, but what really matters is how much protein you absorb. Here's how to soak up every gram.
Diet Strategy, Feeding the Ideal Body, Nutrition & Supplements, Protein
Chris Albert August 28