Most newspaper movie reviewers and restaurant critics use the "star" system to evaluate the merits of whatever film or eatery they're critiquing. This system is so widely used that practically any member of Western society automatically knows that a "4-star" restaurant is serving up some pretty good eats, or that a 4-star movie is probably going to make boffo box office.

Conversely, a 1-star restaurant is most likely to be found along the highway with EAT spelled out in 10-foot high letters; a 1-star movie is likely something that started as a Saturday Night Live skit and found its way to DVD format in about a week.

However, the "star" system is a little too conventional for us here at Testosterone. It lacks, shall we say, a certain testicularity. We need a rating system with a little more oomph and a lot more balls.

What I'm going to do, from time to time, is to evaluate various nutritional supplements, chemicals, ingredients, foods, or practices. As you might have guessed, a 1-nutsack rating conveys lameness whereas a 4-nutsack rating conveys both quality and ballsiness (remember, each nutsack, with few exceptions, contains TWO balls–that's double the quality!).

Let's see what's at the bottom of our gym bag this month.

If it's Scottish, it's Crap!

If you're interested in your health, then you're no doubt eating salmon, lots of it.

Sure, you're eating poached salmon for dinner, popping salmon kabobs in-between meals, even thinking about whipping it up in your blender with a couple of scoops of Metabolic Drive.

I mean you'd have to be crazy not to, when you consider all those healthful omega-3 fatty acids that are just oozing out of that slab of delectably pink meat.

Trouble is, you're probably not really eating the type of salmon you think you are. You're probably eating something that's more closely related to a trout, one that's been dyed to mask its unappetizing gray color. What's more, that trout has been raised largely on a diet of grain, which negatively affects the amount and variety of omega-3 fatty acids in its meat.

Here's the thing. There's obviously a huge market for salmon, but the pesky Pacific salmon, of which there are a number of varieties, can't be bred in captivity. As such, the season for catching Pacific salmon is pretty much relegated to the months of June and July.

Practically all the Pacific salmon are caught those months, and what isn't sold immediately is frozen or put into cans.

Because they're wild, they eat their nature-intended diet, develop their pink or reddish color naturally, and are chock-full of the healthful omega-3 fatty acids we humans covet. 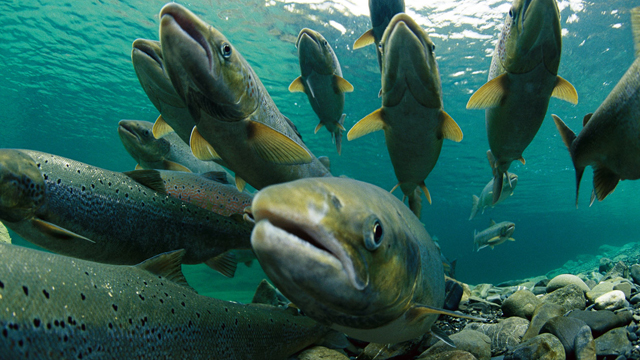 However, the Atlantic salmon – often referred to as "Scottish salmon" so you'll think they're wild and cuss a lot – can be bred in captivity. As a result, 99% of the salmon from the Atlantic Ocean are from fish farms where they're fed a diet of fishmeal and grain.

Because of this diet, the fish are naturally lower in omega-3 fatty acids, and what omega-3 fatty acids they contain will present as ALA, or alpha linolenic acid. Granted, the human body converts ALA to DHA and EPA (the essential fatty acids we prize), but the efficiency rate of this conversion is only between 2 and 15 percent.

Another result of their unnatural diet is their color; the flesh has the grayish hue of old Jockey shorts.

To remedy this fish farmers give the fish astaxanthin and canthaxanthin as artificial colorants. While astaxanthin can be extracted from shrimp flour, it's generally synthetic. Astaxanthin is a potent antioxidant and often enhances the fish's fertility and growth, but unfortunately canthaxanthin can accumulate in the human retina and have negative effects.

Another problem posed by captive breeding is disease. Farm-raised Atlantic salmon are plagued by sea lice, tiny parasites that feed on skin, mucus, and blood. As such, fish farmers must resort to chemical remedies that are harmful to sea lice and apparently humans, too.

In 2004, several warnings issued by European scientists advised people to only eat farmed Atlantic salmon every four months or so, lest their liver light up like a prop from the sequel to Tron. A subsequent study published in JAMA gave partial vindication to the beleaguered fish and said that the benefits (protein, reasonable amount of beneficial fatty acids) still outweigh the risks imposed by contaminants, but it still makes you wonder.

So sure, eating "Scottish salmon" is probably better than eating fast-food hamburgers, but it's not nearly as desirable a food as any of the varieties of Pacific salmon. Of course, you may not be able to readily find Pacific salmon – or afford it – but if you're like me, you won't want to harbor any illusions about what you're eating.

If you want to eat good, healthy salmon, I'd recommend stocking up on canned Pacific salmon and finding a good recipe for salmon patties.

Scientists – chocolatescientists to be more specific – at the ironically named Hershey Center for Health and Nutrition are lobbying for dark chocolate to be awarded the TITLE of "super fruit."

What these PhD Willy Wonkas are insisting is that the products of the cacao bean (including dark chocolate and cocoa powder) are equal to acai, blueberry, cranberry, and pomegranate in antioxidant activity.

Surprisingly, their research proves, at the very least, that they haven't drunk the chocolate milk of madness. To the contrary, it looks like their research is solid.

Their findings demonstrated that the antioxidant capability of the cocoa powder was better, significantly better, than blueberry, pomegranate, or cranberry powder on a gram-to-gram basis. 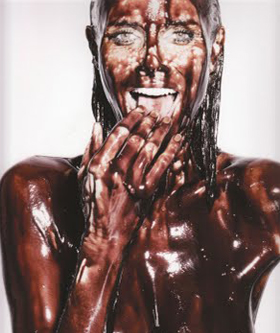 Regardless of the surprising performance of chocolate, I'm only going to give it a 1 on the Nutsack Rating because people don't simply eat the fruit of the cacao bean by itself; they eat it after it's been mixed with cream, butter, sugar, and any one of hundreds of artery-clogging, nutritionally void ingredients.

Furthermore, I just don't get that jazzed up by antioxidant ratings for this or any other of the seemingly endless stream of weekly "miracle" fruits and vegetables.

While eating Hershey's chocolate bars, kisses, cocoa, and syrup might sop up free radicals as well as an equal amount of fruit, you should know the whole antioxidant craze has been exploited more than Kim Kardashian's ample ass.

Everything, I mean everything, that comes from a plant that's at least partially digestible is an antioxidant. Once you realize this, you're less likely to be swayed the promise of the label, "high in antioxidants" that's printed on everything from shitty breads to tortilla chips to the hemp underwear on Woody Harrelson's butt.

Every week, someone is purporting the magical effects of some food on some disease, largely because of the fruit or vegetable's antioxidant capability.

As an experiment, I just did a Google search on a random disease. I typed in "prostate cancer," and then, in succession, paired it in my search with tomatoes, potatoes, broccoli, asparagus, and mangos. There were ample research studies on each of them, all claiming to have had some success in combating the dreaded disease, at least in vitro or in lab rats.

There are thousands, probably tens of thousands, of plant chemicals that work as antioxidants, or, equally important, that has some unknown or unexplained health benefit.

And therein lies the danger of falling in love with a particular fruit or vegetable. Yes, relying on this week's super fruit or vegetable will likely confer huge antioxidant benefits, but you'd be missing out on the thousands of other chemicals, minerals, or vitamins that you might need to complete the health picture. 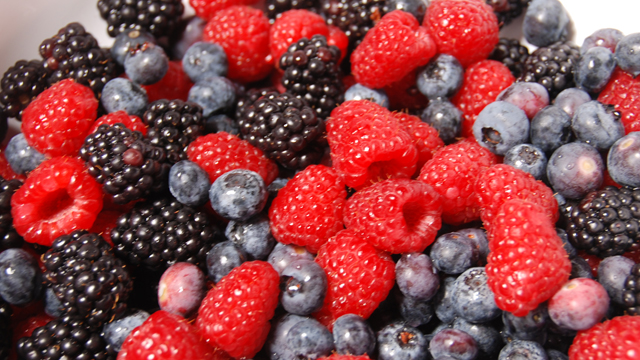 This is one of the reasons we put together Superfood Freeze-Dried Super Extracts. Rather than focus on a single food like blueberries, acai, pomegranate, or even chocolate, we put in a number of fruits and vegetables, all of which had high-antioxidant ratings and all of which had other interesting qualities.

The net result is a product that is so concentrated, one little scoop has the antioxidant equivalence to 8 to 12 servings of vegetables, not to mention the huge variety of phytochemicals that come along for the ride.

So this pretty much boils down to one rule:

Eat a large variety of fruits and vegetables and eat a lot of them.

The world of fruits and vegetables has no clear-cut MVP's; they're all superstars.

As such, I give the concept of "This Week's Miracle Fruit or Vegetable" just one Nutsack, while I give each individual fruit or vegetable 4 Nutsacks.

Nutsack Rating for "This Week's Miracle Fruit or Vegetable":

I've long advocated the benefits of eating grass-fed beef. Unlike their corn-fed counterparts, grass-fed beef have a fatty-acid profile that's good for humans.

While the average corn-fed piece of beef has an omega-6 to omega-3 ratio of about 20:1, grass-fed cattle have a ratio closer to 3 or 2:1, which is similar to that of salmon (wild Pacific salmon, that is!).

So, if you were looking for one demon to blame for many of the health woes of the average American, you could make a great case for corn and corn-fed cattle.

Lately, however, we've all wised up the notion that we should be avoiding corn-fed beef in favor of grass-fed beef.

However, in all my advocacy pieces, never did I imagine that unscrupulous marketing practices would think of some way to take advantage of even this simple little piece of advice.

Here's the deal: ALL cattle are grass fed...initially.

And that's the simple fact that unscrupulous businessmen have latched onto.

But when the cattle are just a few months away from the slaughterhouse, they're "finished" with a diet consisting largely of corn. This of course changes their fatty-acid profile to a negative one, but they can still say their livestock were "grass-fed."

So in order to get what you want, you now need to make sure you ask your butcher if the beef was "grass-finished." Only then can you be a little more confident that the rancher or butcher isn't playing word games with you. (Of course, you should be able to tell the difference between corn-fed and grass-fed as the former tastes more like what you remembered from your childhood and the latter tastes a little bit more sweet and a bit more, well, grassy.)

That's all I've got this time. May your nutsack be bountiful and never flap loosely in the wind.

we investigate our differences by looking at some hard data, and decide that there can be no sane approach that will work for every "dieter."
Feeding the Ideal Body, Nutrition & Supplements
Lonnie Lowery, PhD March 21

You are what you eat, right? Not really. Here's what you need to know.
Diet Strategy, Feeding the Ideal Body, Nutrition & Supplements, Tips
Paul Carter October 18