Q: Mike, could you explain just what "refeeds" are and when they might be appropriate? I've seen them mentioned, but I'm not clear on just what they are. Thanks!

A: Good Question. Refeeds are best used when interspersed throughout long periods is calorie and/or carbohydrate restriction. As the name implies, you're acutely refeeding nutrients (calories and/or carbohydrates) into your system after it's been deprived of those nutrients for a predetermined period of time (5 days, 7 days, 2 months, etc.).

It's important to distinguish between a "refeed" and just trying to rationalize going off your nutritional plan (e.g. cheating). Refeeds are strategically placed and when used right are integral parts of your nutritional plan. Cheating on your diet is more often than not an unplanned event brought on by poor planning or exposure to a situation in which your will power is compromised and you succumb to the primal urge to stuff your face!

Like with most things, there are several rumors, misuses, and down right false statements that have been floating around the fitness world about refeeds. Let's look at two of my favorites.

"Hey... you wanna secret formula for some powerful "home-brew," muscle-building hormones? I don't mean the crap they sell on the streets – I mean the good stuff... real insulin, testosterone, insulin-like growth factor-1 (IGF-1), etc. You know, the stuff that really works! The juice that packs on muscle mass like nothing else in the world! Well... if you do, keep on reading because I've got some AMAZING... "

... I'll stop there as I'm sure you get the point. It was a little over hyped. One of the problems with this approach is that people have a much greater ability to over consume than under consume. They'll eat their faces off and stuff their adipocytes so full of triglycerides that they can't possibly burn it all off in the following two week period. Previously on T-Nation, TC and Chris Shugart & John Berardi have put together more of a thinking man's approach to this same concept.

Let's get back to more traditional refeeds how to use them constructively.

3 Effective Ways to Use Refeeds

I'm sure other nutritionists have ways they like to use refeeds but here are the ones I've found to be the most popular.

This method was made popular by Dr. Mauro Di Pasquale's Anabolic Diet. For those of you who aren't familiar with the anabolic diet (actually it is now called the Anabolic Solution), here are the basics:

Pretty simple, but very effective. During the week of low carbin' it, you'll deplete your glycogen stores and shift your body to using fat as its primary source of fuel. During your carb up, you'll stuff your glycogen stores full (and even a little beyond their normal capacity) and stimulate the release of insulin. Insulin does get a bad rap, but it's an extremely anabolic hormone that when used correctly is very beneficial. (Biotest's Surge works well in this application.)

Where people go wrong with these types of refeeds is that they don't listen to (or look at) their body. They just carb up for 48 hours. However, Dr. Di Pasquale is very clear that 48 hours isn't a hard recommendation. Instead it's a guideline.

"The important thing is knowing when you've had enough. When you start feeling puffy and bloated and can even sense the fat coming on, it's time to go back to your weekday high fat/low carb routine."

For carboholics this can cause a problem because it's very easy to ignore the above statement and justify in your mind that the rules say you can carb up for 48 hours... if you'ree feeling puffy on Sunday, then put the deep dish pizza down!

Another strategy that Dr. Pasquale recommends is to eat low GI carbs for the first half of your reefed and higher GI carbs for the second half. This will initially keep your body's secretion of insulin in check allowing you to consume more carbohydrates overall.

One of the things that's unique to the Anabolic Diet is that it's one of the rare (maybe only) times when you can incorporate a reefed into a mass building nutritional phase. Most of the time refeeds are used when calories and carbohydrates are restricted, but with the Anabolic Diet you'll always be restricting carbohydrates (whether trying to lose fat or gain muscle), thus there's an opportunity to take advantage of refeeds with carbs.

If you're not familiar with the Anabolic Diet and the above section has peaked your interested, I suggest you check out the "Diet" thread and the Anabolic Solution Book.

2 – One Refeed Day Every Two Weeks

This application of refeeds is probably in the forefront of most T-Readers as it's the reefed methodology that Dr. Berardi uses in the Get Shredded Diet. The regular two-week refeeds when on a very low calorie diet have a similar benefit to the Anabolic Diet type refeeds as they'll jam your muscles so full of glycogen that you'll think your scale is broken when you step on it the next morning.

One of the benefits of the every two week refeed is that you'll run less of a risk of laying down body fat as the caloric/carb spikes only happen for 12 hours (unless you get up early just to eat) every two weeks. The major benefit to this type of refeed is psychological. Being on a very low calorie diet is draining and taxing. Refeeds every two weeks give you short term "goals" to strive for, making the daily grind of consuming 2000 calories (or less) more bearable.

This novel strategy was introduced to me by Dr. Lonnie "Lats" Lowery as he employed this strategy last time he was getting ready to don the posing trunks.

Here's how you can apply this reefed to your nutritional strategy.

This application of a reefed is the most likely to have an influence on increasing your metabolic rate back to normal and boosting thyroid hormone output due to the duration of the refeed. Increasing your caloric and carbohydrate consumption for 7 days is most likely going to allow for a resetting of your thyroid and metabolic rate to some extent, if not completely.

One of the problems that many people run into with this kind of refeed is that it takes a lot of planning. How many people do you know that plan a 20-week diet period? I bet you can count them on one hand. This reefed (like the others) will provide a well deserved break from the world of caloric restriction. This benefit should not be overlooked as it may be the most important.

To wrap up this look at refeeds:

Q: Mike, I'm constantly on the go. Do you have any recommendations for muscle building snacks?

A: This is definitely a problem for many people (myself included). If you're constantly on the run you're going to need fuel that you can carry with you to feed the machine. Here are a few good options:

Mix these together in a bowl, adding 1/4 cup water (or less if you can manage) and Splenda, to taste. At first, it will seem like it's not enough water, but keep stirring, and it will eventually become a moldable blob of dough that looks like what you would imagine it will look like on the way out of your body. Divide the mixture in half, and put it into separate pieces of plastic wrap, shaping into a bar within the wrap. It's easier to shape them by laying plastic wrap in one side of a small casserole dish, pressing the dough into the natural shape of the dish. Put the bars into the fridge, or store them in the freezer. You can eat them chilled, or even frozen, or you can eat it right out of the bowl with a spoon if you're feeling impatient.

Another great homemade protein bar is the Vanilla Meringue Trail Mix Bars created by Gourmet Nutrition co-author Dr. John Williams. These bars are great because they have the crunch of cashews and almonds but the softness of the dried cranberries. Try not to eat the whole batch at once.

None of the recipes call for any sort of grain either so if you are looking for more ways to construct meals containing vegetables, lean protein, and natural fats you'll find more ideas than you'll ever need in this book. 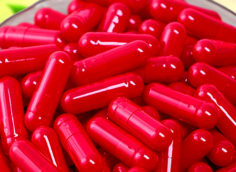