Three years ago John Berardi unleashed Massive Eating, a diet designed to help you put on buckets of muscle while minimizing fat gain. This controversial eating plan called for much higher calories than most of us were used to. It also asked us to do something that seemed strange at the time: not eat a lot of carbs and fats together in the same meal.

Does it work? After three years of being guinea-pigged by thousands of T-Nation readers, we can answer that question with an enthusiastic heck yeah it does! Berardi is definitely on to something here.

Now, JB says it's time for some "upgrades." Can he improve upon an already effective diet? Can he really take this eating plan to the next level? Or should he have taken a tip from the movie The Matrix and stopped with the first one? Decide for yourself as Massive Eating gets reloaded!

The Massive Eating plan was designed for one reason: to help mass-obsessed trainees tackle three muscle building challenges. These challenges include:

With these three goals outlined, it's now time to make a choice. You can take the "blue pill" (stop reading here) and be content with the original Massive Eating plan. Or, Neo, you can take the "red pill" (keep reading) and I'll take you deep into the rabbit hole.

That's right; choose the red pill and many of your old notions of how to use the Massive Eating plan may be destroyed. But rather than leaving you suspended, unaware, in a chamber of red protoplasm, I'll replace the old with new information, info that'll help you reinforce the Zion that is your physique. The choice is yours.

Good, in reading on you chose the red pill. It's time for re-education. Hang on because the first part is a small taste of scientific theory. In other words, Kansas is going bye-bye.

To begin, the shelf-life of any article based on scientific information, including Massive Eating, is short. Why? Well, the answer is based on how scientists view experimental data and theory.

Now, if Newton had used only this one data point to justify his theory, people would've assumed the apple hitting him on the head had turned his brain to applesauce. Therefore, Newton followed up this one piece of experimental data with many more pieces. As the data accumulated, a comprehensive theory was put forth to explain all these data points and the force that governed them.

So what's this got to do with today's topic? Well, the point is that as experimental data are collected, theories are generated to explain these observations. But since the data keep coming even after the theories adequately explain prior data, the goal of the scientist is to reconcile the new experimental data and the theory.

For those not interested in the ideas behind experimental data and theory, let me tie this all together by breaking it down real simple-like. Sometimes the new scientific data pulls out that high speed, Matrix-style Kung-Fu and beats down the old science, leaving it broken, battered, and obsolete. As a result, a new theory must emerge.

Although the original theory outlined in Massive Eating was fairly elegant and was very effective for thousands of athletes who tried it, I've been looking at new data and have been trying to reconcile these data with the Massive Eating theory. With these new data available, the old theory hasn't exactly broken, however, it has adapted to accommodate these new observations.

As a result of this adaptation, this article was born. In it, I'll be presenting two key ways to make the Massive Eating plan even more effective. First, I'll present a systematic and highly individual outcome-based system of increasing energy intake. Secondly, I'll be discussing a nutrient timing strategy that emphasizes the importance of the time dimension in feeding.

As outlined in the original plan, many weight trainers fail at gaining muscle size for one simple reason: they underestimate how much food it actually takes to get massive. Wondering how much food that is again? If so, go back and do the calculations. Better yet, pay a visit to the Massive Eating Calorie Calculator. This little calculator will save your cerebral energy for more complex mental tasks like hacking into the Matrix.

Once you've done these calculations, gotten over the calorie shock, realized that I didn't just make those numbers up but actually derived them from scientific studies , and come to grips with your impending grocery bill, it's time to assimilate a piece of information new to this article: gradually increasing energy intake to reach your new calorie goals.

Ramping Up To Warp Speed

Over the years, many have wondered just how quickly they should increase their energy intake to meet their newly calculated requirements. For example, if an athlete is eating 2500kcal per day and Massive Eating tells him to eat 5000kcal, he often wonders whether he should simply begin eating 5000kcal right away or whether he should gradually increase his energy intake.

To answer the question, I'd like to refer you to an algorithm I call the Nutritional Individualization System. This algorithm is fundamental to your understanding of how to increase (or decrease) your energy intake. As you'll see, when trying to gain muscle mass, the energy increases should be initiated very slowly. 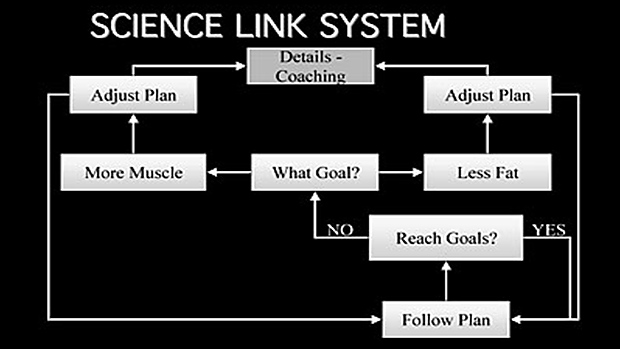 Starting at the lower right hand corner, you'll notice the box labeled "Follow Plan." At this point you can assume "Follow Plan" to mean following a baseline nutritional intake complete with good food choices, a moderate to high protein intake, good post-workout nutrition, and few meals that contain lots of carbohydrate and fat.

For a better idea of what this entails, "Follow Plan" means eating according to the seven rules laid out in my previous article, The Seven Habits of Highly Effective Nutritional Plans.

If you're not currently eating in accordance with these seven habits (outlined below), be sure to begin doing so immediately:

Now, once you've adjusted your diet to conform to these seven practical habits, start thinking about using the Nutritional Individualization System to change your energy intake. Here's how: After two weeks of following the new nutritional plan (same energy intake, different foods and nutrient timing), it's time to assess your progress objectively (i.e. body weight and body fat measurements) and ask yourself whether you've accomplished your body composition goals – the "Reach Goals?" section of the chart above.

If the answer is "Yes", simply keep repeating the plan until, of course, the answer becomes "No". If the answer is "No", then if your goal is to increase muscle mass, you need to adjust the original plan by eating more food.

To begin the adjustment process you have to alter energy intake – calories. Start by adding 250kcal to your total energy intake each day. If you were eating 2500kcal per day, increase this number to 2750kcal per day. What kind of calories should you add in? We'll get into that in Part II of the article; for now it's important not to get ahead of ourselves so let's stick with the actual energy manipulations.

After adding 250kcal into your diet, follow this adjustment for two weeks. At the end of the two weeks, it's time for another reassessment of your goals. After recording body weight and measuring body fat, again ask yourself the question, "Reach Goals?" If the answer is "Yes", then keep repeating the plan as it now stands until the answer becomes "No". If the answer is "No", simply revisit the original plan, alter it by adding another 250kcal to the total energy intake, and reassess after another two weeks.

Looking over the system above, it seems pretty simple, right? Well, the hard part isn't in the details, it's in being patient enough to consistently follow the plan. If you can patiently follow this process systematically (i.e. make an adjustment, wait two weeks, reassess, adjust again) you'll find your patience is rewarded by steady progress and very few "unexpected" results. After all, by adjusting on a bi-weekly basis, there's very little risk of packing on too much fat when trying go gain mass or of losing too much muscle when trying to get lean.

At this point you should notice that the Nutritional Individualization System is outcome-based. In other words, rather than telling you that one set of ideas is all you'll ever need to make progress, or selecting some calorie number (even a well-validated scientific one) and sticking to it without deviation, an outcome-based system allows you to figure out the intake necessary for your body based on your own personal response. I can't tell you exactly how many calories you need to eat; no one can because there are no calorie clairvoyants out there. Only you can figure this out.

But remember, the Massive Eating calculations shouldn't be abandoned altogether. Several research studies have been done to generate the equations used in the Massive Eating Calculator, so these equations are well validated and provide a good starting point. However, individual responses will most likely vary.

Coaches know this phenomenon all too well. Once you've been exposed to a lot of athletes or trainees, what you'll notice is that some individuals may actually begin to reach their goals of weight gain prior to hitting their calculated energy needs. Others may begin to gain when reaching the calories predicted by the calculator, and yet others will only begin to gain at energy intakes in excess of the predicted numbers. So don't be surprised if your results do vary. This is to be expected!

In fact, this variance explains why I've included the box labeled "Details/Coaching" in the System of Nutritional Individualization. While about 90% or more of the people out there will benefit from using this straightforward system, there are individuals who need an even more highly individualized approach to reach their full potential. This is where highly detail-oriented coaching is required, as a good coach can provide two key benefits:

Become Your Own Architect

Using the system presented in this article, you should now have some of the tools necessary to step up and become your own Massive Eating architect, to design your own system.

To begin, simply calculate your approximate energy needs and then adjust your meal plan to follow the seven habits without changing your energy intake. Next, at your current energy intake, assess your body weight and body composition changes after two weeks. Finally, begin to increase or decrease your daily energy intake by 250kcal based on how your body is changing over the two-week time intervals.

At this point a number of critical questions most likely remain. Sit tight. Next week I'll be back with details on what type of macronutrients you should be ingesting as you make your 250kcal bi-weekly increases and I'll present some new information on nutrient timing.