I remember the first time I saw those legs.

I was walking down the stairs at the Olympic Oval in Calgary Alberta – and with about three stairs to go, I looked up and saw the legendary quads, the peaked hamstrings, and the rock-hard glutes.

Of course, describing body parts that way might make them sound less sexy. So don't get the wrong idea, this woman was 100% babe.

But back to those legs. They had shape, they had definition, they had muscle. Even more, that shapely, defined muscle had carried her to countless Olympic medals, world championships, and world records.

That's right, Catriona Lemay-Doan was not only the fastest woman on ice, but she also looked the part. She was lean, muscular, and, of course, it didn't hurt that she was a super babe.

So I stalked her.

But since I was just starting out as a nutritional consultant to the Calgary Olympic centre at the time, I did resolve to find how she got that smokin' body, especially those legs – legs that most T-Nation readers wouldn't mind calling their own (easy boys, that's not what I mean).

Come to find out, no one told Catriona that her muscles would catabolize themselves if she exercised for more than 45 minutes at a time. And no one told her that she'd overtrain if she lifted weights more than 3-4 times per week.

No, she wasn't cautioned that if she did any aerobic work, she'd lose all her muscle mass. Nor was she told that eating more than 100g of carbs would make her fat. And she certainly wasn't provided kettlebells, bosu balls, gymnastics rings, or any of the latest faddy equipment to help her reach her training and body comp goals.

Nope, Catriona simply trained 2-3 times per day, accumulating about 15-20 hours of physical activity per week. She worked on multiple physiological qualities during each training phase, including: speed strength, maximal strength, elastic strength, muscular endurance, anaerobic power, and aerobic power. She skated, biked, and ran at different intensities and durations. She did Olympic lifts. She did max effort lifts. She did plyometrics. And she ate a high calorie, mixed macronutrient diet that included liquid recovery supplements.

How Much Can You Bench?

"How much can he bench?" I asked incredulously when I first saw Pavle Jovanovic, the world's top brakeman and US gold medal hopeful (with Todd Hays) in this year's Olympic games. Someone had just whispered some of his stats and I instantly felt small and weak, very small and weak.

I've seen a few. But trust me when I say it's still a novelty watching a guy like this sprint, push a bobsled, or lift weights.

However, we can take a few pages out of his workout journal to learn something about being big strong, functional, while still looking the part.

You bet your scrawny butt we can.

For starters, Pavle trains about 20-25 hours a week, split over 2 x 2 hour daily sessions. His sessions include maximum strength, speed strength, and elastic strength workouts as well as higher repetition general strength work. He sprints often and, of course, he spends quite a bit of time pushing a bobsled. In addition to his training week, he spends about 10 hours a week performing yoga, Jiao Dai, and stretching for recovery and regeneration.

Like Catriona, he's not afraid of overtraining, high reps, low reps, conditioning work, or any particular macronutrient. This guy simply trains a lot of hours each week, trains a lot of different muscle qualities each week, eats a lot of clean, organic calories each week (Pavel is an organic food junkie and ingests in excess of 6,000 calories per day), and is one of the best and most complete strength and power athletes in the world.

How Much Body Fat Did You Lose?

When 19-year-old Alice Graham came to me, she and her ice dancing partner Andrew Poje were reining bronze medalists from the Canadian Jr. National Skating Championships.

However, since she was 17 years old, Alice had been gradually gaining weight. Her coaches and competitors were starting to notice. And in skating, this is the kiss of death.

You see, when most young girls in skating hit 17 or so, their girlish figures disappear as they begin to carry more "womanly" body fat. Since very, very few individuals in skating know anything about proper off-ice training or nutrition, when a girl starts gaining, she's either pressured into an eating disorder or she gains weight and she's out.

So, going into this year's Canadian Senior National Championships, Alice and Andrew were a write-off. They were destined to place out of the top 10 spots, never to climb the skating ranks.

Well, that was until she sought me out.

With three months left till Nationals and the 5'6" Alice at an all-time body weight and fat high (135lbs and 22% fat), we began a 3 month experiment in G-Flux.

Well, G-Flux, otherwise known as energy flux (or energy turnover) is the relationship between energy intake and expenditure. It's the balance between the two. Put another way, it's the amount of calories you "turn over".

And as you'll learn in this article, having a high G-Flux is 100%, without a doubt, absolutely critical to building your ultimate body – which I'm assuming includes strong, functional, well-adapted muscle, low body fat, and great health.

After all, if that's not your goal – what the hell are you doing here at Testosterone?

And, speaking of a great body, just ask Alice, who showed up at Nationals at 122lbs and 14% body fat, what G-Flux can do.

That's right; in 3 months she lost about 13lbs of fat while preserving all her lean mass, accomplishing this with large increases in energy flux. Specifically, we increased her energy intake in a fairly huge way (by over 50% - and that wasn't arbitrary, folks) while re-prioritizing her training time (which was already about 5 hours per day) so that she would still be able to complete her skill work, but would also be able to work different energy systems, burning more total energy day in and day out.

And, by the way, these manipulations helped her and her partner place 9th overall, an impressive senior National debut.

How Much Muscle Did You Gain?

You could also ask CFL football athlete and Toronto-based speed and strength coach, Kris Aiken, what impact optimizing energy flux can have on the body.

Kris came to me as a 10% fat, 160lb, under-sized University of Western Ontario cornerback and after 18 months of applying the principles you'll learn in this article, he showed up at his CFL tryouts at the same exact body fat percentage (10%) yet 35lbs heavier (195lbs), running a 4.4s 40, with between 30-40% improvements in each of his lifts including his bench press, his squat, his deadlift, his cleans, and his snatch.

As I trained side-by-side with Kris during this time, I know exactly how he trained and ate. In fact, as roommates, we did the same exact workouts and ate the same exact meals. We trained about 10-12 hours per week, mixing max and dynamic effort days with speed work on the field, on the track, and even on a cycle ergometer. We also ate about 5000 calories per day.

So what's the point of these four examples? Why discuss the routines of 4 elite athletes and one washed up ol' nutrition coach?

Well, there are a few important points that I'd like you to take away.

At this point I'm gonna let you chew on those concepts for a while. After all, I don't want to rock your world too much with a single article! So hang tight, start to think about how these principles can work for you, discuss them here on the T-Nation forums, and in future articles, I'll delve into the specifics of G-Flux including both the science and the application of this critical concept.

However, in the meantime, lest you start thinking that G-Flux is only for elite athletes, I want to share one more client story with you.

Fennell, as we call him around here, is a landscape architect and a front man/keyboardist for Wonderjack, a rock band (coming out with a new EP in Feb). Read that – he's a full time architect AND a musician in his free time. So I don't want to hear no lip about how you just don't have the time to do more exercise!

When Fennell first got motivated to do something about his body, he stood in front of the mirror at 5'8" and 127lbs and about 10% body fat. When he turned sideways, he disappeared. When he took a shower, he had to jump around to get wet. In short, Fennell needed to put on some size – and badly!

After using some of the nutrition and training advice he found here at T-Nation and after working with my coaching team for the last year, Fennell now tips the scales at 167lbs and 10% body fat.

How did he accomplish this? How did he gain 40lbs, while remaining relatively lean throughout (his body fat never once went above 12% throughout this entire process)?

Through the principles of G-Flux.

When asked about the routine, Fennell tells me: "I just feel so great exercising and eating as much as I am right now."

And when pressed about the changes: "It's especially fun to go to events and see friends that I haven't seen for years. At one of my band's gigs, an old friend who I used to "gig with" did an opening set for us. He started his set by saying "Yep, I used to play in a band with Fennell way back in the day. Since that time, I've gotten fat, and Fennell's gotten jacked."

And while Fennell doesn't consider himself "jacked" quite yet, he's a far cry from the 127lbs he started at. Plus, he's still getting better!

Special thanks to 3 great strength coaches - Matt Jordan of The Olympic Oval in Calgary and Jordan Strength - Stu McMillan, Strength and Speed Coach for the US Bobsled Team - and Carter Schoffer, Science Link Head Strength and Nutrition Coach. These guys are at the top of this field and I appreciate their valuable contributions to this article.

Healthy, muscle-building food doesn't have to be bland and boring. These cooking tips are worth learning. Check 'em out.
Diet Strategy, Feeding the Ideal Body, Nutrition & Supplements
Ken Kinnan November 15 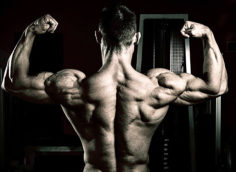 Should I bulk or cut? It's a common (and annoying) question. Here's what you need to know before making your decision.
Bodybuilding, Diet Strategy, Feeding the Ideal Body, Nutrition & Supplements
Paul Carter April 23