I have to admit, the concept behind the paleo diet is downright beautiful. It’s so nice and tidy, romantic even. And the rules are so clearly defined! What to eat. What not to eat. It seeks and sometimes finds shelter from most criticism in its anthropological, genetic, and biochemical constructs. It lets followers feel pious, smart, and presumably healthy, all at the same time!

Add all that together and you’ve got a marketer’s dream. Of course, paleo-style eating is also any cult-leader’s dream in that its followers have adopted its tenets without continuing to ask questions about its wisdom or merits. And that ain’t good.

Back in the 70’s, a group of well-meaning nutritionists shook their heads over the prevalence of many modern diseases, most notably diabetes, obesity, heart disease, cancer, Crohn’s, and inflammation in general. Perhaps out of frustration, they flipped through the historical records for time periods when those diseases were rare or nonexistent and looked for dietary correlations.

What they found was the Paleolithic period and its “hunter-gatherers.” They saw, or at least envisioned, a period where men were tall, lean, agile, and muscular, kind of like slightly more scruffy versions of Keanu Reeves, and with preternatural levels of insulin, glucose, and blood fats to boot.

Their research indicated that humans of this period subsisted largely on meat and fish, some fruits, lots of vegetables, eggs, and nuts, but the diet is better defined by what they presumably didn’t eat, such as cereal grains, dairy products, legumes, refined sugar, and processed foods.

Since they weren’t eating anything remotely processed or that allegedly contained inflammatory proteins or ingredients, they presumably didn’t suffer from the various health problems often afforded by those foods.

They also assumed that since man – except for some better haircuts – hadn’t appeared to have physically changed or evolved much since then, that this kind of diet would work equally well for people today.

A whole lot of people have accepted the argument and adopted the diet. In fact, today’s “orthodox” paleo person won’t eat anything that was unavailable to those stone-age hunter-gatherers, including, despite its misleading title, Flintstone’s Fruity Pebbles. 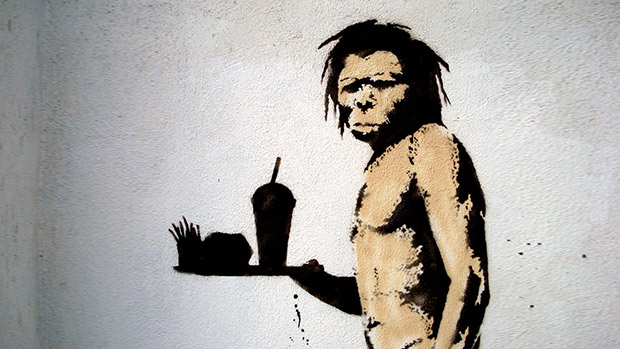 The Problems With Their Argument

The simplest argument against the assertions of paleo advocates, the one that makes you go “hmm,” is that if prehistoric man was so healthy, why did he rarely lived beyond the age of 40? Most of them actually died before they hit 15.

You could, of course, chalk that up to a whole bunch of circumstances that had nothing to do with health. Rampant predators. Loose boulders. Being struck in the head with a club. No nationalized healthcare.

But there’s also some evidence that they might not have been so healthy. A study in The Lancet detailed the results of post-mortem autopsies on the mummified remains of 137 people from societies of farmers, foragers, and hunters-gatherers from around the world. They found that 47 of them had atherosclerosis – arteries jammed up with fat, cholesterol, and plaques – which the paleo diet is supposed to guard against.

Ancient peoples probably did, however, have fewer cases of cancer and diabetes, but those diseases are generally associated with old age. Chances are most paleo people died of something else before they were old enough to develop cancer or diabetes.

2 – Food in general was very different back then

Modern paleo eaters attempt to mimic the vegetable-eating ways of their ancestors, but it’s difficult to ascribe their alleged health to the vegetables they ate because the vegetables were so very different from what we eat today.

Potatoes were tiny, gopher-turd sized things, no bigger than peanuts. Tomatoes looked more like cherries. Cucumbers were hard and spiny. Peas had to be roasted and peeled before eating because they were otherwise indigestible. Corn kernels were hard as pebbles, growing in tiny little clusters. Broccoli, Brussels sprouts, and cauliflower didn’t exist. Carrots were meager and gnarled. Beans had high amounts of cyanide.

Sure, you could have lots of vegetables, but you had to really want it. I doubt if today’s paleo dieters would have the patience for it. The vegetables we know today didn’t start to appear until the Neolithic. As such, it’s difficult to pin the supposed health of paleo people on their vegetable eating habits.

3 – We don’t really know, in general, how paleo people ate

Furthermore, there’s no quintessential paleo person. It defies logic to think that desert dwellers or those that live in frigid conditions ate the same diet and proportions as someone who lived in more temperate climes. Diet must have likewise varied enormously simply because of season or opportunity.

The very fact that people survived the paleo period is living testament to man’s ability to thrive in almost any ecosystem and not because he ate a specific diet. 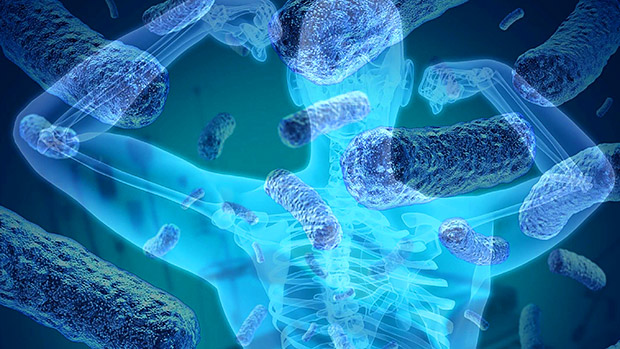 4 – People (along with plants and animals) have evolved

Likewise, blue eyes didn’t show up until the last 6,000 to 10,000 years ago and natural selection has made us more resistant to a host of insect-born diseases. But that’s paltry stuff compared to what’s been going on in our guts. Our microbiome – the 500 to 1,000 different species of bacteria in our gut – is evolving constantly, helping us digest foods that would otherwise be impossible to break down.

Now it’s currently impossible to decipher the exact paleo microbiome, but given what we know about bacteria and the way they constantly mutate, it’s probably safe to assume that our guts are very different from their guts and can easily handle, in most cases, modern food.

Besides, as mentioned earlier, the vegetables our ancestors ate were very different from what we ate. Drawing correlations is difficult and foolhardy.

5 – A worrisome lack of polyphenolic diversity

Polyphenols are chemicals found in plants that are often collectively called phytochemicals. Depending on what source you believe, there are between 500 and 8,000 of them and they are, individually and probably collectively, probably more important to human health than the vitamins and minerals they contain (assuming you get vitamins and minerals from other sources).

There are four broad types of polyphenols: stilbenes, phenolic acid, flavonoids, and lignans. Many of them are found in grains, legumes, and fruits, which are all things strict paleo people avoid, or limit.

This is a serious problem. For optimum health, you want to ingest representatives of all of these polyphenol groups in big, horn-of-plenty amounts. 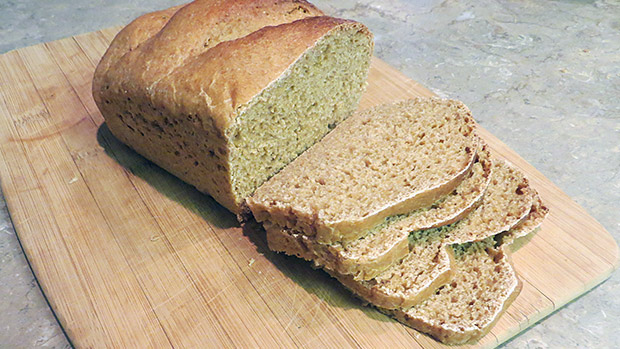 Paleo eaters avoid all grains, reasoning that, among other things, they’re inflammatory. Now it’s certainly true that the wheat protein gluten contains a protein fraction known as gliadin, which acts as an antigen, stirring up inflammatory responses in not only gluten sensitive people, but as the paleo people contend, all people.

They, along with anti-gluten people in general, also maintain that gliadin is an addictive opioid, a dietary Siren coaxing and luring people to eat more and more bread until victims crash their newly-grown fat asses against the rocks.

This is why some of them will accept einkorn wheat, which was one of the first grains to be cultivated some 9,000 to 10,000 years ago. The gliadin it contains might not be as “toxic” (einkorn wheat has only 14 chromosomes, as compared to the 28 found in modern wheat, which alters its gluten structure) as other strains.

Still, is gliadin in general a problem? I suppose, if you have celiac disease or are gluten sensitive in general, but maybe not so much if you’re not. As I wrote in The Not-So Ugly Truth About Gluten, the true problem might lie in FODMAPS (Fermentable Oligosaccharides, Disaccharides, Monosaccharides, and Polyols), which paleo people generally get little of because of their restrictive diet.

Contrary to paleo (and anti-gluten) dogma, though, the wheat breeding of the 20th century, particularly of durum wheat, has resulted in grain that has marked decreases in gliadin expression (2).

As far as gliadin’s purported opioid properties, the concept itself might be a hallucination. Gluten can be divided into two protein fractions, gliadin and glutenin, and it’s true that gliadin (called gliadorphin), when injected directly into the blood of rats, acts like an opiate. However, research says the human intestine can’t absorb gliadorphin.

To be fair, paleo dieters avoid grains for a whole host of other reasons, too, including nutrient-blocking phytates, pesticides, fertilization, and fears of genetic engineering and hybridization. Some of those fears are justified while others are overblown. Still, avoiding all wheat and grain products and losing out on their nutritional benefits might not be worth it. 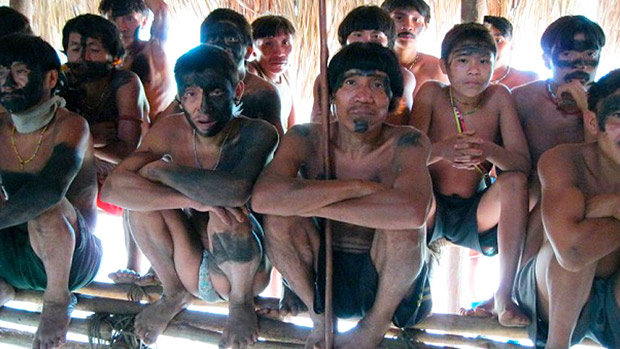 Surprisingly, there still exists a group of people who live as true hunter-gatherers, and no, despite thinking of themselves as primal beings, it’s not the guys who go to Whole Foods to “gather” ancient sprouted maze flakes, kelp granules, or guac-kale-mole.

They’re called the Hiwi and there’s about 800 of them living in thatched huts in Colombia and Venezuela. They hunt for animals in the forest. They fish. They eat roots, palm nuts, palm hearts, several different types of fruit, a local wild legume, and honey. They do, however, grow a few meager crops (plantains, corn, and squash), which doesn’t fit the hunter-gatherer profile, but otherwise, they come damn close.

Unfortunately, they’re not very healthy. They’re short, thin, and lack energy. They complain about being hungry all the time. Only 50% of their children live past 15. You begin to wonder what they’d give to have a Mickey-D’s nearby, one that accepted gourds in lieu of cash. While the Hiwi are only one example, it hardly shines a flattering light on the hunter-gatherer lifestyle. 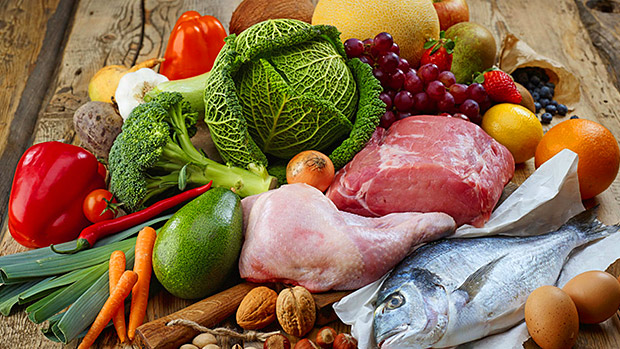 The Good Things About Paleo

Strict paleo people are probably much leaner than average Americans. Of course, this is probably true of strict followers of almost any regimented diet for the simple reason that the dieters pay attention to what they eat. Weight loss invariably ensues.

Likewise, paleo people are probably exposed to far fewer pesticides and chemicals. While there’s no way to absolutely know if that leads to great health, it sure makes sense. And, by avoiding processed foods, they’re certainly not going to increase their chances of developing cancer, heart problems, Alzheimer’s, or a variety of other modern diseases.

Kudos to them for all that, but it also makes sense that when you avoid big categories of food, you’re making a serious wager – putting down serious money for the huge, 50 to 1 underdog, Pebbles Loves Bam-Bam, to win. The risk may not be worth it, especially since – if history proves anything – humans are complex and humans adapt.

“Ultimately – regardless of one’s intentions – the paleo diet is founded more on privilege than on logic. Hunter-gatherers in the Paleolithic hunted and gathered because they had to. Paleo dieters attempt to eat like hunter-gatherers because they want to.”

Does the Paleo Diet Belong Back in the Stone Age?

After the Paleolithic period came the Neolithic period, which was characterized by the development of agriculture and polished stone implements. From them and their incessant pre-Mendelian genetic engineering came most of the vegetables we eat today. They were also the first ones to practice animal husbandry and introduced dairy foods (and slowly developed lactose tolerance).

Maybe we should look to them as dietary role models. They were far more likely to eat a balanced diet, ingesting nutrients from a wide variety of meats, fruits and vegetables, and yes, grains, legumes, and even dairy.

The only “processed” foods they ate were cheese, yogurt, or jerky. The bread they ate probably looked a lot like Ezekiel bread or Dave’s Killer Bread. In fact, the Neolithic diet is pretty much wholly compatible with all the modern rules of good nutrition, so if you want an ancient diet that makes a whole lot of sense, look back about 5,000 years instead of 10,000.